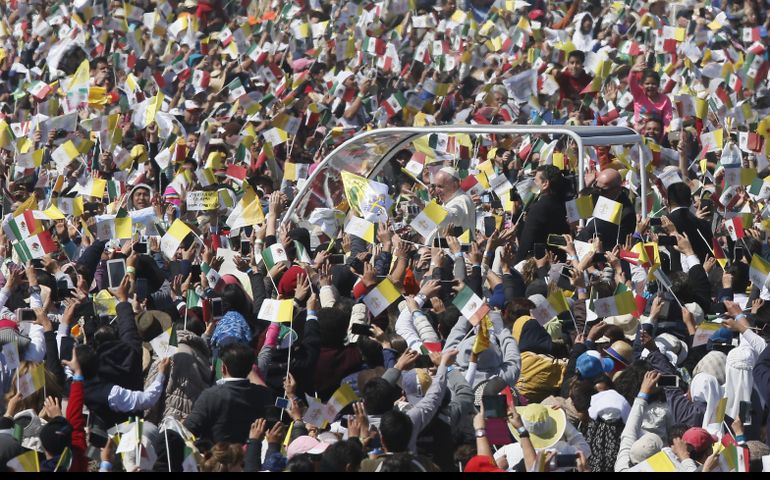 Pope Francis greets the crowd as he arrives to celebrate Mass in Ecatepec near Mexico City Feb. 14. (CNS photo/Paul Haring)
This article appears in the Francis in Mexico feature series. View the full series.

Ecatepec, Mexico — Pope Francis continued his six-day Mexican tour Sunday with a visit to this crime-plagued Mexico City suburb to launch a blistering critique against the tripartite temptations of wealth, vanity and pride -- which he said "lock us into a cycle of destruction and sin."

Traveling about 20 miles north of the modern downtown of the country's capital, the pontiff celebrated a Mass amid simple homes and small street shops in an area of the country that has been suffering from staggering violence, especially against women.

In a homily to a crowd of an estimated 1.5 million who live in the area, many of whom commute each day to the capital for work, Francis seemed to be speaking less to them than to those in Mexico City who maintain a market system that leaves many without what they need.

Saying that the three temptations "seek to destroy what we have been called to be," the pontiff was particularly harsh towards wealth, which he said is "seizing hold of goods destined for all, and using them only for "my own people.'"

It is "'taking the 'bread' based on the toil of others, or even at the expense of their very lives," said the pope. "That wealth which tastes of pain, bitterness and suffering -- this is the bread that a corrupt family or society gives its own children."

Vanity, he said, is "the futile chasing of those five minutes of fame that do not forgive the 'reputation' of others." And pride: "Putting oneself on a higher level than one truly is on, feeling that one does not share the life of 'mere mortals.'"

Francis was speaking Sunday in an overwhelmingly crowded outdoor Mass on the grounds of Ecatepec's University of Higher Studies. Some 300,000 were estimated to be at the Mass site, with at least a million more more lining the route from there to the local airport, where the pope arrived by helicopter.

Many inside the university space had slept overnight in near-freezing temperatures to secure their spot for the celebration, with some traveling long distances for the opportunity. One woman, carrying a small child, said she had traveled 20 hours by bus from Yucatan, some 900 miles to the southwest.

Ecatepec is a city in the Mexican state of Mexico, which surrounds the country's capital to the east, north and west. The city, which has a population of some 1.7 million, is one of several in the state which has been experiencing horrific violence against women.

According to statistics from Mexico's National Citizens Observatory on Femicides, a coalition of 43 groups that document serious crimes against women, 1,258 girls and women were reported disappeared in the state in 2011 and 2012.

In one heated off the cuff moment in his homily, Francis made a sharp comment that seemed like a reference to the violence in the area.

"We have chosen Jesus, not the evil one," said the pontiff, almost yelling in passion. "Let's get this straight in our heads: You can't dialogue with the Devil!"

One young woman at the Mass Sunday saw Francis' visit to the area as an intentional sign of his care for the people there.

"The pope comes to people who need him," said Alexa Olguin, who had traveled from the neighboring state of Hidalgo. "For that reason, he does not just come to Mexico City; he comes to Ecatepec."

The violence in Ecatepec has affected young women the most. The Observatory on Femicides reported that 53 percent of women disappeared in 2011 and 2012 were between the ages of 10 and 17.

Over the same period, the observatory said 448 women were murdered in the state. The organization said that the bodies of the dead are frequently mutilated and left in public parks and streets.

Francis focused his homily Sunday on the practice of Lent, saying that because the liturgical season is a time of conversion he wanted to "unmask three great temptations that wear down and fracture the image which God wanted to form in us."

The pope said that God dreams of being a father to all humanity, "of brotherhood, of bread broken and shared."

"Lent is a time of conversion, of daily experiencing in our lives of how this dream is continually threatened by the father of lies, by the one who tries to separate us, making a divided and fractious society," said Francis. "A society of the few, and for the few."

"How often we experience in our own lives, or in our own families, among our friends or neighbors, the pain which arises when the dignity we carry within is not recognized," said the pope. "How many times have we had to cry and regret on realizing that we have not acknowledged this dignity in others."

After outlining the temptations, the pontiff said we should use Lent to ask ourselves: "How much have we become accustomed to a lifestyle where we think that our source and life force lies only in wealth?"

"For this reason, the Church gives us the gift of this Lenten season, invites us to conversion, offering but one certainty," said Francis. [God] is waiting for us and wants to heal our hearts of all that tears us down."

"He is the God who has a name: Mercy," said the pope. "His name is our wealth, his name is what makes us famous, his name is our power and in his name we say once more with the Psalm: 'You are my God and in you I trust.'"

As in Mexico City, anticipation for Francis' visit to Ecatepec was very high. Crowds were standing in risers along the street for miles on the way to the Mass site at least five hours early, wrapped in warm clothing for the 40-degree weather.

Bandstands were set up along the route, with local bands playing to entertain the crowds. Many make-shift signs welcomed the pope, with one exclaiming: "Pope Francis, your spirit of peace illuminates Ecatepec."

Some of the economic desperation could be witnessed in the drive north from the capital, with almost every billboard and advertising space facing that direction empty. One of the billboards on the edge of Ecatepec advertised for a man who disappeared two years ago, saying the family was still seeking justice.

In remarks before the prayer, he quoted Pope Paul VI's 1970 message on the 75th anniversary of the crowning of Our Lady of Guadalupe, in which the former pontiff called on Mexican Christians to "always be on the front line of all efforts ... to improve the situation of those who suffer need."

"I invite you once again today to be on the front line," said Francis.

"To be first in all the initiatives which help make this blessed land of Mexico a land of opportunities, where there will be no need to emigrate in order to dream, no need to be exploited in order to work, no need to make the despair and poverty of many the opportunism of a few," the pope continued.

"A land that will not have to mourn men and women, young people and children who are destroyed at the hands of the dealers of death," he said.

Francis is visiting Mexico through Wednesday. He continues his visit Sunday afternoon by traveling back to Mexico City for a visit to a local pediatric hospital.

On Monday, the pope will fly south to visit two cities in the southern state of Chiapas on the Mexican-Guatemala border. He will celebrate Mass with Mexican indigenous communities and host a meeting with families.