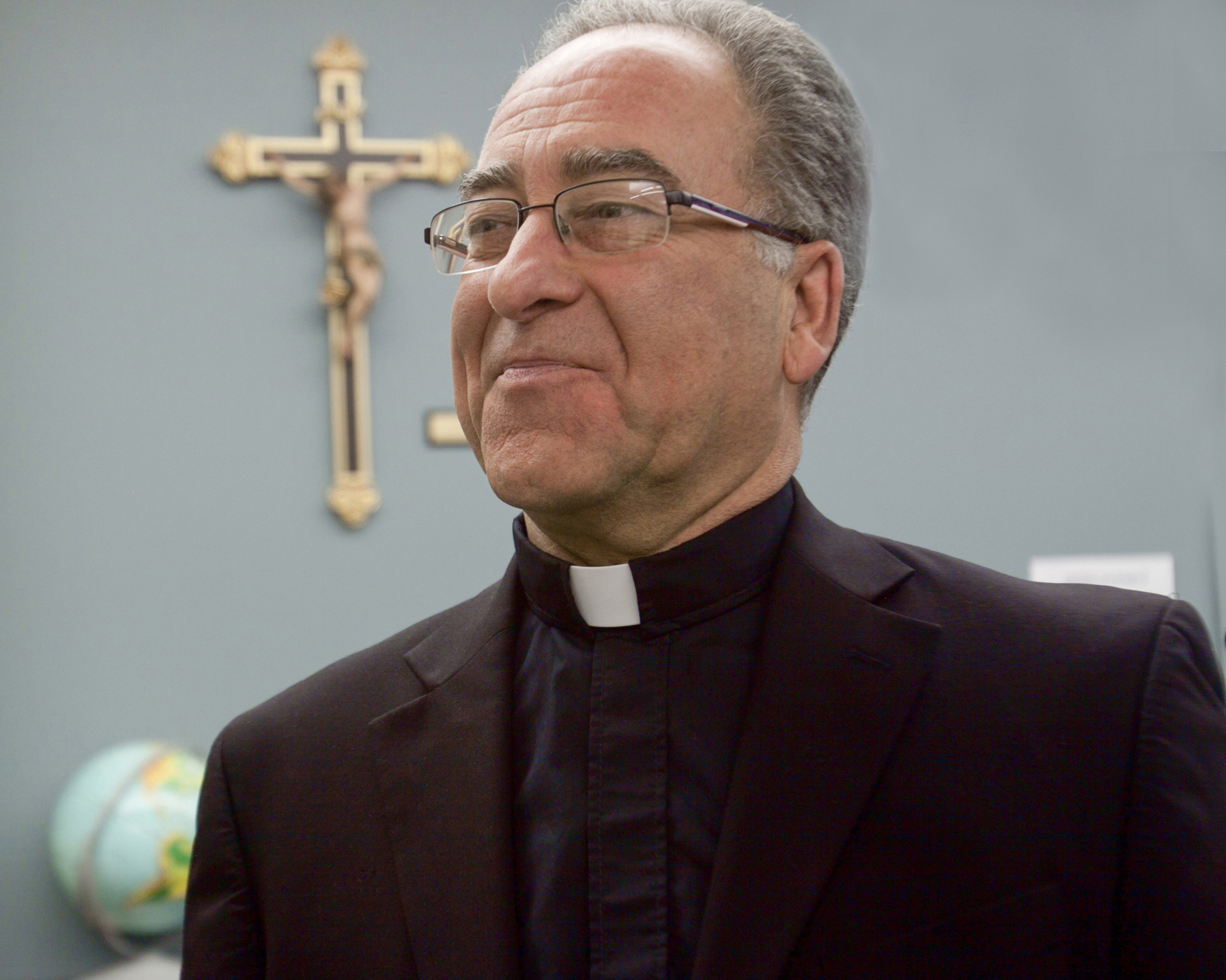 Pope Francis has named Auxiliary Bishop Myron J. Cotta of Sacramento, Calif., to succeed Bishop Stephen E. Blaire of Stockton, Calif. On Jan, 23, the pope accepted the resignation of Bishop Blaire, who is 75, the age at which canon law requires bishops to turn in their resignation to the pope. Bishop Cotta is pictured in a 2014 photo. (CNS/Diocese of Sacramento)

Pope Francis has accepted the resignation of Bishop Stephen Blaire of Stockton, California, and named Auxiliary Bishop Myron Cotta of Sacramento, California, as his successor.

Blaire, a native of Los Angeles, has headed the Stockton Diocese since his 1999 appointment by St. John Paul II. He is 75, the age at which canon law requires bishops to turn in their resignation to the pope.

Cotta, who will turn 65 March 21, was named an auxiliary bishop of the Sacramento Diocese by Francis in 2014. A native of Dos Palos, California, the bishop speaks English, Portuguese and Spanish. He was ordained a priest of the Diocese of Fresno, California, in 1987.

The changes were announced in Washington Jan. 23 by Archbishop Christophe Pierre, apostolic nuncio to the United States.

Cotta's installation as the sixth bishop of Stockton will take place March 15 in the Cathedral of the Annunciation in Stockton. Until then Blaire will serve as apostolic administrator of the diocese.

"The Holy Father has made my life a little more difficult," Sacramento Bishop Jaime Soto said in a statement, but he was "still delighted" to announce the pope's appointment of Cotta to succeed Blaire.

"The people of God in the Diocese of Stockton will receive a son of the Central Valley who has a pastor's heart. He will be a blessing for the church of Stockton. We will miss him in Sacramento," he added.

Soto also thanked Blaire "for being an exemplary pastor of souls during his many years of shepherding the people of God in Stockton. The whole state of California has benefited from his leadership. The Catholic bishops of California have enjoyed his fraternal support. I wish him well in his much-deserved retirement."

Cotta said it was "humbling and an honor to be called by God to this ministry of service to the church, in particular to the Diocese of Stockton."

"As I prepare to leave the Diocese of Sacramento, I thank God for the call to the episcopacy and for the many blessings that I have experienced over 30 years of ordained priesthood among God's people within the Central Valley of California," he said at a news conference in Stockton.

"I thank God for the opportunity to have served and shared the ministry of auxiliary bishop under Bishop Jaime Soto, along with the clergy, religious and laity of the Diocese of Sacramento," he added. "This experience has significantly contributed to my ongoing pastoral formation."

Born March 21, 1953, Cotta attended St. John's Seminary in Camarillo, California, from 1980 to 1987, receiving a bachelor's degree and master of divinity degree. His assignments after his Sept. 12, 1987, ordination for Fresno, included as parochial vicar at St. Anthony in Atwater (1987-1989); administrator of Our Lady of Fatima Shrine in Laton (1989-1992); and pastor of Our Lady of Miracles in Gustine (1994) as well as administrator at Holy Rosary Parish in Hilmar that same year.

Since 1996, he has served on the Fresno Diocese's board of trustees, the priests' retirement board and personnel board. Since 1999, he has been vicar general and moderator of the curia, and served in other capacities for the diocese including as vicar of clergy, director of continuing formation of the clergy, director of the Propagation of the Faith and supervisor of the safe environment program.

Born Dec. 22, 1941, in Los Angeles, Blaire graduated from St. John's Seminary in Camarillo in 1967, where he earned a master's in theology. He also has graduate degrees in education and secondary school administration.

He was ordained to the priesthood April 29, 1967, for the Archdiocese of Los Angeles. His first assignment was as associate pastor at St. Luke's Church, 1967-1972.

He then became a high school teacher and administrator at Alemany High School (1972-1976), and was vice principal for a year at Bishop Amat High School, then Alemany's principal from 1977 to1986.

On the national level, Blaire has served as the chairman of the U.S. Conference of Catholic Bishops' Committee on Pastoral Practices and has been a member of the Committee for Ecumenical and Interreligious Affairs. In 2009, he was elected to a term as chairman of the USCCB Committee on Domestic Justice, Peace and Human Development.

Blaire has been president of the California Catholic Conference, the public policy arm of the state's Catholic bishops.

The Diocese of Stockton is comprised of more than 9,900 square miles in the state of California and has a total population of 1.38 million people, of whom 298,061 or 22 percent, are Catholic.