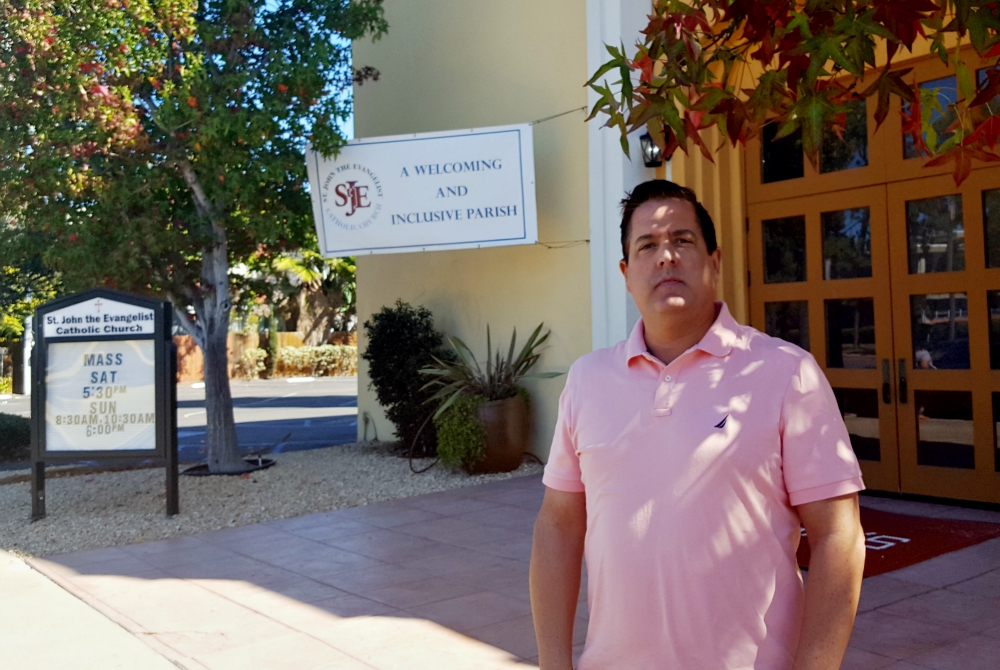 The pastoral associate of a San Diego parish in the heart of the city's well-known gay-friendly Hillcrest neighborhood has submitted his resignation "out of fear for my family and myself."

In an Oct. 19 email to friends and associates, Aaron Bianco, who submitted his resignation to Bishop Robert McElroy, said he had "endured physical and emotional violence from groups like Church Militant and LifeSite News for the past year and a half." The harassment included slashed tires, death threats, attacks outside Mass, and "hundreds of letters, phone calls and emails."

The harassment increased "to another level" overnight Oct. 14-15, he added, when assailants "broke into the office/rectory" of St. John the Evangelist Parish "and spray-painted 'no fags' on the conference room wall."

The "final straw," he said, was an Oct. 17 internet posting of "pictures of my family, including a photo of my deceased mother" and revealing "where I live."

McElroy and Bianco have been the target of a previous LifeSiteNews article.

In his Oct. 19 email (see below for full text), Bianco said he is considering "hiring legal counsel to stop the slander against me."

Self-described as "a research and education organization dedicated to the defense of the Catholic Church against assaults from without as well as from within," the Lepanto Institute launched an online petition asking McElroy to fire Bianco.

Both the FBI and the San Diego Police Department are investigating the St. John the Evangelist break-in.

FBI Special Agent Jeanne Schnese, who is assigned to the parish case, told NCR on Oct. 19 that the federal agency "has a one-voice policy" and that she had referred NCR requests for information to the FBI San Diego media coordinator.

Bianco told NCR that law enforcement officials had provided him with a form to file for a concealed weapon permit and that he had filed it.

In an Oct. 17 media statement about "the vandalism at the parish St. John the Evangelist in Hillcrest and the social media attacks against one of its staff members," McElroy condemned the vandalism as "vile and reprehensible" and pledged "solidarity with the staff and community of St. John's Parish at this moment."

"The hatred that lies behind them constitutes a dark and vicious corner in the life of our Church that every member of the Catholic community must reject," he stated.

Bianco's email reported he had submitted his resignation during an Oct. 18 meeting with McElroy.

"He has always stood behind me 100%," he added. "I am always thankful for his steadfastness to keeping the LGBT Ministry going at St. John's, even though he also has been disparaged by these hate groups."

Bianco emailed that he plans to address the parish community this Sunday at the 6 p.m. Mass, his only planned public appearance before his resignation takes effect Oct. 31.

Writing that he "will not back down from confronting such evil in our Church," Bianco said he intends "to work on a larger scale to make sure groups like this do not make their way into the lives of everyday Catholics."

Meanwhile, the San Diego Diocese has been in the midst of eight "listening sessions" with McElroy about the church sexual abuse crisis, the sessions staged across the see of 1.3 million Catholics that runs the length of California's border with Mexico.

According to multiple sources, questions about a homosexual man in a same-sex marriage being a primary administrator at a diocesan parish were raised at all the gatherings.

At the seventh session on Oct. 18 at St. Gabriel Parish in Poway, McElroy received a scattering of boos when he said, "If the church eliminated all the employees who are not living out the teachings of the church in its fullness, we would be employing only angels."

More than 300 attended the Poway session, packing the parish hall. Each of the meetings has drawn overflow crowds.

At nearly every meeting, security personnel have had to escort someone from the room for disruptive behavior.

At Poway, a man was forcibly removed after he stood and began shouting questions at McElroy. Crowd noise drowned the questions.

NCR sent inquiries to the Lepanto Institute and LifeSite News by email. No immediate response was received from LifeSite.

“Someone who is in a same-sex ‘marriage’ has no more business working in leadership roles in the Catholic Church than does a satanist. Let’s be clear, same-sex ‘marriage’ is a satanic mockery of the sacrament of Holy Matrimony, and those engaged in such abominable behavior should never have been hired to begin with,” a spokesman from the Institute told NCR in an email.

Following is the text of Aaron Bianco's Oct. 19 email message to friends and associates:

As most of you know, I have endured physical and emotional violence from groups like Church Militant and LifeSite News for the past year and a half. As I wrote earlier in the week, they have slashed my tires, left me death threats, physically attacked me outside of mass and sent hundreds of letters, phone calls and emails. This past week they took it to another level. They broke into the office/rectory and spray painted "no fags" on the conference room wall. Then, on Wednesday, LifeSite News and the Lepanto Institute published an article about me. This was the final straw. They posted pictures of my family, including a photo of my deceased mother, stated where I live, and went back years to try and find anything on me. All of this is done to intimidate and scare me into resigning. These groups are no different then organized crime. They have gone after me relentlessly hoping to bring me to my knees. These groups, and those who act on their rhetoric must be stopped! We cannot allow this to continue in a Church that was founded on Jesus' message of love and acceptance. I will be looking at hiring legal counsel to stop the slander against me.

I met with Bishop McElroy yesterday to discuss the recent articles and events. He has always stood behind me 100%. I am always thankful for his steadfastness to keeping the LGBT Ministry going at St. John's, even though he also has been disparaged by these hate groups.

During our meeting, I submitted my resignation. My resignation will be effective on October 31, 2018. I am doing this out of fear for my family and myself. These groups have proven they cannot disagree with me in a respectful way. That being said, I will not back down from confronting such evil in our Church. I intend to work on a larger scale to make sure groups like this do not make their way into the lives of everyday Catholics.

This coming Sunday the 21st I will be speaking at the 6:00pm mass. It will be the only time I make any kind of public appearance before I leave St. John's. I know it is late notice but I hope to see as many of you as possible. I am leaving St. John's in good hands and I have been assured that Bishop McElroy will ensure the ministry we have begun at St. John's will stay active and flourish.

I personally want to thank all of you for everything you have done and are doing to build a Church that is inclusive, loving and welcoming to all of God's children. It is with sadness that I say farewell to St. John's and the ministry that [Auxiliary] Bishop [John] Dolan and I started just over two years ago. I am not saying goodbye to you. Please keep in touch as we continue to fight for justice.

Please be assured of my prayers for you. I am also asking you to pray for St. Johns, myself, and all those in my life whom have been put through hell at the hands of these 'Catholic' groups.

For those of you who do not have my personal email address, I will be using this email address to continue my work on behalf of my LGBTQ brothers and sisters who are longing to come home.