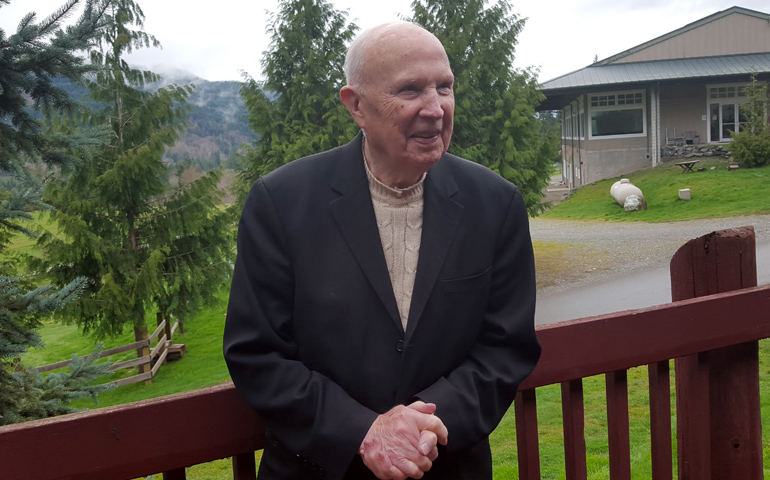 Thought by many to be the oldest active Catholic priest in the country, Fr. William Treacy died Oct. 16 at the age of 103.

An ecumenical and interfaith pioneer, Treacy was a well-known Pacific Northwest media personality, the co-founder of a 200-acre facility dedicated to interreligious dialogue, a sought-after speaker, a widely read author, and beloved pastor.

Born on May 31, 1919, in Killasmeestia, County Laois, in rural east-central Ireland, Treacy in mid-September concluded nearly a year of popular weekly Sunday liturgies via Zoom from his home at Camp Korey in Mount Vernon, Washington.

The Irishman emigrated to the Seattle Archdiocese in 1944 "on loan" from his home diocese to help with the priest shortage resulting from the world war. He was eventually incardinated into the archdiocese.

Treacy's views and work in ecumenical and interreligious dialogue were hewn, refined and polished, he often said, in large part through his close friendship with Raphael Levine, former leader of Seattle's Temple De Hirsch.

Treacy and Levine were introduced in 1960 when the rabbi and the local ABC television affiliate approached the archdiocese with the idea of creating a television program that would deal with religious and social issues through the lens of interreligious dialogue.

Then-Archbishop Thomas Connolly tapped Treacy, at the time director of the Catholic Information Center, to follow through.

"Challenge" was born. Treacy and Levine were the program's mainstays through the prime-time, award-winning program's 14 years. The pair also collaborated on eight books. Levine died in 1985.

A close friend of Treacy, retired Fr. James Dalton once described the late priest as "a Northwest icon of ecumenical and interfaith dialogue for more than 50 years."

"He has been legendary in his ability to unite people of varying faith perspectives," Dalton said in 2016. "To talk with him even only once is to form a lasting friendship."