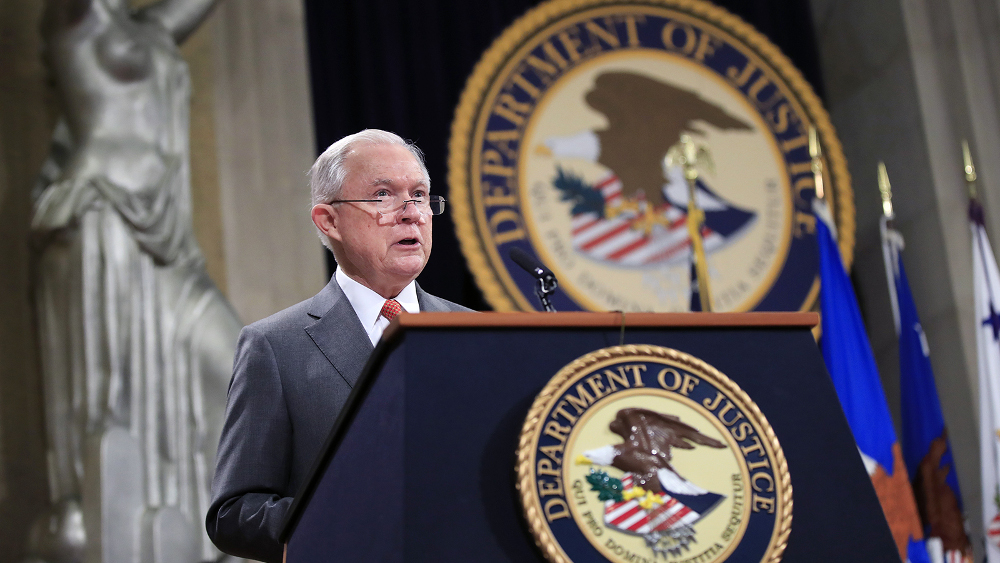 Attorney General Jeff Sessions speaks during a Religious Liberty Summit at the Department of Justice on July 30, 2018. Sessions says there’s a “dangerous movement” to erode protections for Americans to worship and believe as they choose. (AP/Manuel Balce Ceneta)

Attorney General Jeff Sessions announced during a Department of Justice summit in Washington that he is creating a religious liberty task force to challenge what he called a dangerous movement "eroding our great tradition of religious freedom."

Sessions said Monday (July 30) the task force is an outgrowth of President Trump's executive order directing agencies to protect religious liberty, and he said it would help Justice Department employees remember that it is their duty to accommodate people of faith.

"This administration is animated by that same American view that has led us for 242 years — that every American has a right to believe and worship and exercise their faith in the public square," Sessions said at the summit. The Trump administration spent last week emphasizing religious freedom in a three-day State Department summit.

"Religious Americans are no longer an afterthought," he said. "We will take potential burdens on one's conscience into consideration before we issue regulations or policies."

Speaking at the summit alongside Sessions were a host of religious leaders, including Roman Catholic Archbishop Joseph Kurtz, who chairs the Committee for Religious Liberty at the U.S. Conference of Catholic Bishops, as well as Jack Phillips, the Colorado baker who won a Supreme Court case after refusing to bake a cake for a gay couple's wedding.

During a panel discussion, a host of religious leaders described their personal religious liberty battles. They included a Chabad rabbi who fought opposition to his building a synagogue in Boca Raton, Florida, a Sikh lawyer who refused to shave his beard and take off his turban to accept a job, and Phillips, the evangelical Christian who wouldn't bake the cake.

The summit examined the controversial issue of religion-based service refusals to LGBTQ Americans head on.

Sessions praised Phillips for his "bravery" in his Masterpiece Cakeshop legal challenge. Others, including Kurtz and Heritage Foundation executive Emilie Kao, said the country ought to defend the rights of faith-based adoption agencies to refuse to allow same-sex couples to adopt children.

Without ever referring to LGBTQ people explicitly, Kurtz alluded to the need to protect faith-based adoption agencies' desires to deny service to gay or lesbian couples because of the Catholic faith's opposition to same-sex relationships.

The Human Rights Campaign, a gay rights advocacy and political lobbying group, responded quickly, as did Americans United for Separation of Church and State.

"This taxpayer funded task force is yet another example of the Trump-Pence White House and Jeff Sessions sanctioning discrimination against LGBTQ people," said HRC Legal Director Sarah Warbelow in a statement.

The Alliance for Defending Freedom, a conservative legal firm that defended Phillips, immediately issued its own release congratulating Sessions and his religious liberty initiative.

"Too many of the clients ADF represents are risking their businesses, their life savings and their safety to follow their conscience," the statement said. "All Americans should be free to peacefully live and act consistent with their convictions and faith without threat of government punishment."