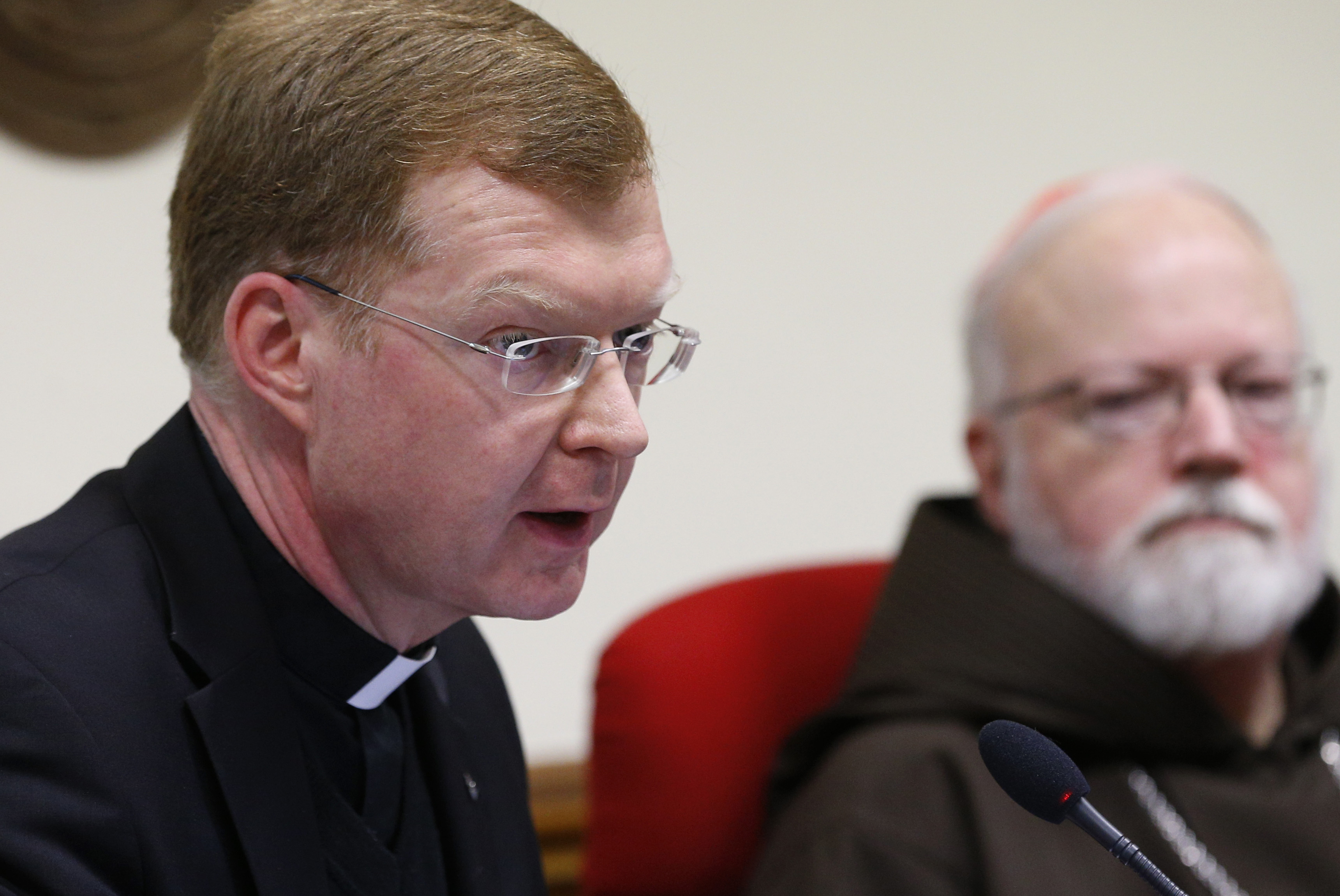 Jesuit Fr. Hans Zollner, president of the Center for Child Protection, speaks in 2015 at the Pontifical Gregorian University in Rome during a news conference officially launching the Center for Child Protection in Rome. During a late August visit to Australia, he said victims of clergy sexual abuse primarily want the church hierarchy to listen to them and understand the depth of their suffering. (CNS/Paul Haring)

The president of the Pontifical Gregorian University's Center for Child Protection said most of the victims of clergy sexual abuse whom he has met primarily want the church hierarchy to listen to them and understand the depth of their suffering.

"All concur in this, that the most important single element in a possible healing process, is being really listened to ... all say this is the starting point, Jesuit Fr. Hans Zollner told The Catholic Weekly, newspaper of the Archdiocese of Sydney, during an interview in late August.

The priest was in Australia to attend a conference on clergy sexual abuse.

Zollner, who also is a member of the Pontifical Commission for the Protection of Minors, also said the Catholic Church "can't ever do enough" to address the problem of clergy sexual abuse.

He credited the church in Australia for its effort to respond to allegations of abuse and its steps to prevent abuse, pointing to the development of resources, training materials and the development of staff. In addition, he said the Australian Catholic Church's acceptance of nearly all of the recommendations of the Royal Commission Into Institutional Responses to Child Sexual Abuse was a positive development.

Church leaders Aug. 31 accepted 98 percent of the commission's suggestions, but said they could not agree with recommendations that would violate the seal of confession.

In recent years, the Australian church has had to contend with the fallout from criminal charges against two high-ranking church leaders regarding cases of clerical sexual abuse.

Cardinal George Pell, head of the Vatican Secretariat for the Economy, is the most senior church official to face criminal charges in connection with child sexual abuse. He took a leave of absence from his position in summer 2017 to face charges of sexual abuse of minors from the 1970s, when he was a priest, and the 1990s, when he was archbishop of Melbourne.

Although Pell consistently has denied the charges, in early May, an Australian magistrate ordered him to stand trial, saying she believed there was enough evidence presented in connection with about half the original charges to warrant a full trial.

In the second case, retired Archbishop Philip Wilson of Adelaide is serving one year of home detention after being found guilty in May of failing to report child sexual abuse allegations in the 1970s.

Zollner said few studies have been done to identify the prevalence of sexual abuse among Catholic clergy and those that exist have been undertaken in a handful of countries, including Australia and the United States.

He said dioceses worldwide that have implemented safe practices programs, codes of conduct and abuse awareness training for staff, children and volunteers have found that "it works."

Media reports that sexual abuse is rife in the Catholic Church are inaccurate, Zollner added. He said most sexual abuse of minors, "by far," occurs within families.

"We cannot say it's more likely (among Catholic clergy) and people who say so can't present statistics," he said. "There is no other institution, there is no other Christian denomination or religion that has been investigated so thoroughly as the Catholic Church," he said.

"And even within professional groups, there is not research that would cover, for example school teachers in public schools ... psychologists, doctors, police, music or sports trainers. So we don't have a reliable number for comparing the number of Catholic priests, especially if you talk about the whole population of one particular profession."

In whatever way abuse occurs, Zollner explained, it can cause any victim to lose trust in others and rebuilding trust is difficult task for anyone to undertake.

"It destroys trust in oneself, in others and in God," he said.

"Then there are many questions that come around psychological disturbance, feelings of guilt," the priest continued. "There is very often some conflicting emotions and attitudes toward sexuality and the question is, quite often, how can one put together one's own identity in terms of what am I worth and can I venture into life that has been very often very much harmed by such kind of abuse early on?

Zollner also addressed commonly raised questions about homosexuality in the priesthood, the practice of celibacy by clergy and the role of clericalism as possible contributing factors to clergy sexual abuse.

While acknowledging that independent research in the U.S. has shown that 81 percent of clergy abuse victims are teenage boys and young men, Zollner said that "homosexuality ... does not lead automatically to abusive behavior, that is clear."

"I would add, from my experience and from what I've read, that not all people who have abused, not all priests, men who have abused boys, would identify themselves as homosexual. So they act out sexually, but they would also have heterosexual tendencies, or they would not identify as clearly and uniquely homosexually oriented," he said.

As for celibacy, Zollner said there is no "causal effect" between the practice and child sexual abuse. "The royal commission itself has stated so," he said.

"It may become a risk factor when celibacy is not lived out well enough over years, then it may lead people to becoming abusers of alcohol, abusers of internet pornography, abusers of adults or abusers of minors," he explained.

The Jesuit added, "The point is that mandatory celibacy is not a dogma, it can be changed."

He noted that 99.9 percent of all abusers are not priests and do not live a celibate life.

"Secondly," he added, "95 percent of all priests are not abusers so celibacy obviously does not lead to abusive behavior as such." He said that studies have shown that priests who abuse did so for the first time on average at age 39, "which is much older than a trainer, a teacher or a psychologist when they abuse for the first time which would be the age of 25."

"So celibacy becomes a problem if it is not lived out, not integrated into a healthy lifestyle," Zollner said.

The priest acknowledged that clericalism remains a problem among not just the clergy but among laypeople as well.

"I was very much surprised and very much enlightened by comments from laypeople with whom I met over the last few days here, that they said clericalism is not only for clergy. Laypeople also show clericalist attitudes and that is also a problem. When they cling to prestige and they measure their importance in the number of secretaries they have, the type of car they drive, etc."

Zollner also welcomed the greater number of women in leadership roles within the church and that he expected Pope Francis to continue appointing women to important positions in the Holy See.

At the same time, he said, he was surprised to hear a woman during the conference he attended say "that by simply substituting men [with] women … you solve the problem of power issues. That is not the case."