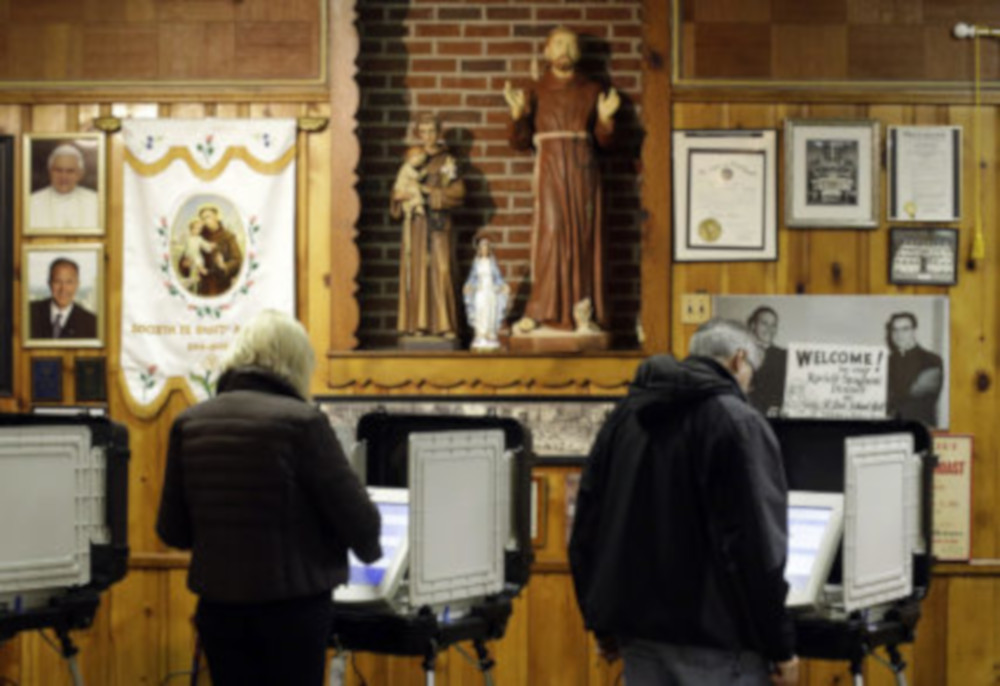 As the 2020 election season heats up, both parties are likely to begin vying for the votes of a crucial group of white, Christian voters.

And no, it’s not white evangelicals.

While white evangelicals have garnered more attention than other faith groups over the past few decades, pollsters and political activists believe white Catholics and mainline Protestants could have an outsized impact in November 2020.

The reason has to do with their location and persuadability. Unlike white evangelicals, whose support for Republican candidates and Trump has become increasingly ironclad, white mainliners and Catholics tend to change their minds about candidates from election to election. Many also live in Rust Belt swing states that Trump won only by narrow margins in 2016.

Trump won about 52 percent of the overall Catholic vote in 2016, according to exit polls aggregated by Pew Research, compared with Hillary Clinton’s 45 percent. Winning among Catholics, who make up the country’s largest religious group, was a major achievement, as it reversed a leftward trend that saw President Obama win their votes in 2008 and 2012.

Trump’s advantage was driven by a surge of support among white Catholics, 60 percent of whom backed him, the highest margin of any candidate in at least two decades. By contrast, he only won 26 percent of Hispanic Catholics, a growing subset of the faith that leans heavily Democratic.

Steven Krueger, president of the group Catholic Democrats, attributes the swing in white Catholic loyalties to Catholics’ unwillingness to be owned completely by either party. "The nature of the Catholic sensibility – based in both faith and reason – is such that does not lend itself to being ideological and rather lends itself to being persuadable," Krueger said in an email.

That quality, he said, should give Democrats hope that they can win back white Catholics in the future.

Persuading white Catholics is especially important in Rust Belt states that helped hand the president his 2016 Electoral College victory — namely, Pennsylvania, Michigan and Wisconsin. According to the 2010 Religious Congregations and Membership Study, all three states are home to counties with some of the highest densities of Catholic congregations in the country, with some boasting 21 or more. 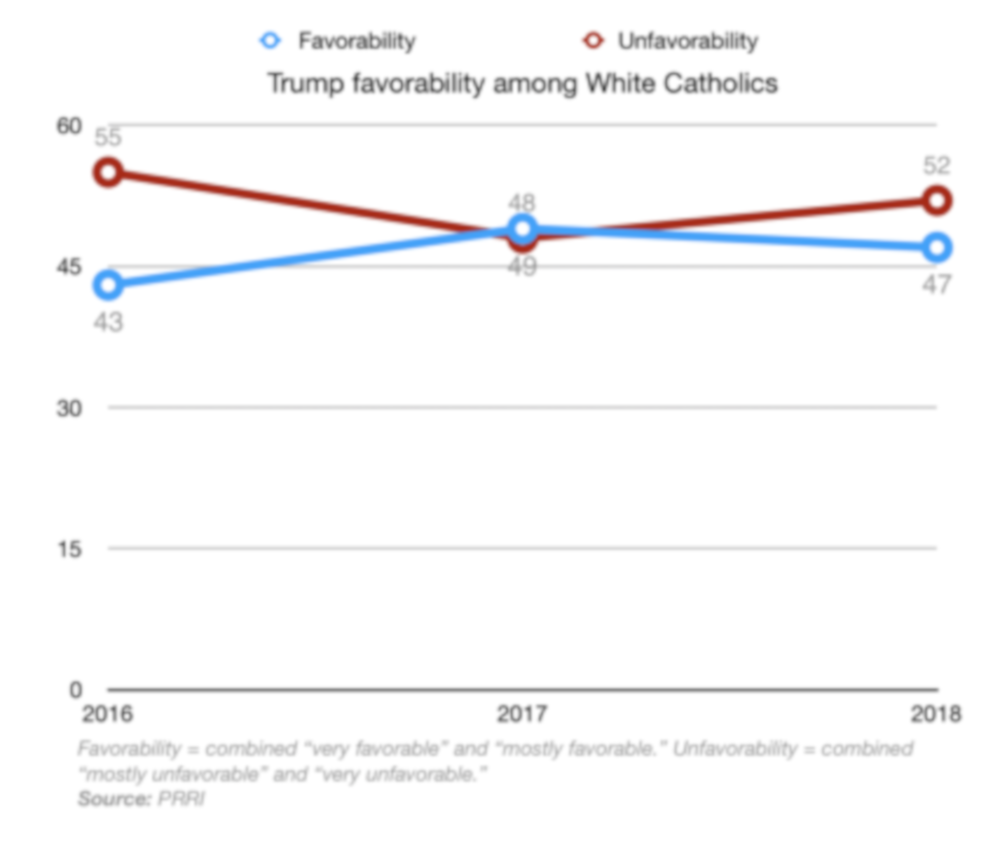 Several of those counties flipped to Trump in 2016after backing Democrats in the past.

Assessing the white mainline Protestant vote is a bit trickier. Elesha Coffman, assistant professor of history at Baylor University, explained that the category includes millions of Christians from denominations such as the United Methodist Church, Episcopal Church and Presbyterian Church (USA), which harbor significant ideological divisions. Coffman pointed to the UMC’s recent debate over same-sex marriage and LGBTQ ordination as one such example.

Such a large and variegated group can be difficult to poll with precision, and most major exit polls do not break out mainline Protestants as a defined bloc.

She did point to some general consistencies, however.

The mainline’s middle- and upper-class Americans tend not to be advocating change, said Coffman, author of "The Christian Century and the Rise of the Protestant Mainline." "The status quo is working pretty well for people who are white, middle class and educated," she noted.

Indeed, PRRI’s polling at the time of Trump’s 2017 inauguration showed that 57 percent of mainline Protestants approved of the president.

Yet as Trump enters the second half of his term, his numbers with both groups seem less stable. A 2018 PRRI poll found that white Catholics who viewed Trump unfavorably had risen to 52 percent, up slightly from 48 percent in 2017. White mainline Protestants are exhibiting even more dramatic shifts: As of September 2018, 48 percent of them approved of Trump’s performance, a drop of 9 percentage points from January 2017.

The back-and-forth among white mainline voters in particular has led some observers to suggest the group may be among partisan America’s last true "swing voters." The reason, Coffman suggested, may be that Trump simultaneously appeases and offends the demographic, letting its members keep more of their money by lowering taxes while at the same time "violating their church’s sense of social justice, and threatening their institutions," she said.

The fluctuations in support could also reflect the sustained criticism of the president from both faith groups' leaders.

Several Catholic bishops, for instance, have condemned the administration’s stance on immigration, and Pope Francis himself has feuded with Trump regarding his proposed border wall.

Meanwhile, the National Council of Churches, representing a number of mainline denominations, has repeatedly voiced criticism of the president and his policies.

Paul Sracic, a political science professor at Youngstown State University, suggested in an email that immigration was an issue that could cause Trump trouble among Catholics and mainliners at the ballot box. 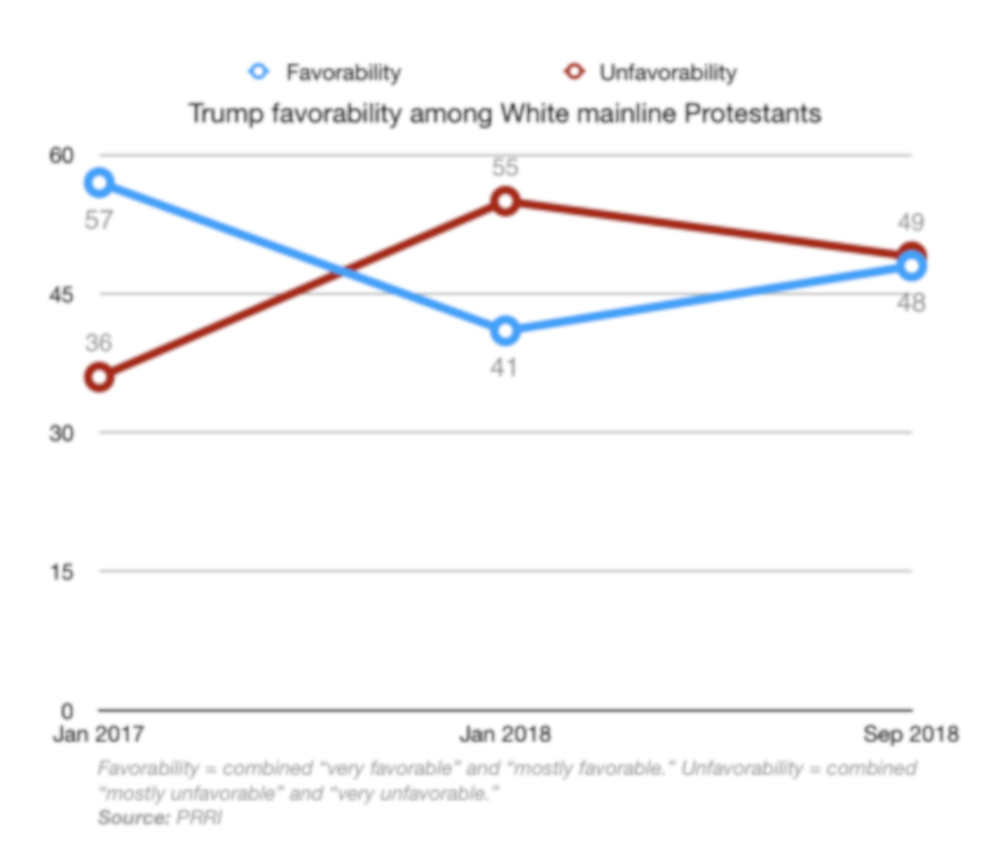 "I think the immigration issue may be a problem for religious voters," he said. "For many voters of faith, religion isn’t just about the 'thou shalt nots' but is also about the 'thou shalls.' And one of the things that you are supposed to do is to 'love your neighbor.'"

Still, Democrats might not celebrate just yet. Sracic pointed out that Trump has defied expectations before.

"It's also important, with Trump, to not conflate approval numbers with voting," Sracic said. "The election of 2020 is going to be a choice between two candidates."

For her part, Coffman cautioned against drawing a straight line between views held by mainline leadership and those of the laity. She noted ideological divides between the pulpit and the pews have been common throughout American history.

Regardless, even a lack of clarity about the two groups’ political leanings is good news for Trump’s Democratic opponents, especially those who can speak to the religious values of voters.

When combined with efforts to bolster support among religious populations that already lean toward Democrats — black Protestants, Jews, Hispanic Catholics and others — the faith angle could pay dividends for Democrats.

But Sracic warned that among working-class religious voters in the Rust Belt, Trump’s "Make America Great Again" campaign slogan "had (a) religious dimension" all its own. His assessment echoes scholars who have noted the influence of Christian nationalism in the 2016 election. 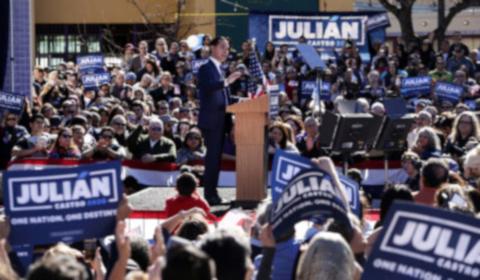 Former San Antonio Mayor and Housing and Urban Development Secretary Julián Castro speaks during an event where he announced his decision to seek the 2020 Democratic presidential nomination, on Jan. 12, 2019, in San Antonio. (AP Photo/Eric Gay)

Trump’s full-throated opposition to abortion, backed up by his nominees to the Supreme Court, is also a central draw for Catholics and even many mainliners.

“Abortion, particularly late-term abortion, has become the latest issue potentially instilling in religious voters the sense that Democrats are the enemy, and driving them to support any available alternative,” Sracic said.

And for all their ease with God talk on the stump, Democratic candidates are still likely to be cast by conservatives as anti-religion in various ways. Michael Gerson, a former speechwriter for George Bush, recently argued that Harris exhibited "anti-Catholic bigotry" when she asked a judicial nominee about his affiliation with the Knights of Columbus, the Catholic fraternal organization.

It's also important to remember that other issues may outweigh religion for many Rust Belt white voters in 2020.

Sracic noted that the closure of General Motors automobile plants in Ohio and elsewhere, along with other economic and social concerns, may be "a real problem for Trump" among white Catholics voters in the region.

Religion, in other words, is only one of many factors influencing voters ahead of the 2020 election — or any election. As Coffman explained, "In 2016, it seemed most Americans were voting their demographic more than their denominational affiliation."