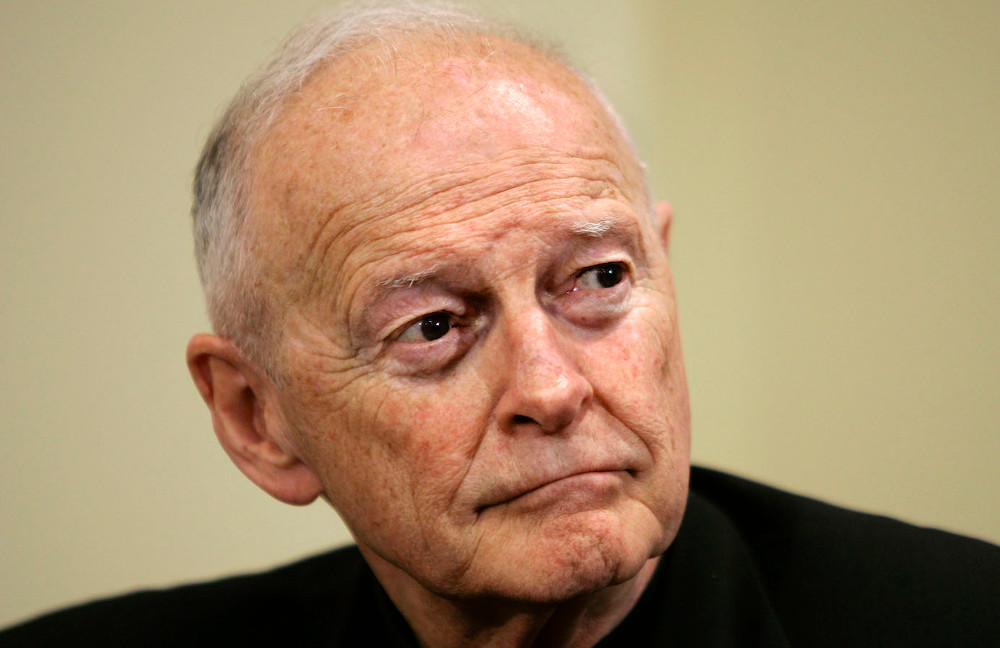 Cardinal Theodore McCarrick listens during a news conference in Washington in this May 16, 2006, file photo. (AP/J. Scott Applewhite)

Recent news stories about financial settlements with adults who had sexual encounters with a bishop show that the issue of sex abuse in the Catholic Church is not limited to the abuse of minors. When Cardinal Theodore McCarrick was suspended from the priesthood after being credibly accused of abusing an altar boy, it was also revealed that financial settlements for his actions had been made earlier with two adults.

The church has adopted a zero tolerance for the sexual abuse of minors, but how should it deal with other sexual activity by priests?

The requirement of celibacy for priests in the Catholic Church is a topic of debate in the church today. Many, myself included, think that priestly celibacy should be optional, as it is in other Christian churches. Pope Francis has signaled that he is open to considering the ordination of married men but wants the request to come from national bishops’ conferences.

But Francis is also very strong is stating that in the meantime, celibacy must be observed. He would not throw out every priest who violated celibacy; individual lapses can be forgiven. But a priest who is incapable of observing celibacy should return to the lay state, Francis wrote before he became pope, especially if there is a child who has a right to a father.

Not everyone agrees with Francis. Some are less forgiving and would expel from the priesthood anyone who even once violates his promise of celibacy. Others argue that celibacy has never been universally observed and bad laws should not be enforced. In some cultures, bishops know that many of their priests do not observe celibacy and simply ignore it as long as it does not become public or as long as the parishioners don’t complain.

It is unknown how widespread are violations of celibacy. There are lots of anecdotes, but little data. I personally believe that most priests, especially in the United States, observe celibacy. But how are we to think about those who do not?

There is universal agreement that those who have sex with minors should be prosecuted as criminals and expelled from the priesthood. But what about violations with adults? Are there other sexual violations that should be treated by the church with zero tolerance?

Rape or other criminal violations should, of course, receive zero tolerance. These violations should be reported to the police and prosecuted under the law. There is no place in the priesthood for such criminals.

But what about other cases of sex with adults? Many Americans don't think sex between consenting adults is an issue. But they and the church need to learn from feminists and the #MeToo movement. They have taught us about the danger of sex between adults who are not in positions of equal power.

There also are many lay people employed by the church. Surely, the church should follow the highest standards in protecting lay employees from sexual harassment from their supervisors, whether priests or lay. Here the church should adopt best practices developed in the secular world.

There are also pastoral relationships that need to be examined since often the people a priest deals with are very vulnerable.

For centuries, the church has recognized this problem with regard to confessors and penitents. As a result, priests are excommunicated if they absolve their sexual partners.

Secular professionals, such as psychologists, recognize these dangers as well. Clients can be very vulnerable and dependent on their therapist. The feelings and emotions that come up in counseling can be exploited. The church can learn from other professions about best practices.

And what about sex with an ordinary parishioner?

The church needs a frank discussion of these issues with input from the laity. Sex between a priest and adult can be more than simply a violation of celibacy. It can also be a violation of professional ethics. With the advice of laity with expertise in these areas, the church needs to adopt best practices and hold itself to the highest standards. The church needs the help of laity not only in developing standards but also in enforcing them. No profession, including the clergy, is good at policing itself.