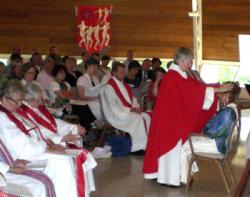 Janice Sevre-Duszynska was ordained a priest Saturday, Aug. 9, in Lexington, Ky., making her the sixth woman to be ordained in the United States this year as part of the Roman Catholic Womenpriests movement.

The movement has ordained 32 priests in the United States over the last two years. Saturday’s event was noteworthy because for the first time, a male Roman Catholic priest in good standing publicly joined the ceremony. Maryknoll Fr. Roy Bourgeois concelebrated at the ceremony and was a homilist. (See related story and read Bourgeois’ homily.)

UPDATE: Maryknoll Fr. Roy Bourgeois, who attended the ordination of Janice Sevre-Duszynska and preached a homily, has been summoned by the superior general of his order. Bourgeois is to meet with his religious superiors in Maryknoll, N.Y., Aug. 18.

The superior general of Maryknoll, an order of overseas missionaries headquartered in New York, told NCR Aug. 13, "We are asking our brother to come home and explain to us what happened."

Marykoll Fr. John Sivalon said that Bourgeois had not informed Maryknoll leadership about his action before the event and all they knew was based on media accounts. "We would like to know what happened,” Sivalon said. “We are asking him to come so that we can have an opportunity to get the facts of the case as they are presented by him."

Sivalon also said that the summons was solely a Maryknoll iniative and that no other ecclesial authorities were involved.

Bourgeois said Aug. 13 that he knew that there would be serious implications for his involvement with Roman Catholic Womenpriets, but said, “I feel that this is something I had to do in conscience in the context of my own faith journey. I feel very much at peace with it.”

About the summons from his religious superiors, he said, “I’ve been with Maryknoll for 42 years, 36 years as a priest. This is family. These are brothers. I am hoping, I’m praying for their support on a critical moral issue that our church is faced with today.

“I am hoping that my community and our leadership will support me and women, that they will walk in solidarity with women who are oppressed.”

NCR is following the story. Check at NCRonline.org for updates.

Sevre-Duszynska, 58, is married. She has said she will serve as an itinerant priest “speaking out for the voiceless and challenging the powers that be to hear the call of nonviolence and cooperation in our world community.”

Marjorie Maguire, a longtime friend of Sevre-Duszynska from Milwaukee, talked with NCR by phone from Lexington after the ordination. About 150 people attended the ordination, which was held in the Unitarian Universalist Church in Lexington.

She said that at the end of the ceremony, Sevre-Duszynska told the congregation that she often thinks of something Dominican Sr. Marge Tuite told her many years ago: “Never stop making the connections between sexism, racism, militarism, nationalism and all forms of violence.”

During the Litany of the Saints, which is part of ordination rite, as Sevre-Duszynska lay prostrate on floor, she held two objects: a wooden cross that she held during protests at SOA Watch demonstrations and an alb made of sackcloth that she wore at demonstrations for women’s ordinations that she staged during the meetings of the U.S. Catholic Bishops conferences.

The Roman Catholic Diocese of Lexington condemned the Roman Catholic Womenpriests movement as “in opposition to the church’s authentic teaching” and warned that “members of the Catholic faithful should not support or participate in Saturday’s event.” Participation in the event, “carries with it very serious penal sanctions in Church Law,” a statement on the diocese’s Web site warned.

The event, the diocese said, “has no connection to Roman Catholic Liturgy or Sacraments and cannot in any way be recognized as a valid reception of Sacred Orders.”

Despite such threats, this has been a busy year for the Womenpriests movement. Three women were ordained in Boston July 20. A woman was ordained in Portland, Oregon June 7 and another in Winona, Minn., May 4. A woman and a man were ordained in Canada May 29. The Roman Catholic Womenpriests claim 26 priests and a dozen deacons in the United States. A California woman, Dana Reynolds, was elected and ordained a bishop for the movement earlier this year. Reynolds presided at the Lexington ordination.

The movement has at least two more ordinations planned for this year, in Santa Barbara, Calif., in September and in Chicago in November.

Vatican formally condemns ordinations
The Vatican's Congregation for the Doctrine of the Faith issued a decree May 30 formally declaring that a woman who attempts to be ordained a Catholic priest and the persons attempting to ordain her are automatically excommunicated.

Dominican Fr. Augustine Di Noia, undersecretary of the congregation, told Catholic News Service May 30 that the decree makes clear that people directly involved in an attempted ordination of a woman excommunicate themselves automatically; it is not a penalty imposed by the local bishop or the universal church.

Since the excommunication is not imposed, there is no possibility of appeal, he said: "The only recourse is repentance.

"The problem is not that all of a sudden there was a tsunami of attempted ordinations of women," Di Noia said, but that the Code of Canon Law and the Code of Canons of the Eastern Churches "never anticipated that such a thing would happen." .

The decree was needed "for the good of the church and to ensure bishops have a common way of responding" when such ceremonies are held in their dioceses, he said.

The media spokeswoman for Womenpriests, Bridget Mary Meehan, says the punishments and excommunications are actually helping the movement.

Such extreme treatment doesn’t make sense to many ordinary Catholics, Meehan told NCR. “They ask, ‘Why would you excommunicate someone who just wants to serve God?’ ” More and more Catholics are accepting the idea of women priests, she said.

“We are building a renewed model of priesthood for a renewed Roman Catholic Church in a community of equals in which all are welcome at the sacred Eucharistic table” said Meehan, ordained two years ago, is a priest for house churches in Sarasota, Florida, and northern Virginia.

“Excommunications are not keeping people from seeking us out,” she said by phone from Lexington. “There is no punishment, there is nothing the institutional church can do to stop this movement,” she said.

Meehan had high praise for Bourgeois. She said that he is the first active male priest to take a public role in a woman’s ordination. She said he, like many other Catholics, are examining their consciences and finding that they must support a more inclusive church.

Sevre-Duszynska events leading up to ordination

Her protests have not been limited to ecclesiastical matters. That same year she was arrested and sentenced to three months in federal prison and fined $500 for a non-violent protest at the School of the Americas at Fort Benning, Ga. She and more than two dozen others trespassed onto fort property in an organized protest calling for the closing of the school.

(Dennis Coday is an NCR staff writer. His e-mail address is dcoday@ncronline.org)