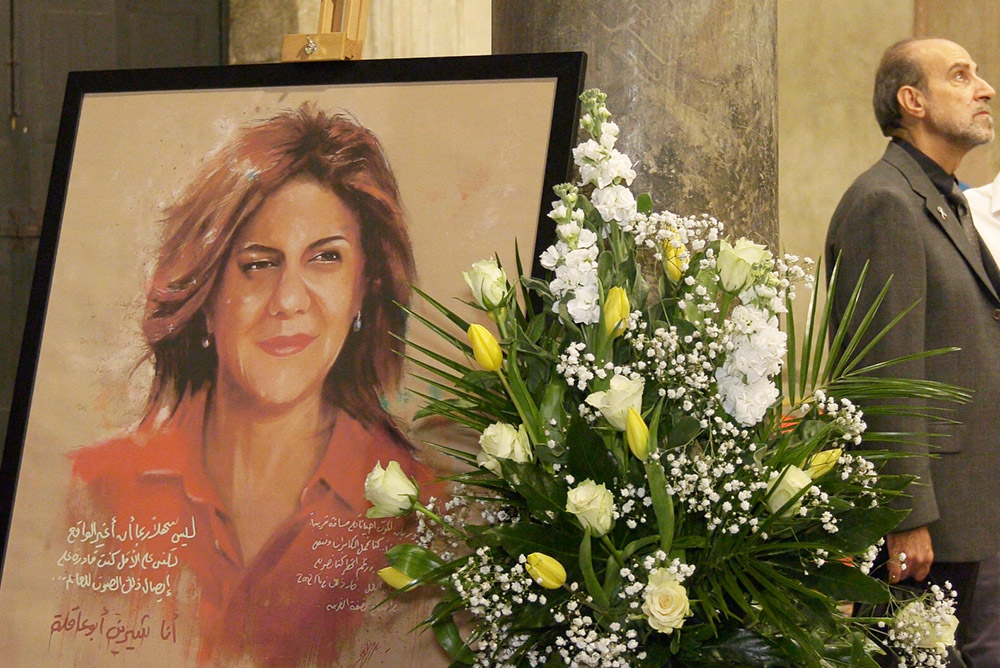 A portrait of Shireen Abu Akleh stands alongside flowers on Oct. 26 at the entrance of the Basilica of Santa Maria in Cosmedin, historically considered the home church for Catholics practicing in the Greek Melkite rite in Rome. (Rome Reports/Justin McLellan)

Six months after Palestinian American journalist Shireen Abu Akleh was killed while covering a May Israeli raid on a refugee camp in the West Bank, her family is calling on Pope Francis to help in advocating for justice for the late Al Jazeera reporter.

Abu Akleh's brother, together with his wife and two daughters, traveled to the Vatican and met with the pope after his Oct. 26 general audience.

"He gave us his blessing, and we demanded that there is justice, that there's accountability," Shireen Abu Akleh's niece, Lina, told NCR about their interaction with the pope. "We continued to send our message of peace."

The family spoke with Francis as part of the receiving line for special guests that briefly greet the pope after his weekly public catechesis.

"We were hoping to see him a bit more, to communicate with him, but unfortunately that didn't work out as we thought it would, as we hoped it would," Lareen Abu Akleh, Shireen's other niece, told NCR, "but we got to see him, he blessed her picture, which is something we were looking forward to, we're very happy as a family that it happened."

In the months following Shireen Abu Akleh's death, Lina Abu Akleh became the face of an international justice campaign for her aunt, and last month was included in Time's list of 100 rising leaders across different fields.

In Rome, she asked that the Vatican use its diplomatic channels to call for further probes into the circumstances around the killing.

"We hope they continue to pressure the U.S. administration, specifically, to carry out an independent investigation, as Shireen was a U.S. citizen," said Lina.

Shireen Abu Akleh was killed on May 11, as she was covering an Israeli Defense Forces (IDF) raid on the Jenin Refugee Camp in the West Bank. Abu Akleh, who was wearing a blue vest with the word "press" written on it, was shot in the back of the head. Although Israeli officials initially denied responsibility for the death, they later concluded there was a "high possibility" she was killed by an Israeli bullet.

The United States has not led an independent investigation into Abu Akleh's killing. But a U.S. government office responsible for coordinating security operations with the Israeli government and the Palestinian Authority was given full access to both Israel's and Palestine's investigations.

It concluded that "gunfire from IDF positions was likely responsible for the death of Shireen Abu Akleh." A U.S. State Department press statement said that the office with access to those investigations "found no reason to believe that this was intentional but rather the result of tragic circumstances."

The Israeli report, released on Sept. 5, said that the "high possibility" was that Abu Akleh was "accidentally hit by IDF gunfire."

Shireen's family believes otherwise. Last month, they submitted an official complaint to the International Criminal Court, calling on prosecutors to investigate what they believe was a targeted killing of a member of the press.

Speaking in front of the court in The Hague, Netherlands, on Sept. 20, Abu Akleh's brother Anton said that his sister "was in full gear, and she was clearly noted as press."

He said, "Any person shooting at the press is intentionally trying to kill them."

In 2021, the International Criminal Court decided to extend its criminal jurisdiction into Gaza and the West Bank, effectively allowing it to investigate complaints originating in Palestine.

Lina Abu Akleh told NCR that third-party states and institutions must " take up the responsibility to protect citizens when their own government cannot," as she said is the case in Palestine.

"It's really important that there are mechanisms in place to hold perpetrators accountable," she said. "We hope that the Vatican supports all our efforts to seek justice and accountability."

For Lina, justice extends accountability not only to the Israeli soldier she says killed her aunt, but also to the Israeli army "for giving the orders" to kill a clearly marked member of the press. 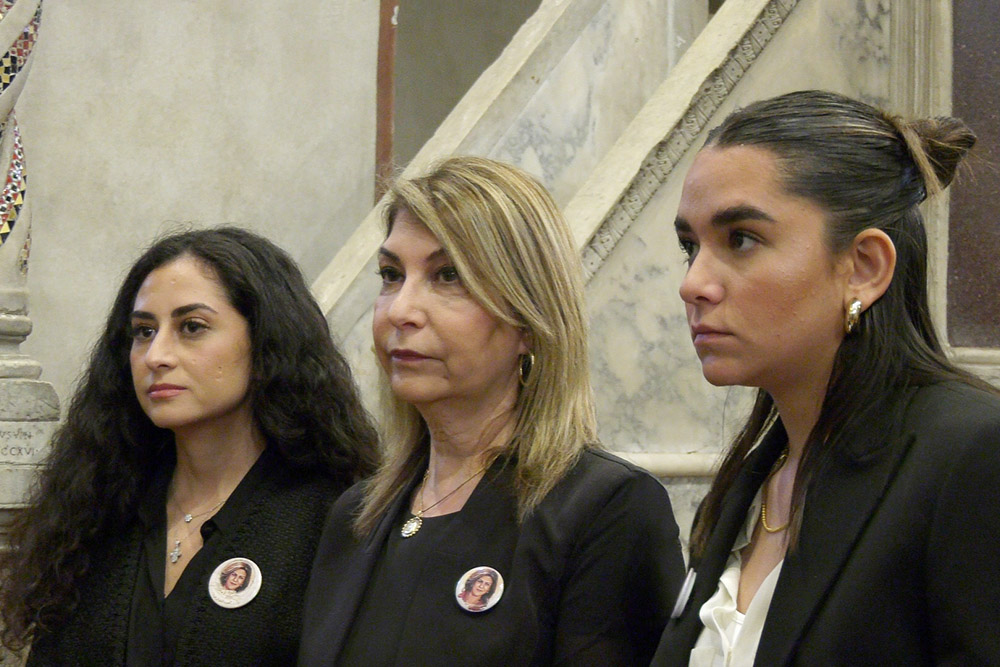 Hours after the meeting with the pope, a memorial Mass was held for Abu Akleh, who was Greek Catholic, at the Basilica of St. Mary in Cosmedin in Rome — historically considered the home for Catholics in Rome who celebrate in the Greek Melkite rite. Archbishop Pierbattista Pizzaballa, Latin patriarch of Jerusalem, was among those who participated in the Mass, and spoke on the legacy she left behind for Palestinians through her work and life.

"Shireen has become an important symbol of the desire of the Palestinian people to live in their homeland with dignity and liberty like any other people," he told the crowd of family members, religious leaders and diplomats. Palestinians are "a people that has been waiting for years that this right be given and recognized," he said.

As the head of the Latin Catholic community in Israel, Palestine, Jordan and Cyprus, Pizzaballa is tasked with striking a balance between the Catholic Church's relationship with the Jewish community in the Middle East and maintaining the Holy See's legal recognition of the state of Palestine. Yet he explained that uncovering the truth behind Abu Akleh's killing is a necessary step for peace in the region.

"We cannot forget the circumstances of [Abu Akleh's] death: circumstances that require that we are united with her family and united in asking for the truth of these circumstances, because the truth is the first step for justice," he said. "We want justice, we want peace, but we cannot have justice and peace without the truth."

Lareen Abu Akleh, who herself is studying journalism in Cyprus, said her aunt's death demands accountability in order to protect other journalists in Palestine and in all parts of the world that seek to represent the truth.

"Justice needs to be served to prove to all journalists that you shouldn't be afraid of doing your job," she told NCR. "You should not be afraid of raising your voice, speaking the truth, showing the world what is actually happening."

With Abu Akleh being a member of the global Catholic community, Lareen believes the Vatican has a special responsibility to seek accountability for her aunt on the international stage.

"Her being a Catholic woman, and a journalist, we need [the Vatican's] help," she said. "We're hoping that the pope will help us take Shireen's voice to the whole world, and to prove to everyone that what happened to Shireen was very sad."

"Her only weapon was her voice."

A version of this story appeared in the Nov 25-Dec 8, 2022 print issue under the headline: Pope asked to push for justice.