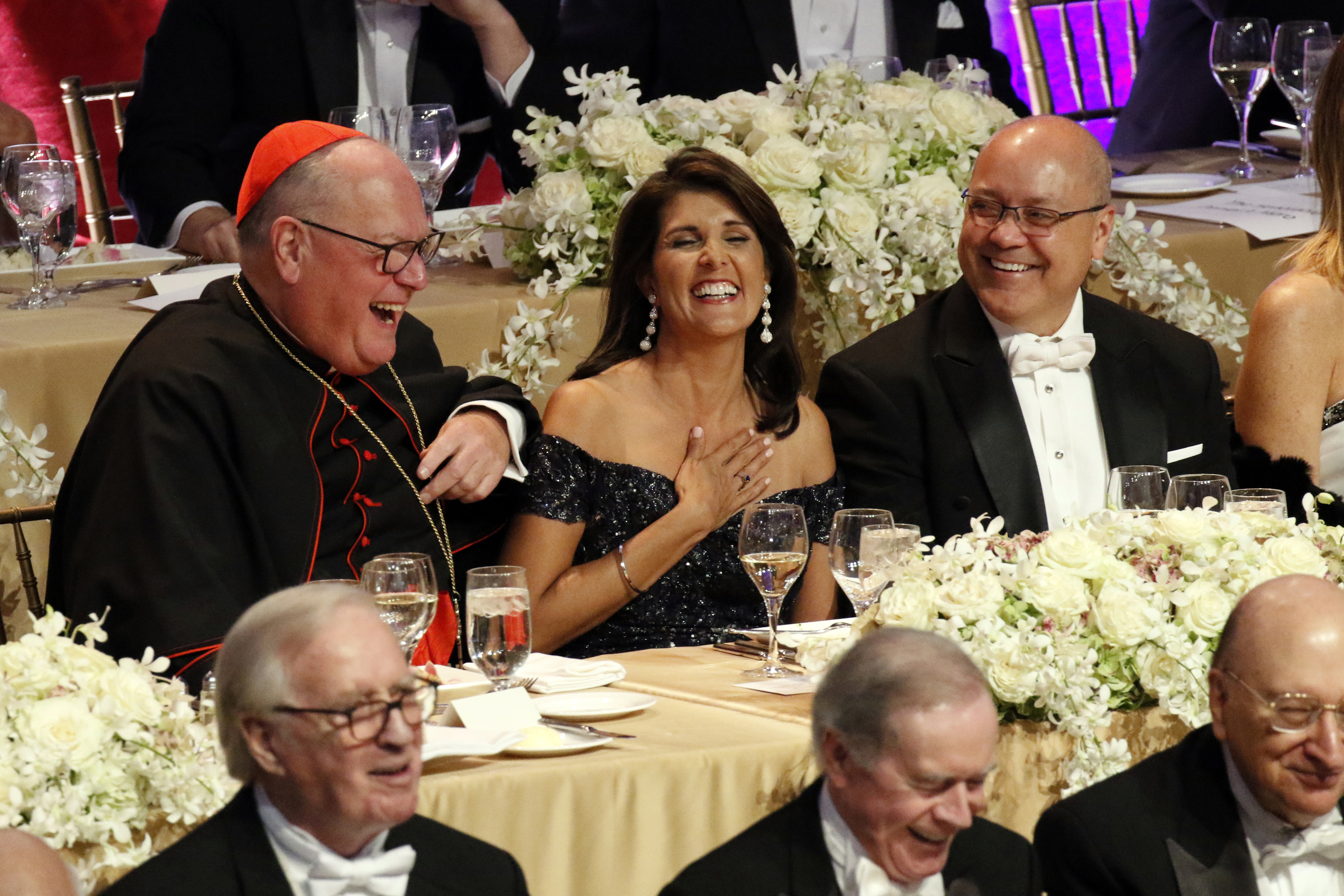 In the current toxic environment where political rivals describe each other as "evil" and "enemies," it is imperative to remember that in America, "our political opponents are not evil, they are just our opponents," according to Ambassador Nikki Haley.

The U.S. ambassador to the United Nations was the keynote speaker at the 73rd annual dinner of the Alfred E. Smith Memorial Foundation Oct. 18 at the New York Hilton.

Haley distinguished the heated rhetoric from the "true evil" she has witnessed in South Sudan, Syria and North Korea since she arrived at the United Nations in 2016.

The Al Smith dinner honors the memory of the former governor of New York, who was the first Catholic nominated by a major political party to run for president of the United States. Proceeds from the $3,000-a-plate event help needy children in the greater New York area. The foundation distributed $3.4 million in grants after last year's dinner.

Comedian Jim Gaffigan was the dinner's master of ceremonies. He poked fun at the presumed wealth of the guests, whom he described as a "distinguished diverse group of rich, super-rich and Michael Bloomberg."

Bloomberg, the billionaire former three-term mayor of New York, also was seated on the dais. Gaffigan said wearing a white bow tie and tails and looking at the sea of diners in formal attire made him feel "like I'm in an ugly episode of Downton Abbey."

He introduced Haley as "the next president of the United States," in a nod to widespread speculation that the Oct. 9 announcement she will leave her U.N. post at the end of the year signifies her intention to run for the presidency. Haley, the Republican former governor of South Carolina, has denied that she will challenge President Donald Trump in 2020.

She made light of the unexpected news of her departure. Haley said she asked Cardinal Timothy Dolan of New York, the event's host, if there was anything she could do to boost attendance at the dinner. "He said, "Why don't you resign as U.S. ambassador?'" she said.

Haley joked that as a member of Trump's Cabinet, "it's a thrill to be out to dinner without being harassed."

She said Trump, who spoke at the 2016 dinner with then-opponent Hillary Clinton, offered her advice about her speech. "He said if I get stuck for laughs, just brag about his accomplishments. It really killed at the U.N."

Haley said she learned a lot during her tenure at the U.N. Despite the serious disagreements and differences among the 193 member nations, "at one point, every single one of them was paying Paul Manafort," she laughed.

Haley said her parents emigrated from India "legally, but I keep them at an undisclosed location, just in case." She said when Trump heard she was an Indian American, "he asked if I was from the same tribe as Elizabeth Warren."

Despite the lighthearted tone of the event, the clergy sex abuse scandal and its fallout hung in the air and were addressed head-on by the speakers. In his invocation, Dolan, the dinner's host, asked God's mercy "on a church we have also blushed at" for its response to the issue.

Haley said sexual abuse is not limited to the Catholic family and the church "recognizes its deep responsibility to address this moral failing."

"It would be tragic to allow the abuse scandal to blind anyone to the amazing good works the Catholic church does every single day," Haley said. "In the last two years, I have been to some very dark places where human suffering is on a level hard for most Americans to imagine."

She described a South American border area where church organizations are the sole providers of food and a refugee camp in central Africa where the church is on the forefront of those seeking change.

"Just about everywhere I've been, I've come across the Catholic Church doing incredible work that lifts up millions of desperate people. It is serving God's will," she said.

Gaffigan said 1928, the year Al Smith ran for president, "was a tough year to be a Catholic," as was 2018. Introducing himself, Gaffigan said, to applause, "Unlike many Catholics in America who were raised Catholic, I am still Catholic and I still go to church every Sunday. Mostly, I'm afraid to tell my wife I don't want to go."

Gaffigan and his wife are both from large Catholic families. "She is one of nine and they do everything together," he said. A movie outing at Christmas included 30 people. "That's not a group, it's a flash mob. People thought we were from a church. To put in in perspective, Jesus only walked around with 12."

The comedian said he and his wife "have recreated the chaos of our childhoods" by raising a young family of five in Manhattan. He said the real reason he accepted Dolan's invitation to emcee the dinner was the optimistic hope that the cardinal would "write some recommendations" for his children.

During the dinner, Lowell C. McAdam, chairman and former chief executive officer of Verizon Communications, received the Happy Warrior Award. The distinction recalls the nickname given to Al Smith by Franklin Roosevelt at the 1924 Democratic Convention. The award recognizes someone who epitomizes Smith's character, grace and leadership by making a positive impact on others.