Sovereign over even the darkest corners 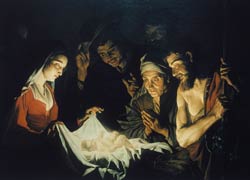 "Adoration of the Shepherds" by Dutch artist Matthias Stomer, circa 1640-45 (Newscom)

He’s retired now, our bishop emeritus, but for over 20 years, Richard Hanifen presided at midnight Mass at the cathedral. As Christmas Eve moved into Christmas Day, Hanifen would stand to greet us.

“In the name of the Father, and of the Son, and of the Holy Spirit,” he said. And then, smiling, “I bring you greetings from your brothers and sisters in the El Paso County jail.”

Before he came to celebrate with us -- our skin itchy from new wool and unclipped tag fasteners, our exhausted, velveteen-clad children asleep in the pew -- Hanifen, bishop of Colorado Springs, Colo., went to the jail to celebrate Mass with the inmates.

We knew this was his practice, but the words still startled. What news, what glad tidings have they to share with us? How am I brother or sister to the meth dealer and the murderer?

Hanifen never attempted to answer those questions. He simply greeted us, and, in the greeting, reminded us that the Father, Son and Holy Spirit are sovereign over the universe, even its darkest corners. He re-membered us to the church outside our walls and our borders, recalling that while the streets of Bethlehem might have lain still, its sleep deep and dreamless, women here were still being raped, store clerks were still being robbed. He simply spoke the truth: Christ is born for all, the predator and the prey, the lion and the lamb. He simply spoke the truth and allowed us to learn it year by year, slowly, as we do.

On Dec. 6, I drove down Nevada Avenue, our main downtown street. Between the YMCA and Acacia Park, there is a median, on which stands a small marker in honor of our sister city, Fujiyoshida, Japan. The marker is designed to resemble a Shinto shrine. A bearded man, dressed in the grimy layers the wandering homeless must wear here even when the morning sun has burned off the night chill, was on his knees before the marker. He held a package of hamburger buns in his hands. Slowly, reverently, he raised the hamburger buns over his head and, then, head bowed low, his arms stretched in front of him, he appeared to offer the bread to the stone.

I thought of Hanifen on Christmas Eve. “I bring you greetings from your brothers and sisters who have no place to lay their heads, who hear voices and see disturbing visions.”

We heard from our Haitian friend, Claude Winddcheley Saturne on Dec. 7. Despite our sponsorship and his letter of acceptance from a local college and his papers all in order, the American Embassy rejected his application for a student visa. He e-mailed us that morning:

I am very sad to inform you that I have been refused the student visa. The interview was excellent though. Now I can imagine how much they don’t trust haitains. The prabably think that we (Haitians) won’t come back because of the worst condition of life here caused by the earthquake. I am feeling very hurt. And now once again I am wondering what I am going to do, here with no hope, no school, no job, no house etc. My heart is broken!

On Dec. 1, we learned that my husband’s cousin had been indicted for murder and arrested. She will likely keep Christmas in jail.

My husband grew up with this cousin and her siblings. They lived in the same town, were near the same ages as my husband and his five brothers. They ate together and played in the backyard together. Their grandma taught them all how to play spoons and pick apples and make applesauce.

We attended her wedding. We mourned with her at Grandma’s funeral and when her own mother died.

The last time we saw my husband’s cousin, she was the marketing director of the nursing home where my father-in-law, her uncle, spent his last weeks. My husband’s brother brought my father-in-law to the locked Alzheimer’s unit. He remembers their cousin waiting for them at the front door of the ward. He remembers thinking that he could not have done this hard thing without her.

She visited my father-in-law daily. When he picked a napkin off his tray and demanded to know “why this invoice hasn’t been paid,” she apologized and told him she would have someone in accounting look into it right away.

We do not know what happened, to her or by her hand. At first, until we saw the mug shot, we refused to believe this woman was our cousin, and not some unfortunate with the same name. Because we cannot imagine that someone we know and love wears an orange jumpsuit and zip cuffs and sees her family from behind scratched Plexiglas. Unlike the faceless people Hanifen insisted on bringing into our worship, this is someone we claim. Someone we have no trouble calling “sister” is in jail.

I will think of Hanifen this Christmas Eve. And though no one will offer us “greetings from our brothers and sisters in the El Paso County jail,” I will hear them.

I will be still, and listen with the ear of my heart, listen for the glad tidings told, from cathedral, from street, from clinic, from cell.

[Melissa Nussbaum is an NCR columnist who lives in Colorado Springs.]

Sovereign over even the darkest corners