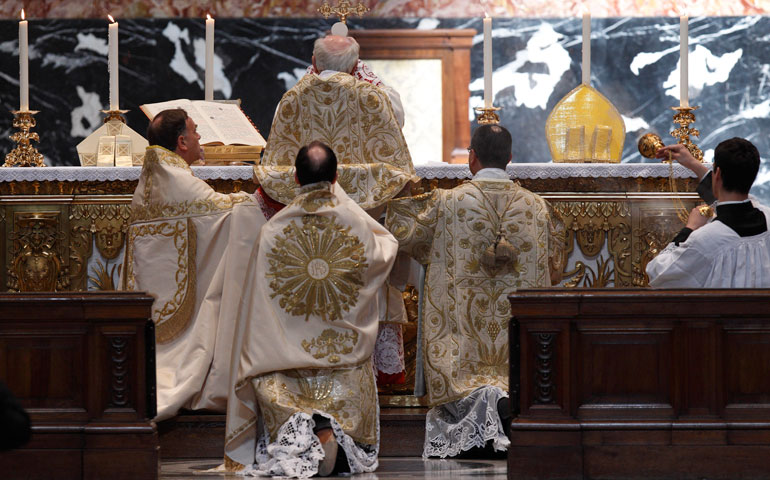 Cardinal Walter Brandmuller elevates the Eucharist during a Tridentine-rite Mass at the Altar of the Chair in St. Peter’s Basilica at the Vatican May 15, 2011. (CNS/Paul Haring)

It was curiosity and a sense of irony that moved me to open the Oct. 1 issue of our diocesan newspaper. On the cover was the headline "Moving Forward in Faith" next to a picture of our former bishop vested as would be a prelate from more than 50 years ago. This was a photo from a liturgy in the "extraordinary form" (pre-Vatican II 1962 Latin Mass), welcoming a group of very traditional Carmelite nuns to the diocese.

Lately, there seems to be an increasing interest in this "extraordinary form" in our diocesan paper and among some of our clergy. In the past my attitude has been "so what." If people are into antiquarianism, let them. Some people like to spend weekends reenacting the Civil War. They dress in period costume. They stage mock battles of Union and Confederate soldiers. It's a harmless hobby. I just figured that the people attached to this "extraordinary form" were the liturgical version of societies for anachronistic re-enactment.

However, I have come to change my opinion. Those attached to the extraordinary form are not like Civil War re-enactment societies. At least those people know they are play-acting about a time that can never return. The people attached to the extraordinary form are seriously trying to enact a particular worldview and understanding of church. And it is an understanding that we left behind at the Second Vatican Council. It is a worldview that is incompatible with the council.

Liturgy is not about taste or aesthetics. It is how the church defines itself. Those who rejected Vatican II and its liturgy were the first to understand the connection between liturgy and our self-understanding as church.

Pope Paul VI also understood this. The rejection of the Vatican II liturgy is a rejection of its ecclesiology and theology. In his newly published book True Reform: Liturgy and Ecclesiology in Sacrosanctum Concilium, Massimo Faggioli narrates Paul's response when his philosopher friend Jean Guitton asked why not concede the 1962 missal to breakaway Archbishop Marcel Lefebvre and his followers. Paul responded:

Paul knew that permitting the old form would be not only divisive but would call the whole council into doubt, and that would be a sin against the Holy Spirit. Now we are experiencing the unfortunate fruit of the recent permission to celebrate the extraordinary form.

The definition of who we are as church comes alive in the liturgy. Vatican II described the church as a priestly people called on a mission. This priesthood is rooted in our baptism. Once Pope John Paul II was asked what was the most important day in his life. He replied, "The day I was baptized."

Baptism is our sharing in Christ's victory over death. We are incorporated into the paschal mystery of the risen Christ and now share in the life of God. What higher calling can there be than this? Marriage, religious or single life and ordained ministry are but specific ways in which one is called to live out his/her baptismal vocation. This is why St. Augustine would tell his people, "With you I am baptized; for you I am ordained." The council tells us that baptism calls everyone to holiness.

The council's vision of a priestly people on mission necessitated a liturgy that could prepare disciples ready to take up their responsibilities. The council looked to the church's distant past to recover ritual elements that were instrumental in preparing the baptized to take active responsibility for Christ's priestly, prophetic and royal mission.

In her article "Summorum Pontificum and the Unmaking of the Lay Church" (Worship, July 2012), scholar Georgia Masters Keightley identifies those elements recovered by the council from the ancient church. These express the active exercise of the priestly people of God: the prayer of the faithful, the offertory procession and the kiss of peace. These were visible signs that expressed the church's priesthood. These signs incarnate for the priesthood of all believers the task to proclaim the Gospel and to make intercession for the world and all people.

Over time, these elements were lost or obscured. By the time we get to the Council of Trent (1545-63), new prayers and rites had replaced the ancient rites. Keightley writes:

These made no room for the laity's intercessions for the world and its people. Gone was any visible sign of the sacrificial offering of self that takes form in those daily efforts to welcome the stranger, care for the poor, and steward the earth's resources. Neither was there allowance for that sincere expression of the fellowship and communion the Church claims to celebrate and witness. With their disappearance, an important dimension of the liturgy also receded, i.e., the primitive Church's appreciation of the Eucharist as a sacrificium laudis (sacrifice of praise).

The liturgy that came out of the Middle Ages and Trent placed a different emphasis on the eucharistic liturgy. Focus was not on preparing all the baptized for mission but on the power of the ordained to transform bread and wine. The idea of the "unbloody reenactment of the sacrifice of the cross" pushed "thanksgiving for creation and consecrating the world" to the margins of eucharistic theology. The power of the clergy to make Christ present in Eucharist eclipsed the Eucharist's power to transform the baptized -- equipped to make Christ a real presence in the world through their everyday lives. Keightley again:

This not only introduced a deep divide between creation and redemption; it gave rise to a lay spirituality focused narrowly on the individual's future salvation to the neglect of one's priestly ecclesial duties for the here and now renewal of creation.

The 1570 missal (the basis of the 1962 missal) was, and continues to be, a liturgy in which the baptized -- once subjects of the liturgy and co-celebrants of the eucharistic sacrifice -- were and are reduced to mere spectators. They are there to watch the priest say "his" Mass. The emphasis is hierarchical and legalistic (who has the power and how are they lawfully exercising that power). Rather than the risen Christ working through the whole people of God (lay and ordained), we have a powerful clergy ministering to a passive people. Instead of church as sacrament, we have church as a juridical hierarchy.

The attempt to resurrect and popularize the 1962 pre-Vatican II Mass has serious ramifications. Will we be a church that looks narrowly inward -- where God is found only in piety and private devotion, or will we be a church as Vatican II defined it -- a Spirit-filled people on fire with an urgent sense of mission? We are at a crossroads. The extraordinary form is incapable of activating us as the priestly people of God -- the vision of Vatican II. Which path will we follow?

Sts. Teresa of Avila and John of the Cross were great reformers of the Catholic Counter Reformation. As those at Vatican II, they tried to reform their community by returning to the sources and restoring religious practice (discalced) that had become obscured over time. They also had to struggle with those who fought the reforms they were initiating. We need their intercession to persevere in the aggiornamento (updating) that Pope John XXIII inaugurated by calling the council together.

The feisty, joyful perseverance of St. Teresa of Avila is reflected in one of my favorite quotes of hers: "From sour-faced saints and silly devotions, good Lord, preserve us!"

A version of this story appeared in the Dec 7-20, 2012 print issue under the headline: Forward and backward in faith.