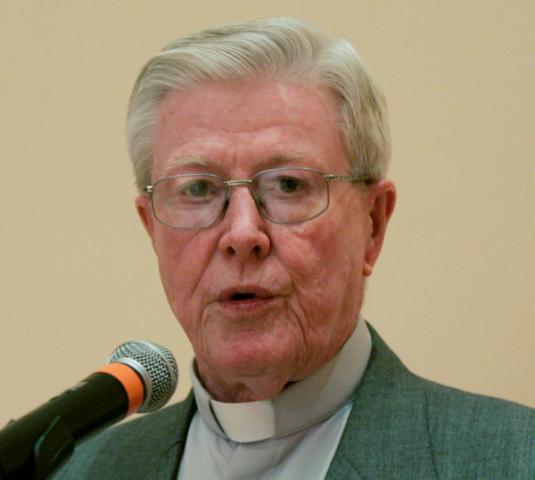 Retired Australian Auxiliary Bishop Geoffrey Robinson of Sydney speaks to a group of Voice of the Faithful at the Unitarian Universalist Congregation in Manhasset, N.Y., in 2008. (CNS photo/Vic DeLucia)

BALTIMORE -- At the Seventh National Symposium on Catholicism and Homosexuality, retired Australian Bishop Geoffrey Robinson called Friday for "a new study of everything to do with sexuality" -- a kind of study that he predicted "would have a profound influence on church teaching concerning all sexual relationships, both heterosexual and homosexual."

"If [church] teaching on homosexual acts is ever to change, the basic teaching governing all sexual acts must change," he said.

Robinson, a priest since 1960 and auxiliary bishop of Sydney from 1984 until his retirement for health reasons in 2004, told the Baltimore symposium, sponsored by New Ways Ministry, that "because sex is so vital a way of expressing love, sex is always serious."

That view, espoused by the church, stands in contrast to the general perception of modern society, which "appears to be saying more and more that sex is not in itself serious," he said.

For the church to deal with sex seriously, however, does not in itself mean that the church must continue to accept uncritically its traditional understandings of sexual morality, he said.

Robinson was a featured speaker at the March 15-17 symposium, which drew about 400 gay, lesbian, bisexual, transgender and questioning Catholics and church personnel ministering to them. The gathering's first day was devoted to a spiritual retreat guided by the bishop.

At the symposium's lunch Friday, Maryland Gov. Martin O'Malley addressed the group on a pending state law, which he had signed just days earlier, legalizing same-sex marriage in the state.

Opponents of the new law have launched a campaign for a popular referendum in November to revoke it, but several recent polls have indicated that a slight but growing majority of the state's voting population favors legalization of same-sex marriages.

In his talk later that afternoon -- available along with other writings on his website -- Robinson did not address the growing U.S. question of whether faithful same-sex unions should be blessed with the title and all legal rights of "marriage." But he argued that the church's moral appraisal of such unions would change dramatically if it were to reevaluate its traditional approach to all human sexual activity.

He said while the church's emphasis on the profound significance of sex is correct, its natural law approach to sexual morality and its interpretation of ancient scriptural passages on homosexual and other sexual activity are in need of correction.

Robinson -- whose activities before he became a bishop included teaching canon law and heading the Canon Law Society of Australia and New Zealand -- said his own full realization of how serious sex was came when the Australian bishops called on him to head an investigation into the causes of clerical sexual abuse of minors in his country and how to resolve those problems.

"Paradoxically, it was the effects of the sexual abuse of minors more than anything else that convinced me that sex is serious," he said.

He began his talk with three basic premises:

"If the starting point [as in current church teaching] is that every single sexual act must be both unitive and procreative, there is no possibility of approval of homosexual acts," Robinson said.

He proceeded, however, to question that natural law argument, especially as laid out by recent popes, and to suggest that a more nuanced reading of divine commandments in scripture and of Jesus' teaching would lead to a different set of moral norms -- starting with a change in church teaching that every sexual act or thought that falls outside a loving conjugal act open to procreation is a mortal sin because it is a direct offense against God himself in his divine plan for human sexuality.

"For centuries the church has taught that every sexual sin is a mortal sin. The teaching may not be proclaimed as loudly today as much as before, but it was proclaimed by many popes, it has never been retracted and it has affected countless people," Robinson said.

"The teaching fostered a belief in an incredibly angry God," he added, "for this God would condemn a person to an eternity in hell for a single unrepented moment of deliberate pleasure arising from sexual desire. I simply do not believe in such a God. Indeed, I positively reject such a God."

Robinson has been a source of controversy in the church since at least 2002, when he called for Pope John Paul II to commission a church-wide study of clerical sexual abuse of minors in the church.

His 2007 book, Confronting Power and Sex in the Catholic Church: Reclaiming the Spirit of Jesus, drew ire from his fellow bishops in Australia, who objected to his 2008 lecture tour in the United States to speak on some of the issues addressed in his book.

His full text at the New Ways Ministry symposium, as well as other writings and references to controversies Robinson has engaged in in his efforts to change the way the church's approach to issues of sexual morality -- far too detailed to be covered in a single news article -- can be found on his website.

A look at marriage equality from a historical perspective

Thirtieth Sunday in Ordinary Time: A call in two dimensions