Bringing God to the rhythms of our days 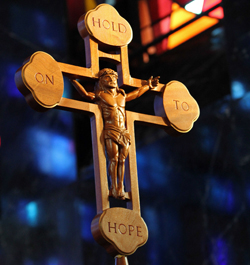 As readers of my “Distinctly Catholic” blog on the NCR website know, I came down with the flu at the beginning of the year. Seven days of it. Yuck.

Because I could not get out of bed, I missed Mass twice. And, consequently, for the weeks that followed, I never knew quite which day it was. I felt like a cat that falls and doesn’t land on all fours, disoriented and flustered. The whole week wasn’t right because it had not started the way it was supposed to.

It is so easy to take Sunday Mass for granted. We all lead busy lives. We look at the church bulletin and see that our parish church has four or five Masses every weekend. Protestants don’t do that. Why all this effort to make Mass available to people? Because, without the Mass, nothing else seems meaningful. Without the Eucharist, we are a hungry people.

It has been a long time since I heard a sermon about the reason we Catholics have a liturgical year. But, just as there are seasons in nature, there are liturgical seasons that correspond not only to our commemoration of salvation history, but that correspond to the different needs of the spiritual soul. We have Advent to help us focus on that part of our soul that is still yearning for the fulfillment of the promises of the Messiah. We have Lent to consider our need for salvation. We have Christmas and Easter to celebrate the two great dogmas of our faith, the Incarnation and the passion and resurrection of the Lord. And we have ordinary time to focus on the narratives in the Synoptic Gospels, the stories of Jesus when he walked on the earth.

In my family, we have certain traditions that reflect the liturgical season. We may buy our Christmas tree a few days in advance, but we never decorate it until Christmas Eve. Why cut into Advent? On Palm Sunday, I always grab a big bunch of palms and place them in a vase next to a large and beautiful crucifix that I have in my living room. On Easter, we drape that crucifix with white and gold ribbons and they stay there until Pentecost. These little habits help attune the mind to the large and sacred mysteries that mark the liturgical year.

In Boston, Cardinal Séan O’Malley has a special Mass on New Year’s Eve at midnight so that he and those who wish to participate can begin the new year in prayer. This year, the Mass was held at St. Leonard Parish in Boston’s North End and it was very well-attended. “We had the holy hour directed by Fr. Matt Williams, with rosary and benediction, followed by confessions, and then followed by the Eucharist,” O’Malley wrote on his blog. “The Boston fireworks were going off as I finished my homily; it was a dramatic way to finish a homily -- with fireworks!” I like the fact that the faithful in Boston are invited to sacralize the entire year by beginning it in prayer.

Space, as well as time, can be sacralized. Here in Washington, the Episcopal cathedral is a very beautiful building, but I never quite feel like I am in a church. Maybe it is the large statue of George Washington at the entrance, or the flags of all the 50 states that line the nave. I mentioned this once to a fine priest I know and he said, “Oh, it’s not the flags. There is no Blessed Sacrament. A church never feels like a church to a Catholic unless it has the Blessed Sacrament.”

We Catholics put crosses everywhere. We put a cross over the door to our homes. We put them over our beds. We put a rosary into the hands of our dead and on the headstones where they are buried. We put a cross on the top of the steeples of our churches. In these and other ways, we mark out a space and say it belongs to God.

It is a commonplace to say that Catholics’ sacramental system gives them a different perspective on the relationship between the divine and the mundane. But there is nothing commonplace about this phenomenon. It speaks profoundly to our deep belief that God is present in the world, that “the Word was made flesh and dwelt among us” and that the Word still dwells among us. There are times when it is useful to distinguish between the sacred and the profane, but we Catholics know that such distinguishing is a half-truth. “All was created in him; all was created for him.” All.

Many churchmen, including Pope Benedict XVI, have warned about the secularization of the culture. I worry about that, too. But instead of the “culture warrior” stance that some have adopted, I think we Catholics should spend less time worrying about those who seek to eliminate God from the public square and more time trying to bless our time, to bring God to our sense of the seasons and the rhythms of our days. If secularization is acting as if God does not exist, what better way to combat it than to act as if he does exist. I just wish it hadn’t taken a bout of the flu to remind me of it. And you can bet I will be sure to get my throat blessed on the Feast of St. Blase!

[Michael Sean Winters writes about religion and politics on his Distinctly Catholic blog on the NCR website, at NCRonline.org/blogs/distinctly-catholic.]

Spirituality | Bringing God to the rhythms of our days

Remain in my love

Fourth Sunday in Ordinary Time: Prophets for the world