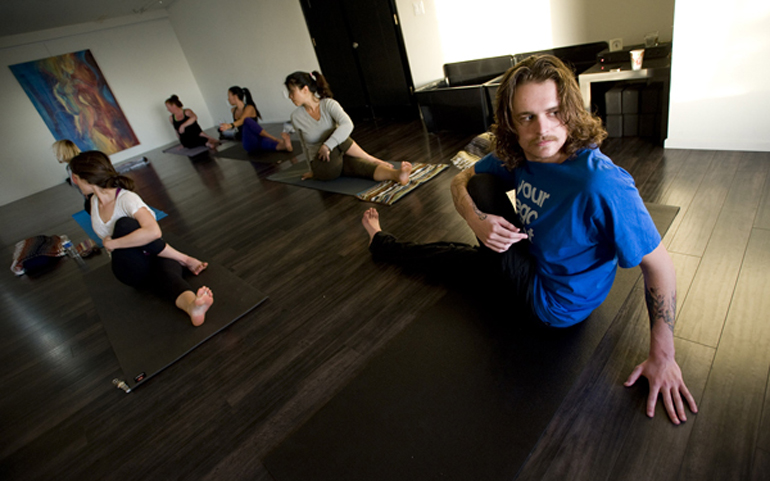 Cole Jacobs, who recently turned 20, is among one of the youngest yoga instructors in California. He teaches a Vinyasa yoga class. (RNS/Orange County Register/H. Lorren Au Jr.)

Class began at dusk in a dimly lit studio facing Pacific Coast Highway as the yoga teacher appeared, adjusting the shawl draped around his shoulders, and took his seat on a quilted meditation pillow.

Because the sun was setting behind him, the teacher appeared in silhouette. I could only hear his voice as he guided us through the 90-minute Kundalini yoga class -- a series of meditations, chanting, vigorous breathing exercises and asanas (or postures).

"I want you to know that this is a safe place," the teacher, Cole "Raahi" Jacobs, told us midway through class. "You can feel whatever you need to feel. You are safe here."

At the beginning of the year, I embarked on a two-month sabbatical to recover from a rough 2012. I needed to recharge and resolved to rest, spend time with the people I love most, and find some kind of physical practice that would be restorative.

Working out is not something that comes naturally to me -- in fact, I hate it -- but I have practiced yoga sporadically since college and thought yoga might be my wheelhouse.

I had not-so-great experiences in the crowded commercial studios where the main goal of the ancient Indian practice seemed to be attaining the perfect "yoga butt" rather than anything approximating enlightenment.

So I prayed, asking God to send me a teacher and a place to practice that would be right for me.

I had heard a new yoga studio had opened in town called Ritual Yoga Arts, where a more traditional style of yoga is taught and practiced with an eye toward spiritual, holistic health rather than tight buns.

Ritual's Thursday night Kundalini yoga -- a discipline often called the "yoga of awareness" -- seemed like a good fit because of its emphasis on cultivating compassion and consciousness in relationship with God and others. It's a physically demanding practice, but in a much different way than, say, "power yoga" might be.

When class was over, I felt sweaty, tired and fantastic. It was just what I needed. I'd found my oasis.

A few days later, standing in the hallway after class talking about Jacobs, one of the other students said something that absolutely shocked me: "Can you believe he's only 19?"

No way, I thought. Jacobs has a baby face, but with his depth of knowledge and grounded, laid-back manner, I figured him to be in his early 30s -- not young enough to be my son.

Sure enough, Jacobs, who was born in 1993, is something of a yoga prodigy. In fact, he is believed to be one of the youngest yoga instructors teaching in California and may be the youngest Kundalini teacher in the nation.

Jacobs took his first yoga class -- a workshop called "Yoga for Stiff Guys," he recalled -- after he blew out his ACL when he was 16.

By the time he graduated from high school in 2011, he was teaching 22 yoga classes a week. He completed formal teacher training and went on to teach at various power yoga studios until last fall, when he decided he wanted to go to the source to expand his practice and understanding of yoga as an instructor.

Jacobs left for the Anand Prakash Ashram in the foothills of the Himalayas in Rishikesh, India. There, he completed 500 hours of teacher training with Yogrishi Vishvketu, the Indian-born guru and founder (with his Canadian wife, Chetna Panwar) of the international World Conscious Yoga Family.

By the time Jacobs returned from India last December, he'd decided he wanted to teach at a studio where the yoga was more traditional and spiritually authentic. He began teaching at Ritual a few weeks later.

"If someone is teaching a power class and they're not talking about anything historical or spiritual, that's not yoga, that's an aerobics class. And there's nothing wrong with that. We just need to be honest about what we're doing," Jacobs said.

At the ashram, Jacobs was the youngest student in his training class of 30 women and four men. He was also one of the youngest men Vishvketu had ever trained.

"He was very disciplined and concentrated and very hardworking, especially for his age," the guru told me by phone. "He is just a beautiful person, and he has a gift. It's a natural talent. In the West, he is unusual."

Even more unusual, Vishvketu says, was how quickly and deeply Jacobs took to the highly spiritualized, traditional form of Kundalini yoga. "Classical Kundalini isn't just something that you get one class in and then you teach," he said.

Jacobs, whom the guru bestowed with the spiritual name "Raahi" (a Hindi word that means "the one you meet along the way to enlightenment"), "was connected in a special way, and it was very powerful," Vishvketu said. "He is a wonderful soul, very inspiring."

Indeed he is. Jacobs is among those rare few who have been blessed with a true pastoral gift. He has an uncanny ability to see and meet the needs of his students (whom he calls "yoga kin"). He's also one of the most honest people of any age I've ever met.

"I feel things deeply, whatever it is, whether it's someone else's pain," he says. "I'm predictably empathetic. And yet sometimes I can put a big wall up and be quite cold. I have a very soft heart -- but I refer to myself as like a peanut-butter-and-jelly sandwich with burnt toast."

Raised as a Roman Catholic until his early teens, Jacobs says he still "believes in Christ" but now answers "yoga practitioner" when asked how he'd define himself spiritually.

"I'm a rishi, a 'seeker,' " he says. "I have my service -- I have what I do during the day for other people -- and that's really my main focus in life, to do that service, to carry out that service. I believe that what I do is what I should be doing. That's my connection to God. That's my offering to the planet, to the cosmos."

There is a maxim often attributed to the Buddha that says, "When the student is ready, the teacher will appear."

And so I offer a deep bow and prayer of gratitude for having met mine.

[Cathleen Falsani is the faith & values columnist for the Orange County Register.]