Death of innocents a call to renewal this Easter 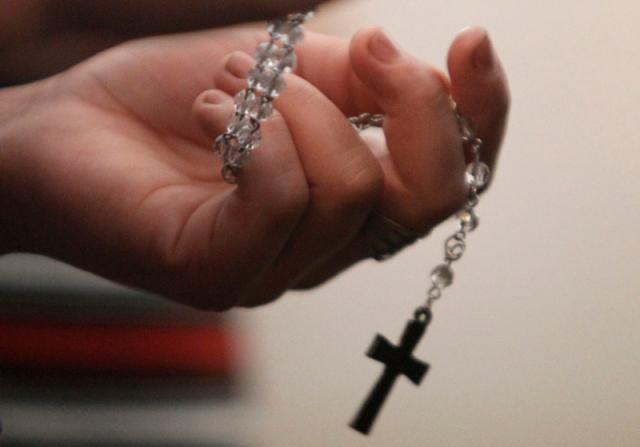 A worshipper holds a rosary as she prays during Easter Mass at Sacred Heart Catholic Church in Baghdad, Iraq, in 2011. (CNS/Reuters/Saad Shalash)

"I believe, Lord. Help my unbelief."

As this Lenten season draws to a close, I seem suffocated with the death of innocents, from Afghanistan to Florida. It wounds my spirit, but it can no longer shock me, this pouring out of the blood of the blameless, wherever we find violence valorized and guns made holy.

In the background, we hear the murmurs concerning a poor man who was completely fractured by too much exposure to the horrors of war, finally turning his confusion, rage and self-loathing onto the sleeping citizens of two villages in an occupied land. Closer still, we hear the guilty plea of Deryl Dedmon, a bewildered and disconnected near-adult in Mississippi who drove his truck over and killed a black man. He proclaimed, "I was young and dumb, ignorant and full of hatred" as he confronted the dark place inside him that urged him to find a black body he could destroy. And in our face, day after day, night after night, we see the pretty young boy, holding the baby up and smiling in the camera. We see the trembling mother and barely focused father asking, "What did our son do? What did he do?"

Could Abraham tell them? What went through his mind as he pushed himself and his beloved Isaac up Mount Moriah, in order to satisfy the claim of the still-alien God who demanded every ounce of his faith? A dear friend of mine, Fr. Ferd Cheri, said to me the other night, "Ask them, 'Is there no ram in the bush?' " Indeed. In that story of delayed and distracted sacrifice on the mountain, the treasured child is spared and the ram caught in the thicket becomes the sacrificial portion. But in this mad world, the ram -- the scapegoat even (Leviticus 16:10) -- has been transformed: the children of Afghanistan, Haiti, Sudan, Congo, Guatemala, Somalia; rural Illinois; Sanford, Fla.; the west side of Chicago; Pine Ridge.

The scriptural history of us as people of faith, as children of Abraham and Sarah and Hagar, is filled with the ritual slaughter of the innocent, beginning with Abel, through Ishmael, to the near-death of Joseph; on to the rapes of Dinah and Tamar; moving to Herod's edict that all the children of Judea, 2 years of age or younger, be slain because he was insecure, afraid and willing to defy the very grace of God. How could we wonder at today's events as they unfold? With every miracle he accomplished, Jesus was more maligned by the people who feared the occupying army more than they trusted a man who fed multitudes, healed the infirm, cast out demons and raised the dead. Every sign of Jesus' power was met with distrust, fury and desperation. He took our sins upon us; we beheld him and we were ashamed. But killing him did not kill our shame.

Trayvon Martin, the black teenager shot and killed in a quiet neighborhood in Florida, and James Craig Anderson, the man run over in Mississippi, and all the other non-newsworthy, non-primetime victims, soon to be forgotten and immediately misunderstood, are the latest in the history of the demonized black body sacrificed to ease the nightmares of some. Forty-nine states have "concealed carry" laws. Twenty-six states have "stand your ground" laws. In every region of this country, children can get discounts when they visit gun and knife shows. The most popular film of the spring is a story -- for young adults, we are told -- that depicts a society where children are broadcast in a contest of mortal dimensions where only one can be victorious -- the one who slays the rest. This no longer seems fantastical. Perhaps it never did, to some. Contrary to the claims of some that this is a Christian nation, "the alien and the stranger, the widow and the orphan" among us are not held in our precious care. They, too, are demonized, by law and by custom. We throw stones at the hungry of spirit, mind and body who would ask for even the crumbs from the table of our wealth.

And yet Easter is as inevitable as air.

The hundreds of thousands of our sisters and brothers who crowded into the plazas, strode into churches wearing the outfit that identified them as bonded to Trayvon Martin, who signed petitions demanding justice, have been awakened to something we can only hope will be transformative. The young have seen themselves in the face and circumstance of the slaughtered boy and will not be dissuaded by all attempts to blemish his death with nuanced accusations of his frail humanity. The other sound we hear is the cry, not of the poor, but of the finally "weary enough": This must not continue. We are called to remove the stones blocking the caves of our hearts, hearing the call of God to come forth from the graves of our small, dangerously fierce fears.

Maybe this Easter season, if we are attentive to the truth we are being taught by the death of the man-child, Trayvon, we can feel the breath of the Spirit hovering over our darkness and our void. Maybe, just maybe, the old folks who gave us the old song were right: "Ain't no grave can hold my body down."

No one dies as long as we call them to us.

And we can pray that something will be resurrected in us that will shift this very earth on its axis.

Jesuit Fr. Joseph Brown is a professor and chair of the Department of Africana Studies at Southern Illinois University at Carbondale.]

Spirituality | Death of innocents a call to renewal this Easter

O we of little faith

Eucharist must create culture that welcomes all, says Manila cardinal

God has made a universal covenant with people everywhere