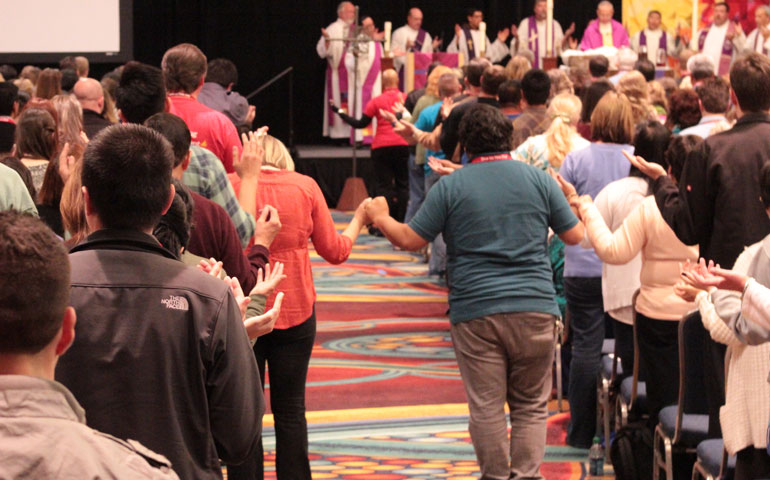 As he approached the podium in the giant arena, keynote speaker Mark Shriver said in a matter-of-fact tone, "All I can offer you is a story about a guy living a faith-filled life -- he wasn't perfect, but he was a good man."

Shriver, author of The New York Times best-selling memoir A Good Man: Rediscovering My Father, Sargent Shriver, talked about his father, the late Sargent Shriver, who created the Peace Corps and expanded Special Olympics around the globe.

"Love was more important than a career or position [to my father]," Shriver said. "He had a profound faith in God and he put that faith into action. … Goodness in small acts -- we can all do that."

Shriver's speech, like the many others during the Los Angeles Religious Education Congress Feb. 22-24, distracted conversations from the unsettling news that had recently unfolded in the Los Angeles archdiocese.

After the release in January of internal church documents revealing how Cardinal Roger Mahony had protected priests accused of sexually abusing minors during his time as head of the archdiocese, Mahony's successor, Archbishop Jose Gomez, relieved him of his public duties.

Mahony was scheduled to speak on immigration at the congress on Feb. 23, but was nowhere to be seen. "The Cardinal was not at Congress because he was preparing for his trip to Rome," Carolina Guevara, associate director of media relations for the archdiocese, told NCR in a March 4 email.

Homilies and talks briefly touched on the current disarray in Los Angeles, but the weekend focused on themes such as renewal, faith in action, and love.

Sponsored by the Los Angeles archdiocese's Office of Religious Education, the congress is the nation's largest annual gathering of Roman Catholics, according to organizers.

An annual Youth Day, held the day before the congress begins, is specifically geared toward teenagers.

"Youth Day gives teens an opportunity to experience a wider church at work," said Katie Hernandez, director of religious education and confirmation coordinator at Our Lady of Malibu Parish in Malibu, Calif. "They are taken out of their comfort zone -- and that's a good thing."

Gomez presided over this year's two Youth Day Masses Feb. 21 and emphasized to the young crowd gathered, "You are the present and future of our church."

Greg Aponte, an emcee during the morning rally and a youth leader at Nativity Parish in El Monte, Calif., said, "I feel like I belong here -- that everyone feels what I feel."

Over the course of the weekend, conference attendees were invited to "enter the mystery."

"Amidst the darkness and smog of our present day, there lies a mystery … a mystery of the human experience and of God if we only have the courage to rip through the veil," said Paul J. Kim, a speaker and music artist living in Orange County, Calif. Kim was a speaker at Youth Day.

"Faith in and of itself is a mystery," said Eric Cordeta, a member of the leadership council of Filipino ministry in Los Angeles. "Our life is a journey. We must walk together as brothers and sisters in this mystery."

Booths included: fair trade coffee made by Café Justo, a cooperative based in Chiapas, Mexico, that ensures sustainable wages for its workers; the Los Angeles archdiocese's gay and lesbian ministry; and various universities with graduate programs in theology.

While sitting at her booth, St. Joseph Sr. Martha Marie Linhares, 80, spoke about the many ministries she has been involved in throughout her 51 years as a woman religious.

Linhares taught, ministered in prisons, and volunteered in hospitals.

"My favorite part about coming to Congress is seeing old friends," Linhares said. "And vocations -- our sisters are getting older and we need fresh blood," she said with a laugh. Linhares is now retired and spends her time helping out with the Sisters of St. Joseph in Orange, Calif.

Tony Melendez, a guitarist who was born with no arms and plays with his feet, gave a talk titled "An Armless Embrace of Hope." He spoke and sang about forgiveness and building bridges with others.

Two music ministers who performed during the morning and afternoon rallies at Youth Day spoke about why they do their ministry.

"We have the ability to build bridges between everyday, secular life and God through music -- it's incredible," Jeremy Shoop told NCR.

Both Shoop, 31, and Ryan Clouse, 29, have been playing music for nearly 15 years and are currently music ministers at Holy Cross Church in Moorpark, Calif.

At the morning liturgy Feb. 24 at the Anaheim Convention Center, Bishop Kevin Vann of Orange, Calif., spoke about the Transfiguration marking the second Sunday of Lent.

"The apostles were gifted with a vision -- a preview of the resurrection of Jesus," Vann said in his homily. "This vision helped prepare them for the crucifixion that was to come, the dark days that were ahead."

"Experiences like congress -- moments of transfiguration -- are lanterns to hold … and carry us through," he said.

A version of this story appeared in the March 15-28, 2013 print issue under the headline: Education congress hears calls for renewal, unity.