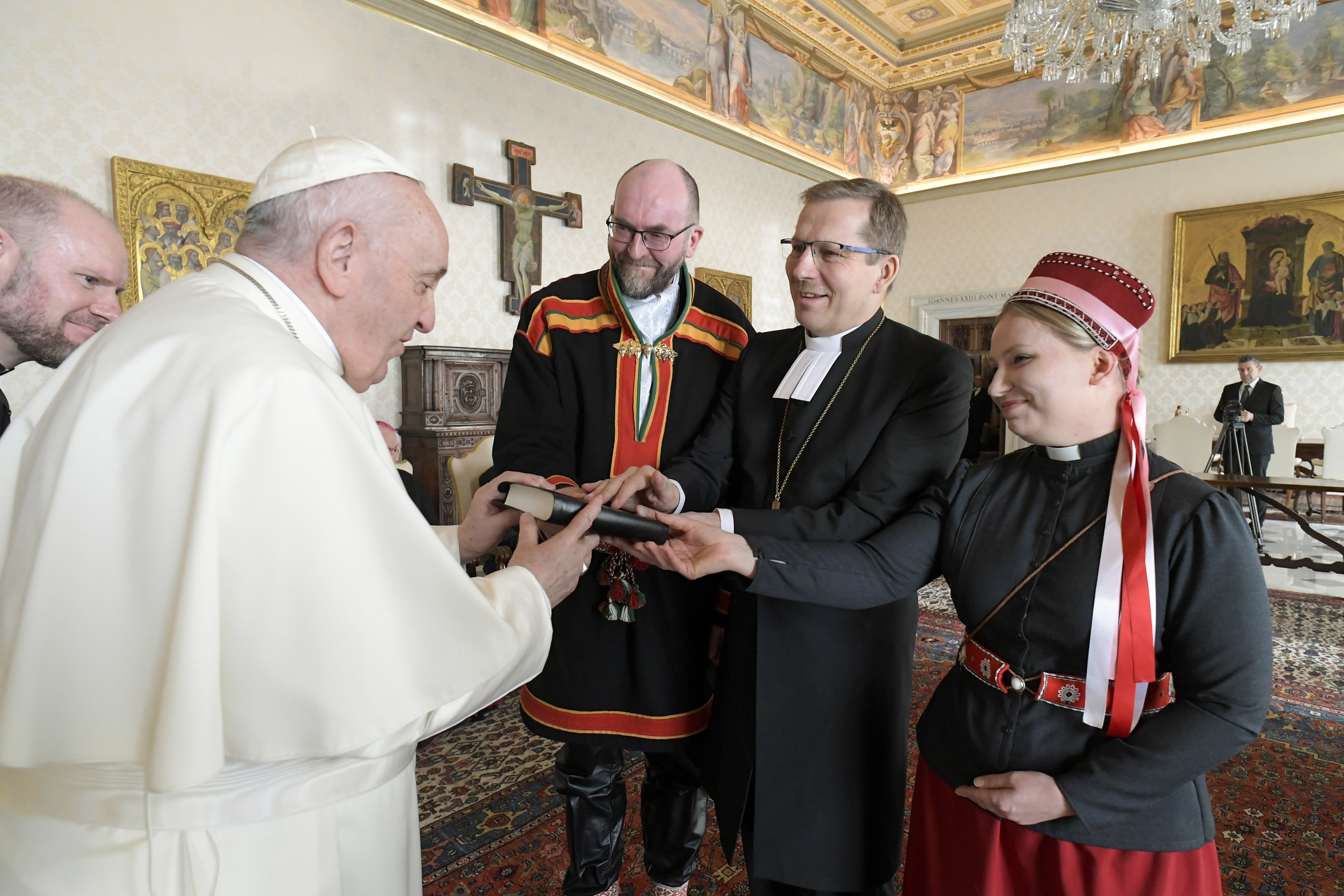 Pope Francis accepts a gift during an audience with an ecumenical delegation from Finland at the Vatican Jan. 17, 2022. (CNS photo/Vatican Media)

When the goal of Christian unity seems far off, “let us remind ourselves that we are making this journey not as those who already possess God but as those who continue to seek him,” Pope Francis told members of an ecumenical pilgrimage from Finland.

On the eve of the Week of Prayer for Christian Unity, the pope told the Lutheran, Catholic and Orthodox pilgrims that “we need to press forward with humility and patience, and always together, in order to encourage and support one another, for this is what Christ desires.”

Meeting Jan. 17 with the delegation, which included Lutheran pastors from the Indigenous Sámi community, the pope said he agreed with Lutheran Bishop Jukka Keskitalo of Oulu, president of the delegation, that humility and patience also are essential to the reconciliation process Christian churches are called to engage in with Indigenous communities.

As in many other countries, the process of sharing the Gospel with the Sámi and offering them a Western education often led to the suppression of Indigenous culture and language.

Bishop Keskitalo said the people of Finland are now trying to listen to the stories of the Sámi people and seek truth and reconciliation, according to a press release from the Finnish Lutheran church.

“We are also coming to the moment when the entire Evangelical Lutheran Church in Finland, and other churches, should apologize to the Sámi,” the bishop told the pope, according to the press statement. “Of course, there is no need to apologize for bringing the good news of the Gospel to all people; repentance and a possible apology concern the abuses and structural sins of the past that continue to affect people's lives.”

Pope Francis prayed that God would accompany the people of Finland ”on the journey toward reconciliation and the healing of memories and make all Christians free and determined in the earnest search for truth.”

And, he said, as the journey toward Christian unity continues, two important anniversaries are approaching that will give Christians an opportunity to see how far they have come and to ponder what their next steps might be.

“In 2025, we will celebrate the 1,700th anniversary of the Council of Nicaea,” which acknowledged Jesus to be “true God from true God” and “consubstantial with the Father,” the pope said. Those foundational statements of faith unite all baptized Christians.

“In view of this great anniversary, let us renew our enthusiasm for journeying together in the way of Christ, in the way that is Christ,” the pope said. “For we need him and the newness and incomparable joy that he brings. Only by clinging to him will we reach the end of the path leading to full unity. For it is Christ whom the men and women of every time, including our own, are seeking, however unconsciously.”

The second anniversary is “in 2030 — whether we will be around or not, I don't know,” the 85-year-old pope told the group. The year will mark the 500th anniversary of the Augsburg Confession, a document that is now seen as a key summary of Lutheran faith.

But, the pope said, when it was presented in Augsburg, Germany, on June 25, 1530, “at a time when Christians were about to set out on different paths, that confession attempted to preserve unity.”

“We know that it did not succeed in preventing division, but the forthcoming anniversary can serve as a fruitful occasion to encourage and confirm us on our journey of communion, so that we can become more docile to God's will, and less to human strategies,” the pope said.