The God-given desire for connection 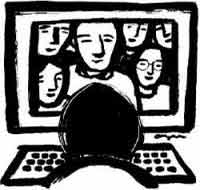 After my husband and I adopted our son, FedEx and UPS visited regularly with gifts from friends and family. One day a package arrived all the way from Australia. Inside was a personalized original piece of artwork by my artist friend Marianne. I would have loved to drop by or give her a call to thank her for it.

Except that I have never met Marianne IRL (in real life).

Marianne and I met through our blogs. Hers about her artwork, mine about knitting. The craft blogosphere is huge. Thousands -- maybe even tens or hundreds of thousands -- of women share their creative endeavors with like-minded crafters around the country and the world.

In the two years I have been blogging, I have "met" dozens of women I now consider friends. We share not only knitting patterns but also parenting advice and prayers for myriad intentions. The only thing we don't share is the same physical space.

In the Internet's early days, critics -- many of them church folks -- assumed that online relationships were, at best, second-rate. At worst, they could be dangerous, luring people into fake intimacy with disingenuous strangers far away and tempting them to ignore relationships with people sitting right next to them. You know, real people.

But Marianne is a real person. So is Laura, whose son lived in the same orphanage in Vietnam as ours. We met through an international adoption listserv and have corresponded via e-mail and on the phone during the long adoption process. She lives in Tennessee, while I'm in Illinois. We hope to meet in person some day.

Sometimes cyber-relationships evolve into real-life ones. Almost everyone knows a married couple who met online. And sometimes real-life friendships turn into online ones, when friends move across the state, country or world. Or online communication supplements real-life relationships, helping friends who live nearby keep in touch more often than is possible with in-person visits or phone conversations.

Even the surprisingly technology-savvy Pope Benedict XVI (who reportedly has an iPod) has jumped on the online bandwagon with his own video blog on YouTube (youtube.com/user/vaticanit). In January, Benedict released a message praising the Internet for the opportunities it gives us to satisfy our God-given desire for connection.

"Young people, in particular, have grasped the enormous capacity of the new media to foster connectedness, communication and understanding between individuals and communities, and they are turning to them as means of communicating with existing friends, of meeting new friends, of forming communities and networks, of seeking information and news, and of sharing ideas and opinions," the pope writes in "New Technologies, New Relationships: Promoting a Culture of Respect, Dialogue and Friendship."

But Benedict also warns of the possibility of shallow cyber-friends trivializing the true experience of friendship or of online obsessions interfering in our real-life relationships.

He's right: There are dangers to social media. Some people, myself included, spend too much of our day tapping on our computers. And many younger people clearly misunderstand the term "friend" if they think everyone who extends a "friend request" via MySpace or Facebook is worthy. Finally, without the nonverbal cues of an in-person interaction, the possibility for misunderstanding increases. Emoticons just don't suffice.

One of the advantages of online relationships, however, is the diversity of the people you meet. My craft and adoption friendships span continents as well as the entire political and faith spectrums. My friend Heidi in Colorado is Mormon, Michelle in Oklahoma is a conservative evangelical Christian, and a few would consider themselves agnostics.

But it's obvious that real community has been created when you see the generosity of online friends who rally to support one another -- psychologically, spiritually and materially -- when someone is in need, whether because of personal or natural disaster.

I've witnessed this in the Catholic online community recently in response to the untimely deaths of two bloggers. In December Emilie Lemmons, columnist for the Minneapolis/St. Paul archdiocesan newspaper, mother of two young boys under 3 and longtime blogger, announced that the cancer she had been fighting for a year and a half was incurable. She died on Christmas Eve.

I knew Emilie in real life. Six years ago we roomed together on a trip to the former Yugoslavia for young Catholic journalists. We had since kept in touch via e-mail and through our blogs. Hers -- called Lemmondrops (lemmondrops.blogspot.com) -- was about marriage, motherhood, life and eventually cancer. When her husband posted the news of her death along with a quote she wanted shared with her blog readers, more than 350 people commented with condolences.

In early February, popular Catholic blogger and author Amy Welborn posted the news that her husband Michael Dubruiel, also a Catholic writer and blogger, had collapsed at the gym that morning and died. He was 50. Amy admits that she is processing her grief by writing -- both on her blog and more privately on her Facebook page. Again, hundreds of readers and lurkers wrote with condolences, memories of Dubruiel and promises of prayers.

Some may find it hard to imagine such intimacy with someone you've never physically seen. But isn't that the kind of relationship all of us have with our God? Real doesn't have to be real life.

Printed in the March 6 issue of NCR.

Spirituality | The God-given desire for connection

Fifteenth Sunday in Ordinary Time: The image of God