God may just be a sci-fi fan 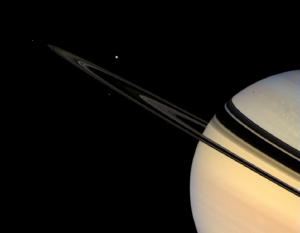 Saturn's rings shine dimly in scattered sunlight. One of Saturn's moons, Tethys, is visible in this view, acquired by the Cassini spacecraft's wide angle camera. (NASA)

Science fiction is a proud genre of literature. From the quirky cautionary tales of Philip K. Dick to the sociological extrapolations of Ursula K. Le Guin to the grand entertainments of Robert Heinlein, Arthur C. Clarke or Isaac Asimov, it provokes wonder and mind- stretching with its frisky curiosity and its hints of fantastic secrets barely glimpsed.

Another caretaker of the sense of wonder has traditionally been religion. In bygone ages religion’s stock in trade was contact with the wholly other, the divine mystery, the miraculous.

For example, see the Old Testament, where Moses chats with a burning bush, a whirlwind stumps old man Job or playful, creative Wisdom frolics with God before time began. Our spiritual ancestors looked around, open-eyed, and wrestled with the big questions, speculating about the deepest unknowns -- kind of like good science fiction.

We have relegated such tales of genuine religious experience to the pedestal of holy writ, at the same time ignoring their counterparts today. Religion has neglected its age-old role as a caretaker of wonder, yielding it instead to scientists.

Who chats with stars? Who penned psalms after witnessing the titanic collision between a comet fragment and Jupiter’s gargantuan maelstrom of storm clouds -- one storm being 400 years old and so big three Earths could fit within it?

A powerful stellar explosion detected last year by NASA’s Swift satellite shattered the record for the most distant object that could be seen with the naked eye. The explosion, which took place halfway across the universe, was so far away that its light took 7.5 billion years to reach the Earth.

We know that whole galaxies with more stars in them than all the grains of sand on all Earth’s beaches are running away from us at nearly the speed of light or disappearing into enigmatic holes like the Cheshire Cat’s smile.

Yet who is astonished with amazement, shaken Job-like to the core, deep- down touched, wondrously moved?

Astronomers are, and this year is the International Year of Astronomy, when the world celebrates and commemorates the 400th anniversary of Galileo’s use of a telescope to study the skies.

“If God made the universe and he loved it so much that, as we Christians believe, he sent his only son, it’s up to us to honor and respect and get to know it,” said Jesuit Br. Guy Consolmagno, curator of meteorites for the Vatican Observatory.

By seeing how God created, we get a little sense of God’s personality. We can’t impose our idea of how God did things. It’s up to us to see how the universe actually does work.”

“We can’t come to the nature of God, unless we also have some knowledge of the nature of the universe,” said Jesuit Fr. George Coyne, former director of the Vatican Observatory.

A way to celebrate the astronomy year is to visit the Astronomy Picture of the Day Web site (apod.nasa.gov) and see thousands of photos from the Hubble telescope, from observatories around the world and from the Cassini planetary explorer spacecraft or the Phoenix Lander on Mars.

A sampling of recent pictures:


Modern faith bets that the majesty and unimaginable scale of the universe are meaningful, that the cosmos is ultimately friendly.

God created a dazzling, magnificent universe. “Such a God,” says spiritual writer Anthony Gilles, “deserves more than our moral rectitude; that God deserves our wonder and praise, even our enjoyment.”

A God who is capable of such craft is one to desire for company. Hell doesn’t deter us from sin as well perhaps as the heavens lure us away from it.

God is a live wire, an imaginative story lover, probably a sci-fi fan.

Rich Heffern is an NCR staff writer. His e-mail is rheffern@ncronline.org.

Spirituality | God may just be a sci-fi fan

Experiencing God at a rock show