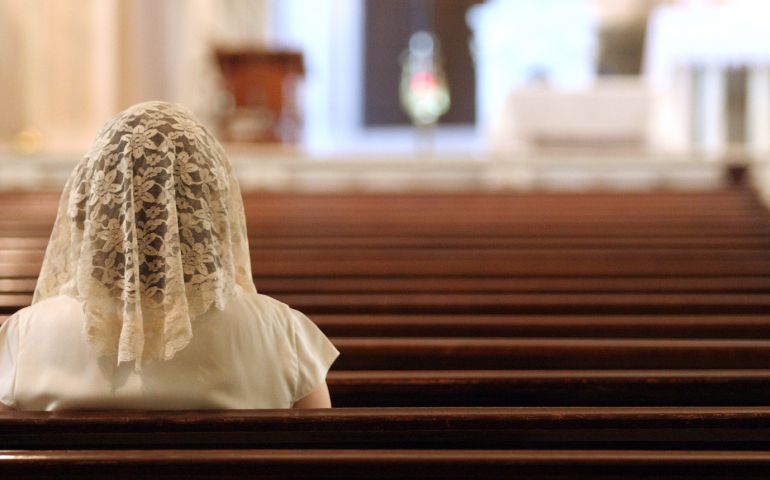 Retro is in, and I’m all for it, if by “retro” you mean “Mad Men,” midcentury modern furniture and martinis. But mantillas? That’s one fashion trend this vintage-loving girl is skipping. Although I adore the styles of the ’40s, ’50s and ’60s, I definitely prefer a more 21st-century attitude toward women.

If traditionalist Catholic blogs are to be believed, veil wearing in church is making a comeback. The biggest supporters? Young women, who see it as a countercultural sign of their devotion to the church. A recent Facebook photo of a young woman, hands folded in prayer and head topped by a lace veil, garnered dozens of “likes” and comments gushing about how it’s an “amazing way to express our faith” and “honor the Blessed Mother,” as well as an antidote to “immodest dressing.”

Other websites supporting a return to head covering for women note that it’s a privilege, not a sign of submission, since the only other “covered” things at Mass are clergy, the tabernacle and the chalice. That’s a stretch. Most supporters cite 1 Corinthians 11:5-6, which says that “any woman who prays or prophesies with her head unveiled disgraces her head ... she should wear a veil.”

It’s not surprising that traditional Catholics who prefer their nuns in habits and priests in cassocks would want to get in on the dress-up fun. And I understand the power of a nonverbal message sent through clothing. It’s why police officers wear uniforms, gang members wear colors and Packer fans wear cheeseheads.

But some of these enthusiastic would-be veil wearers don’t seem to see the contradiction in “getting up the courage” to wear a veil as an in-your-face expression of submission and humility. A few even noted how great a veil is for “blocking out distractions” at Mass, as if fellow worshipers are an annoyance during private me-and-God time.

A little history (beyond the romanticized “it was better then” type) might be in order. Veils and other head coverings, for both women and men, have had various meanings throughout history, and it is true that style of dress sometimes signified marital status, purity and virginity, or deference before a deity. While men sometimes have covered their heads for prayer (think Jewish yarmulkes), the cultural requirement for women to cover their heads has often extended not just to prayer and worship but to include any time she was in public (think Muslim hijabs).

For centuries, the church’s interpretation of Paul’s (admittedly confusing) words in 1 Corinthians 11 has been that women should cover their heads at Mass -- a tradition that was enshrined into church law in the 1917 Code of Canon Law. Since the 1983 code revision did not address the head-covering canon (1262), veil wearing is no longer required.

Some mistakenly believe Paul is saying that “any woman who prays or prophesies with her head unveiled” is the same as a prostitute (“having her head shaved”). Most biblical scholars today say that was not the practice in first-century Corinth. Even if it were, adopting practices from biblical times that have no meaning today makes little sense. Catholics are not the Amish. We use electricity, avail ourselves of modern medicine and walk around without bonnets and hats.

Yet covering women’s heads does still have meaning today, and that meaning is hardly a feminist one. Despite the attempts of some Muslim feminist women to claim the hijab as liberating, most today see the covering of women’s heads as quaint or backward, if not downright repressive. It’s not an unsubstantiated assumption, given that historically some women’s head covering has meant to limit men’s sexual temptation for them and often has symbolized submission to a husband (this may have been Paul’s point in 1 Corinthians).

Even wedding veils, part of the princess bridal attire that many American girls dream of, have their roots in patriarchy. In an arranged marriage, a husband unveiled his wife to symbolize his taking possession of his wife (from her father), and the veil became a symbol of virginity and purity, as well as submission to her new spouse.

I wouldn’t be so skeptical of head covering if it applied to both men and women. If modesty is a Christian virtue, why wouldn’t believers of both genders be called to demonstrate it by covering their heads? In fact, the opposite is true for men: Tradition requires that men remove their hats to show respect, most likely because historically hats symbolized status.

Unfortunately, most traditionalists calling for a return to veil wearing believe in complementarity, that women and men’s differences complement one another. This justifies separate roles, usually men as leaders and women as followers, thus the emphasis on submission, humility and modesty as virtues for women.

I’m all for submitting to God, and for the virtues of humility and modesty -- for men and women. Any implication that it’s just for women belongs in the past, with all those lace veils.

[Heidi Schlumpf teaches communication at Aurora University in the Chicago suburbs and is the author of While We Wait: Spiritual and Practical Advice for Those Trying to Adopt.]

Poetry is the best theology