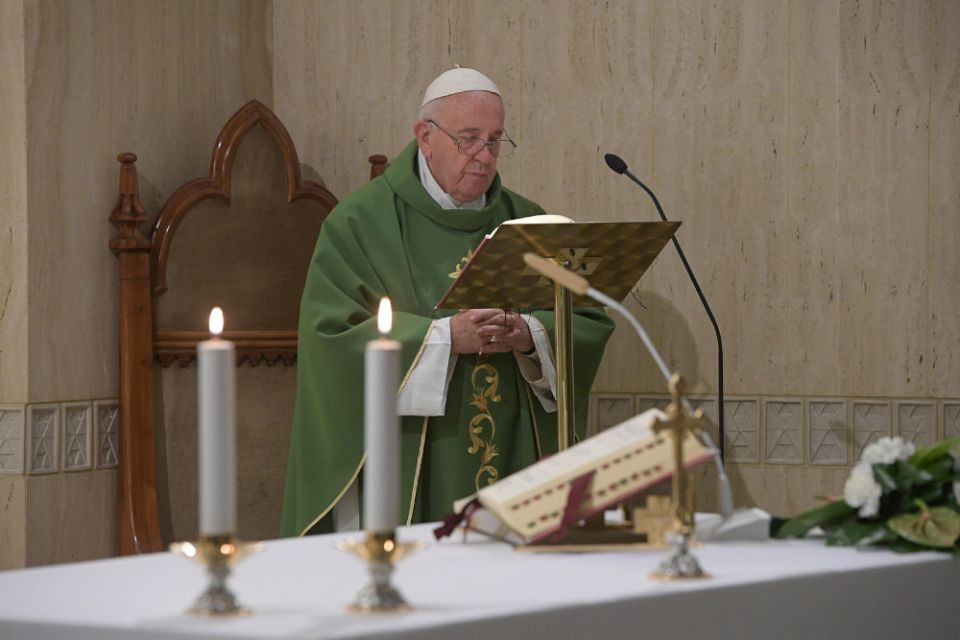 Pope Francis celebrates morning Mass in the chapel of his residence, the Domus Sanctae Marthae, at the Vatican Nov. 5, 2019. (CNS/Vatican Media)

Washington — If experience can't prove it, data scraping will: Catholic sermons are shorter than their Protestant counterparts.

According to an analysis of 50,000 sermons — Catholics commonly refer to theirs as homilies — the Pew Research Center determined that the median Catholic sermon is 14 minutes long.

Pew made its analysis by conducting data scraping, a technique in which a computer program extracts data from human-readable output coming from another program. Pew found its trove of sermons and homilies either posted on church websites or on YouTube.

The numbers sound right to Deacon Steve Kramer, director of the homiletics program at the Sacred Heart School of Theology in Hales Corners, Wisconsin, near Milwaukee.

"You can clock me, and I'll be anywhere between eight-and-a-half and 10 minutes. I may do 13, 14, 15 minutes, but that's more the exception than the rule," Kramer told Catholic News Service in a Dec. 12 telephone interview before the Pew study was released Dec. 16.

Kramer said he sees "no value" in longer sermons. "If you can say it, say it and get out," he added. He said the relative brevity of Catholic homilies is not because the church parking lot needs to cleared in time for the next Mass.

He said Catholic preaching tends to be shorter because of the nature of the Mass, which has both a Liturgy of the Word and a Liturgy of the Eucharist. Protestant worship, he added, has "minimal eucharistic services."

Kramer, who has a doctorate in ecumenical homiletics, was ordained a permanent deacon in 1994 for the Diocese of Rockville Centre, New York, but is now attached to the Archdiocese of Milwaukee.

Pew's analysis found the five most common words spoken in Catholic homilies are "say"," know," "God," "people" and "life," words that also were found in the top five in at least one of the Protestant groupings made by Pew.

The most distinctive words found in Catholic preaching — all done at rates 11 to 21 times as often as their Protestant counterparts — were "homily," "diocese," "Eucharist," "paschal" and "parishioner." In fact, a Catholic is four times as likely to hear the word "homily" than an evangelical to hear the phrase "eternal hell" or its variants.

Catholic preaching names Scripture 73% of the time; 68% of homilists cite a book from the New Testament, and 28% refer to a book from the Old Testament. This was the lowest rate of such citations among the groups studied. The next lowest group was Mainline Protestants at 88%. Smaller Catholic churches — 200 or fewer congregants — hear an Old Testament book mentioned 37% of the time, and the difference of 9 percentage points was larger than any big-small Protestant comparison.

"The Protestants have been much more engaged in the Word over the years," Deacon Kramer said. "When I was a kid, we didn't really read the Bible much. (The reading of) Scripture wasn't really encouraged until later on — Vatican II. In a sense, I guess, we're playing a little bit of catch-up."

And the reason behind the split between New Testament and Old Testament references? "Most of our people are not as familiar with the Old Testament," Kramer told CNS. He noted the seminary was soon to host its annual preaching conference, with the theme "Hearing the Hebrew Scriptures with a Heart for Homiletics," with a couple of rabbis leading sessions.

"Realistically, we have The New Testament, the Old Testament, the (Responsorial) Psalm and the Gospel. Those are the four basic things you can preach on any given Sunday," Kramer said. "In the last 30 years I can pretty definitely say the guys go more with the Gospel."

What's more, he added, the Old Testament reading usually has a tie-in to the Gospel. "Very few people preach to the Pauline readings," Kramer said. "We're really not adept yet at preaching them."

Catholic homilists tend to have "the theme of what they want to say. "'God is love'? OK, I can give you 10 minutes on that," Kramer said. "Longer is not necessarily better, and I've preached that in evangelical communities."

Like Catholic preachers' habits, evangelical preachers' habits may be slow to change. Kramer recalled being asked to serve as a guest preacher at an evangelical church. "How long would you like me to preach?" he remembered asking. The response: "Oh, keep it short — 40 minutes or so."

Jesus founded a movement led by both women and men