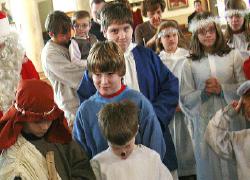 The cast of the Christmas play "An Angel for the King" prays before rehearsal at St. John the Baptist Parish in Larksville, Pa., in 2006. (Courtesy of the Times Leader/Charlotte Bartizek)

Growing up in the 1960s, I worshiped at two parishes. Both were Roman Catholic. However, the celebration of Mass was very different as I went back and forth from summers in metropolitan Virginia to school in northeastern Pennsylvania.

The basics of pre- and post-Vatican II liturgical celebrations were identical. Nevertheless, at one parish I often found myself daydreaming, planning the upcoming week’s calendar. The celebrant’s voice was monotone; his liturgical presence was lifeless; it was as if a vampire had drained every ounce of his blood. Hymns were the same selections over and over again, performed in a musical key not even the youngest Vienna choirboy could reach.

In contrast, whenever I attended Mass at the other parish, my mind, heart and soul became thoroughly engaged in the sacrifice of the Mass. The choir was vibrant and it inspired me (not being blessed with the gift of musical pitch) to sing every hymn. The pastor’s homilies explained and applied the meaning of the scriptures as if he understood our lives. I saw him at the altar not just as a priest but as Jesus celebrating the Last Supper with us. He even took the time to greet everyone as we left Mass. I would leave church thinking, “Wow! I wish I could be that excited about what I do each day.”

I didn’t realize it then, but my Virginia experience of Mass was sowing and watering the seeds of my vocation. It also would become my inspiration, as a priest, to write and direct a new Passion play every Lent.

My father, an entertainer and musical therapist, loved history and theater. He and my mother instilled in my brother and me the necessity of faith and worship as well as an appreciation for history and a passion for the arts. From my father, I came to realize that effective theater is effective liturgy.

Religion as theater has its origins in ancient Egypt. The first known theatrical performance was what we today would call a “Passion play.” Egyptian plays detailed the events of their gods. Ancient Greece expanded this blend of theater and the sacred to include other mythological characters.

Aristotle, writing in the fourth century B.C., believed that theater evolved from the practice of singing hymns to the god Dionysus. These hymns celebrated the dying and rising of this god, as well as that of every human being. Further plays included dialogue/singing between actors and audience. This was the early prototype for dialogue/singing between celebrant and congregation in liturgy.

The Greeks also gave us the blueprint of theater/church architecture that included “stadium” seating in the round. The ancient Romans expanded this blueprint by incorporating statues, columns, porticos, roofs and a fixed orchestral/choir space.

During medieval times, priests would perform short plays in Latin in their churches. Scripture stories were dramatized to familiarize an uneducated public with the Bible.

In England, wagons became moveable stages for short plays that would enact events from Creation to Judgment Day. This inspired the theater genres known as miracle plays, which presented the lives of saints and martyrs, and morality plays, which taught spiritual lessons. Later, the Italian theater popularized a new genre with sung dialogue. Known as opera, it reflected the influence and popularity of Gregorian chant.

In the 19th century, theater became more experimental in nature, with a growing emphasis on realism. This trend continued into the 20th century, when theater in the United States evolved into one of its most popular forms, the musical. Musicals gave us the style and composition of songs that have influenced many modern-day hymns.

I can still feel the excitement I had in 2000 while waiting in the rain outside the German theater to see the Oberammergau Passion play, the world-famous outdoor pageant that has been performed regularly in that town since 1634. Its grand style was the impetus for me to transform my “living Stations of the Cross” plays into Passion plays. I also recall the joy of attending the new musical version of “Lord of the Rings” this past year, an event that inspired me to write another Passion play, called “Fallen Angels.”

This leads to the question: Would people stand in the rain to attend Mass? Does the celebration of the Eucharist inspire and challenge us to transform ourselves the way effective theater does? When was the last time you left Mass deeply moved and eager to return again? Do we find joy in the proclamation of the word and in song?

The Eucharist is, of course, an awesome sacred drama that goes beyond even the most superb theater production. It connects us to the creative wonder of God’s immense, mysterious love, which unconditionally allowed his son to become one of us, to suffer, die and rise for us and in us. The Mass invites us onto the eternal stage where no curtain or bad seat distances us or veils our sight.

Effective liturgy planning and presentation make the inherently powerful reality of the Mass accessible. Just as excellent theater is the collaborative effort of a team that combines skill and talent to deliver a powerful performance, effective liturgy is the result of a similar effort. Therefore, theater has much to offer those who strive for excellent liturgy:

In addition, does the interior of our church building provide prayerful, tranquil space? Like a good overture, is instrumental music, live or recorded, used to enhance the meditative experience before the celebration? Are there liturgical “traffic jams” during the distribution of the Eucharist? Are ushers or greeters prepared to direct congregational traffic?

Good liturgy will also reflect the six elements for good theater that Aristotle presents in his Poetics:

1) Plot: Every play has a beginning, middle and end. Do our liturgical celebrations reflect that there is an introductory rite, Liturgy of the Word, and Liturgy of the Eucharist? Is the theme of the Mass or special feast announced? Are our prayers of the faithful a meditative prelude for the setting of the eucharistic table? Are silent pauses properly observed -- especially after Communion? Are there entrance, offertory and dismissal processions?

2) Character: Directors and actors need to study the script. An accomplished actor becomes the character he or she plays.

Have the celebrant, deacon and lectors done their homework by preparing and meditating upon the readings, the homily and prayers? Does the celebrant pray together with all ministers before celebrating Mass? Everyone who leads the liturgical celebration must become what they represent and proclaim.

3) Idea: We get the play’s message across when script, props, costumes, sound, scenery and lighting work in sync with each other.

Are servers, ministers, lectors, cantors, choir, greeters, ushers and celebrant in sync -- all on the same page? Many a liturgy is lost because the sound system is ineffective. How can the message go forth if it is not heard? Does the interior lighting enhance each part of the Mass, or is the sanctuary one continuous blur of light? Is the sanctuary visible, or is it in need of elevation? Visible elements should cue the assembly to the liturgical purpose, season and theme.

4) Language, spoken and unspoken: A theater marquee announces what will occur inside, and its message entices people to enter.

Before a word is said, the church’s exterior should proclaim: “Welcome.” Is it manicured and clean? Is the liturgical season evident in color (buntings, banners and plants) or in symbols (cross, crèche)? Once people are inside, does the “Welcome” continue in the warm smiles and reassuring words of greeters, of those providing bulletins and directions? Room temperature is also a way to welcome people into a comfortable space.

The most significant message is conveyed in the attitudes, actions, gestures and prayerfulness of the celebrant and other ministers. Proper eye contact, voice clarity, emphasis, diction, pace and pause are a must for all who proclaim the word. No director would allow an actor to muffle his lines; if we do, we miss conveying the beauty that the scriptures and prayers contain.

5) Music: In theater, singing and instrumentation should enhance and never detract from the story.

Spectacle in church can dazzle our souls. Special spectacles include Holy Week services, especially the reading of the Passion narrative by several gender-appropriate voices; Passion plays; living Stations of the Cross; Seder meals; Christmas plays; and other displays. Yet in its truest form, effective spectacle is never showy or gaudy. It combines the elements of theater and liturgy with dramatic intensity.

The results of applying these principles are the test of either effective theater or worship.

Do we experience a beautiful taste in our souls, an exquisite, peaceful courage in our hearts and a dreamlike stimulation in our minds? Are we enthusiastic about returning for more? Are we eager to unite with Christ, who is present and active as the source of our Christian lives?

Theater stimulates our imaginations to want to live and die with the characters. In essence, liturgy -- with its basic moments of gathering, welcoming, proclaiming the Word and celebrating the Eucharist -- invites us to use our imaginations, our hearts and our souls so that we experience what it means to live, die and rise with Christ. The paschal mystery is the ultimate theater experience.

Fr. Gerald Gurka is a priest and pastor in the Scranton, Pa., diocese. He also is a playwright and director of seasonal liturgical plays at his parish. This article first appeared in the October issue of Celebration, NCR’s sister publication.