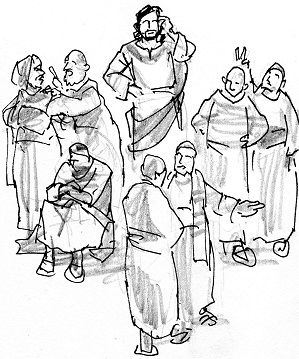 If the story is true, one of the reasons Jorge Bergoglio became pope was a brief talk he made during a preconclave meeting about the need for the church to go outward. Many of the cardinal electors saw this approach as the answer to the perception that the church had become too self-referential and defensive. Going to the margins was the way to renew the church’s identity and mission to evangelize the world.

The same idea was once expressed simply by a coach who said he didn’t know how good a player really was until he stopped improving.  Growth is a sign of life and purpose. Lack of growth is a sign of stagnation.

Today’s Gospel shows us Jesus selecting apostles to expand his preaching mission.  The Twelve represent an interesting sample of human potential and problems. It is as though Jesus wanted to show the power of grace to make a community out of very different personalities, some even in conflict with each other.  Four original disciples were from Galilee: Peter, Andrew, James and John, two sets of brothers, all fishermen. The others included Matthew, a former tax collector, a zealot named Simon, a practical person named Philip, a skeptic named Thomas, and someone called Judas, who would turn out to be a traitor.

Jesus gives them authority to heal sickness and cast out demons. Even Judas is authorized to preach and perform these miracles in the name of Jesus. But Jesus limits their mission. They are to go only to the “lost sheep of the house of Israel,” not among the pagans or to Samaria. At this stage in his ministry, Jesus seems focused on the Jewish people as the extent of God’s Kingdom.

This is revealing, because five chapters later, Jesus will be drawn over the border into pagan territory when he encounters the Syrophoenician woman who asks him to heal her daughter (Matt 15:21-28). The mission, and even Jesus himself, are apparently still growing. Despite his divinity, Jesus is learning the will of his Father in a human way through outside influences and encounters.  Jewish exceptionalism is being stretched into universal salvation.

The Good News for us in this Gospel is first, that imperfect people are called to be apostles, people with weaknesses and conflicts, even some capable of great sin and failure.  God’s plans are worked out through ordinary people struggling in community. Secondly, human life is about learning and growth. At each stage, limits fall away to the freedom to expand our horizons and change our minds to do new and bigger things.  God is always authorizing more life, more risk-taking and creativity.  We don’t need to stay on defense or in comfort zones, within familiar limits instead of at the margins, where growth occurs.

The meaning of the word apostle is “one who is sent.”  Beginning with the prophets, everyone who is called to be a disciple begins by saying, “Here I am, Lord, send me.”

Living in a wavy universe