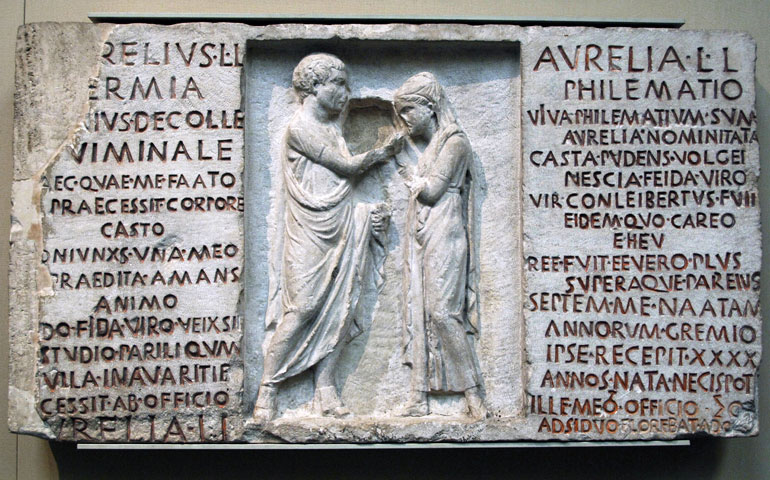 Debate over same-sex marriage is raging these days in the United States, be it in the courts, the media, the U.S. Conference of Catholic Bishops, and even among one's friends and family. Deep beneath the breakers runs a broad stream of little-known history that might bring some calm.

For most of us, marriage has been shaped by our culture, largely founded on the Book of Genesis and developed over centuries of tradition. God created humans male and female -- Adam and Eve -- to be partners who cling to each other to carry out the mandate to increase and multiply. After the fall, the rest of Genesis recounts the results: The descendants increase and evil multiplies. God determines to make a new start: the flood, Noah and the family ark, a covenant that guarantees God's protection. But the mandate to increase and multiply remains.

And so it goes for the centuries recounted in Exodus, Leviticus, Numbers and Deuteronomy, with marriage as a primary institution. To fulfill the mandate, husbands have many wives; family members marry each other; masters impregnate slaves, sometimes founding a new people (Abraham, Hagar and the Ishmaelites); boys marry at 14 and girls at 12 -- all to ensure the continuity of households. In this long process, the mandate is well on its way to fulfillment, but a cloud hangs just over the horizon: What to do when the mandate is fulfilled?

Adopting Genesis and the rest of the Bible as their own, Jews and Christians in antiquity adopted the institution of marriage as defined in its pages. Yet marriage was also an institution of the world in which they lived, a Roman world, where true marriage -- matrimony -- was a partnership in which a couple consented to live together with mutual affection and respect and to raise a family. For pagans, Jews and Christians, mutual consent was legally and literally the heart of the matter in their Roman world, and from which a series of laws and customs flowed, including their distinctive ways of getting married.

As Christians spread westward, becoming more numerous -- by mid-fourth century 30 million of a population of 60 million in the Roman Empire -- some early Christian thinkers began to worry about the cloud on the horizon: Heaven was already too full. Indeed, St. Augustine, the celebrated bishop of Hippo in Roman Africa from 395 to 430, thought the cloud had already moved from the horizon to the center of his Mediterranean sky, overshadowing, indeed threatening, his "City of Man."

Commenting on the Book of Genesis, Augustine reasoned that after the fall from paradise, Adam and his descendants were bound by the precept to increase and multiply until it had been fulfilled by Abraham and his descendants, the patriarchs. Now fulfilled, he concluded, the mandate to increase and multiply had been replaced by a concession: allowing couples to have intercourse without the mandate to procreate. Indeed, St. Paul had proposed a remedy that "it is better to marry than to be aflame with passion" (1 Corinthians 7:8-9).

Augustine saw that marriage was here to stay, offering three important social benefits -- fidelity, offspring and a sacred union. By fidelity, he meant the commitment to have sex only with one's spouse; by offspring, having and raising children; and by a sacred union, a bond signifying the indissoluble union between Christ and the church described in the Letter to the Ephesians (5:31-32).

As time passed and the population grew, Augustine's thinking about marriage gradually changed. Tutored by his Roman world and his pastoral life as a bishop, he came to see what made marriage marriage: mutual consent to a life together characterized by marital affection and respect. The importance of offspring, so prominent a reason for marriage, gradually receded in his mind, for his pastoral life brought him face to face with countless childless marriages he considered true marriages.

Augustine's thinking about sex and marriage has been at the root of the traditions about sex and marriage in the West, because he was the only church father to write extensively about sex and marriage. Christian thinkers and writers for centuries have been deeply beholden to Augustine. With the rise of universities in the late 12th century, for instance, their masters -- the early Scholastics -- sought to determine how marriage in their secular world fit into their sacramental world. A sharp debate arose among them about what constituted true marriage. One group argued that it was at the point of sexual consummation true marriage exists, because consummation embodied the union between Christ and the church. A second group argued that it was consent given in the present to live together as equal partners with mutual affection and respect that embodied the union. By the end of the century the "consentist" position had won the debate, largely because its architect, the prominent Parisian theologian Peter Lombard, had written a textbook that became the theology text for the next 400 years.

Thus, for some 1,600 years, what made a marriage a true marriage was consent, from which its three benefits -- fidelity, children and sacred union -- flowed. Whether a couple could have children was, like sexual attraction, nature's call -- not what makes marriage marriage. Although same-sex couples can have a child by adoption and nurture the child in a home characterized by mutual affection and respect, they cannot beget a child of their own. That same situation often is the case for an opposite-sex married couple who adopt and nurture. Neither couple can be said to contravene the law of nature by marrying.

Given the percentage of people for and against same-sex marriage, more than 60 percent of our citizens, including Catholics, seem to agree with what our Western predecessors concluded about what truly constitutes marriage, whether for an opposite-sex or same-sex couple, namely, consent to a life together of partners infused with affection and respect constitutes true marriage, from which the social benefits flow.

[Thomas M. Finn, chancellor professor of religion (emeritus) at the College of William and Mary in Williamsburg, Va., published the article "Sex and Marriage in the Sentences of Peter Lombard" in Theological Studies, March 2011.]

A version of this story appeared in the Aug 2-15, 2013 print issue under the headline: Marriage equality: a historical view.