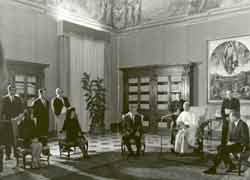 HUNTSVILLE, Ala. -- Astronaut Buzz Aldrin was the first human to witness how liquid behaves in the weak gravitational field of the moon -- but this was no science experiment.

This was a believer giving thanks to God for an extraordinary adventure.

Forty years ago, in the first moments of July 20, 1969, after Aldrin had piloted the Eagle lunar module into the dust of the moon with only seconds of fuel to spare, he asked NASA for a radio blackout. He suggested that people around the world take the opportunity to "contemplate for a moment the events of the last few hours, and to give thanks in his own individual way."

Then, during the radio silence, Aldrin opened a packet of bread and a vial of wine that had been blessed a few weeks earlier at his home church near Houston, Webster Presbyterian. Aldrin unfolded a paper on which he'd copied Jesus' words from John 15: "I am the vine, you are the branches ..."

"In the one-sixth gravity of the moon, the wine curled slowly and gracefully up the side of the cup," Aldrin wrote in a story published in 1970 in Guideposts magazine. "I ate the tiny Host and swallowed the wine. I gave thanks for the intelligence and spirit that had brought two young pilots to the Sea of Tranquility."

Though he was in the cramped module with Neil Armstrong, who did not share his faith, resting in a fragile vehicle on the face of the moon's "magnificent desolation," as he would later describe it, Aldrin said he did not feel alone.

"I sensed especially strongly my unity with our church back home, and with the church everywhere," Aldrin wrote.

That continued sense of Christian unity, and a spirit of thanksgiving and marvel for the wonders of the space program, was celebrated again July 19 during services at Huntsville's Monte Sano United Methodist Church.

It's the fourth year that the congregation, which includes astronaut Jan Davis and other space scientists, has celebrated "Lunar Communion" on the Sunday closest to the anniversary of the Apollo 11's moon landing.

Church leaders say that as far as anyone knows, only Monte Sano, near NASA's Marshall Space Flight Center, and Webster Presbyterian, near Houston's Johnson Space Center, mark the historic moon landing with a Lunar Communion service.

Davis said she found her own faith augmented by the viewpoint of Earth from space.

"I really believe that when you look at the Earth, you just feel close to God because you realize the beautiful creation of the Earth -- it's just unbelievable," Davis said.

"Going around the Earth once every hour and a half, you see it changing every time. It's like when I'm out in nature, in the woods or at the lake. I feel closer to God there. It really does strengthen your faith."

Bringing some of that universal insight to Earth is part of the reason for the service, said the Rev. Dale Clem, pastor at Monte Sano.

"One of the things we talk about in the service is how God created us with a mind, with creativity, imagination and adventure," Clem said. "I think loving God with our whole mind has something to do with that. We're affirming that."

And Aldrin's example of considering how to integrate his beliefs into his professional calling is another aspect to consider, Clem said.

"This was his quiet way of practicing his faith," Clem said. "All of us have to quietly figure out how to live our faith."

The Lord's Prayer prays for God's will to be done "on Earth as it is in Heaven," Clem said. This service adds a new dimension.

"This was a new frontier," Clem said. "This is a way to say that God is everywhere, in the universe as well as in Heaven. This is just a way to widen our world view."

[Kay Campbell writes for The Huntsville Times in Huntsville, Ala.]

The catechism of our senses