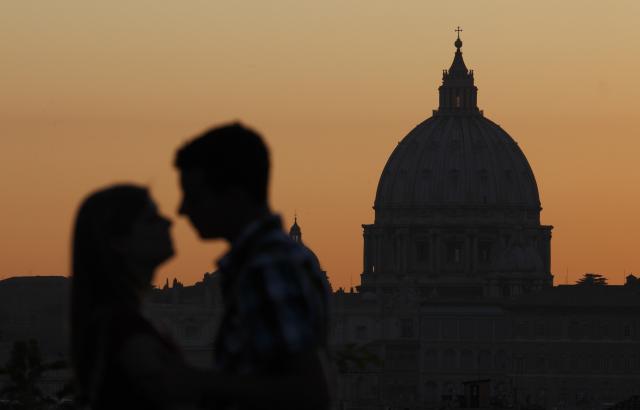 The dome of St. Peter's Basilica is seen at sunset as a couple kiss near Villa Borghese in Rome Oct. 11. (CNS photo/Paul Haring)

We wholeheartedly second the invitation by Australian Bishop Geoffrey Robinson for a thorough and honest reexamination of the church’s teaching on sexuality. (See story.) Robinson’s invitation, coming in a paper delivered in Baltimore at a conference sponsored by New Ways Ministry, is a gentle but elegant plea that offers hope for Catholics who want to stop the church’s headlong plunge into irrelevancy as a moral voice in our culture.

Robinson says that a careful study of the long arc of church teaching on sexuality comes to this foundational statement: “The church is saying that love is the very deepest longing of the human heart, and sex is a most important expression of love, so people should do all in their power to ensure that sex retains its ability to express love as deeply as possible.”

Rather than seeing sexual sin as an offense against God because it is a violation of the divine and natural order established by God, look at sexual morality in terms of the good or harm done to persons and the relationships between them. Robinson says he thinks God is “not easily offended.” He continues, “All the evidence tells us that God cares greatly about human beings and takes a very serious view of any harm done to them, through sexual desire or any other cause.”

Rather than trying to discern good or bad in objective acts -- was this act unitive and open to procreation? -- look at how the intentions and circumstances surrounding what a person does or doesn’t do lead toward or away from loving deeply. “Sexual acts are pleasing to God when they help to build persons and relationships, displeasing to God when they harm persons and relationships,” he writes.

Rather than narrowly focused attention on a few explicit Bible verses devoted to sexual morality, use the best of scripture scholarship to understand the Bible as the unfolding story of a journey, the spiritual journey of the people of God. No single verse or collection of verses can be seen as the final word of God on a subject, Robinson writes.

Robinson is not the first to articulate the need for a responsible reexamination of sexual ethics, one that takes seriously the radical call to selfless love, but the addition of a bishop’s voice adds new dimension to the conversation. By rebuilding Christian morality in the area of sexuality in the way Robinson suggests, we will achieve a teaching that can better challenge the message about sexuality trumpeted by the dominant culture in television, music and advertising, a sexuality that idolizes self-gratification and that puts “me” before “you.” By placing the needs of the other first, our sexual ethic would reject sexual violence -- physical and psychological, the idolatry of self-gratification, the objectification of people, and the trivializing of sex when it is separated from love.

Unlike sex centered on “me,” our new Christian sexuality, centered on the other, would respond to the deepest longings of the human heart, promote commitment between people, cherish the long process of relationship-building and foster community.

In the end, Robinson is making a profoundly traditional suggestion about sexuality, because what he proposes is rooted in genuine personal responsibility. He writes: “Many would object that what I have proposed would not give a clear and simple rule to people. But God never promised us that everything in the moral life would be clear and simple. Morality is not just about doing right things; it is also about struggling to know what is the right thing to do. ... It is about taking a genuine personal responsibility for everything I do.”

It is important to note that Robinson issued his challenge at the Seventh National Symposium on Catholicism and Homosexuality, sponsored by New Ways Ministry, an organization for gay, lesbian, bisexual, transgender and questioning Catholics and church personnel ministering to them. As Robinson so clearly points out, this new way of looking at heterosexual acts “will inevitably have its effect on teaching on homosexual acts.” That is a change long overdue.

Robinson’s take on sexuality -- that it deserves deeper consideration than the narrow, rule-bound approach that has evolved in Christian circles -- takes us to the heart of the radical approach Jesus took toward human relationships.

Pray for Peace in the Middle East

Behold the sun, the moon and the stars