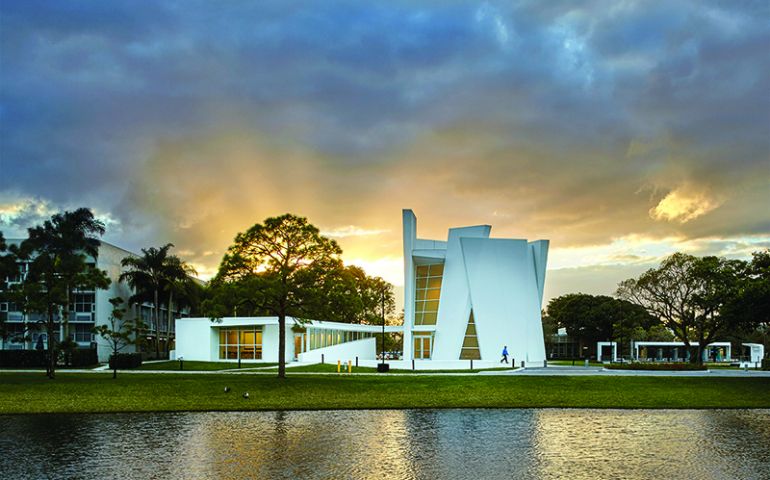 Boca Raton — Despite a well-documented drop in enthusiasm for organized religion among young people, many are still looking for avenues to spirituality that value dialogue, understanding, empathy and authenticity.

The recently opened Snyder Sanctuary at Lynn University in Boca Raton, Florida, is an architectural answer to facilitate this spiritual search, to help people of all backgrounds find common ground and to inspire them.

This pristine, white space with its polished concrete floor and filled with natural light is defined by seven tall walls that spiral around a center point, reinforcing the idea of “centeredness,” of balance, of repose.

The concrete walls create a chamber permeated by channels of light — direct and luminous — that trail through the space and across the planes that contain it throughout the day. These channels of light are admitted through slivers of space between the walls.

At night, the channels transmit the illumined interior, visible from across the campus and an adjacent thoroughfare, a beacon that cannot help but communicate hope. For millennia within the world’s spiritual architecture, light has represented the presence of the deity, as well as truth itself.

The walls of the Snyder Sanctuary both literally and symbolically lean upon each other, providing a web of support among the ensemble of planes. These concrete planes were lifted into place; the sanctuary construction embodies the value of uplift, of elevation.

The metaphor is profound: We all need to help support each other (particularly in times of weakness or doubt); we are stronger when we work together. Here, the architecture exhibits a certain tenderness, inviting us to see “the other” as a potential ally — a brother and sister. Sometimes we are strong enough to take another’s burden, other times we seek the reinforcement of our fellow human beings. Within the bearing of one upon the other, we find the human spirit at its most powerful.

The geometry of the spiral implied by the sanctuary’s interior also touches something very deep and timeless. The spiral is the path of harmonious growth. In fact, certain proportional systems in art and architecture actually follow those found within the structure of the natural world, such as the interior of the chambered nautilus, or the pattern of how the seeds on the face of a sunflower grow. Studies have shown that this sequence of proportions (the Fibonacci series) resonates deeply inside human beings around the world, in all cultures. The very geometry of the spiral is found in interstellar space as well as at the atomic level.

The Snyder Sanctuary’s spiral geometry connects it to a great web of being, found throughout our universe. The sanctuary also has architectural precedents, very ancient ones, such as the circular Stonehenge in southern England, one of the oldest sacred sites in the world. Yet, Snyder does not contain traditional religious symbols. It relies instead on light, color, planes and space to inspire and to create an aura of the spiritual.

The yin to the sanctuary’s yang is a labyrinth inscribed in the ground right next to it. Labyrinth patterns are found in cultures all over the world, going back to prehistoric times. They can symbolize growth, the seasons and the human journey through time and space. Many of the world’s religions have used the labyrinth as a form of prayer, a meditative amble, where one can journey alone or with others, during the walk coming close to each other at times and then moving far apart. The labyrinth is a geometrical allegory for the path through life, but it is not a maze (as life at times appears to be). Walking the labyrinth is a walk of faith, following a path through what might appear to be aimless treading, trusting that, with faith, you will arrive at the center.

Through light, space, materials and geometry, the new Snyder Sanctuary recalls some of the timeless architectural qualities that have marked sacred places around the world for thousands of years. It is a new sacred space, a spiritual place for a new generation seeking understanding and acceptance.

Spirituality | A new kind of sacred space on campus