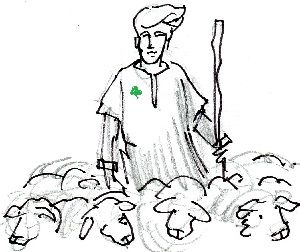 “If they will not listen to Moses and the prophets, neither will they be persuaded if someone should rise from the dead” (Luke 16:31).

According to legend, when St. Patrick was 16, he was kidnapped and taken from Europe to Ireland by raiders and there enslaved to care for sheep. After six years, he escaped to the Continent, but then returned to Ireland and became its patronal saint and the founder of the Irish church. To anyone who had known him as a slave, meeting him again back in Ireland would have seemed like meeting a ghost. Why return to a place where you had suffered the loss of your freedom? As the story went, Patrick had a dream in which he heard unborn Irish children crying out for him to return.

Today’s Lucan story of Lazarus and Dives ends with the words, “They would not be persuaded even if someone rose from the dead.”  The persuasive power of St. Patrick must have been great indeed. For Luke, the story of Lazarus conveyed the tragic failure of the rich to be moved by the resurrection of Jesus. The rich man spent his entire life ignoring the poor man at his doorstep, so why would be repent?  The gulf he built between himself and the poor became the gulf that would exist between him and Abraham at his death.

Luke’s story is the possible basis for the account in the fourth Gospel for Jesus’ raising of the dead Lazarus, which did not win over many of his enemies.  Jesus was consigned to the cross by the wealthy Sadducees who did not believe in resurrection. Only in an afterlife would they discover what they had surrendered, like the five brothers in the story.  They had sealed their fate by living comfortably in the midst of the poverty of others. Lazarus became the witness to their folly.  How many others in history have gambled away their chance at eternal life by living here only for themselves?  The rich knew the Scriptures yet ignored their call to life and love and for its many warnings about neglecting the poor.

Lent is our chance to take seriously the invitation of the Scriptures to live with an awareness that the path to God confronts us with the needs of others. How can we say that we love God, whom we cannot see, if we neglect those around us whom we can see? We join in prayer for the victims of the war in Ukraine, where the path to life is both stopped and flung open by the violence.

To be a rock of faith, we must let our thinking be changed