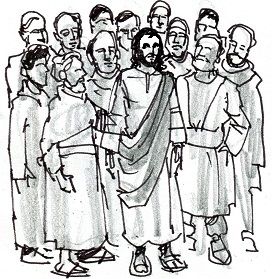 The Liturgy today commemorates two of the Apostles, Philip and James. We know very little about them apart from the New Testament. The Twelve count was a way to say that Jesus represented the New Israel as leader of the twelve tribes, but the Apostles’ most important role was as witnesses to the resurrection. When Judas was replaced, the criteria was for someone who had been with Jesus from the baptism of John to the Ascension.  Paul, of course, did not know Jesus of Nazareth but had encountered the crucified and risen Jesus, the essential Christ of faith preached by all the Apostles.  The women were clearly the first Apostles, privileged, faithful witnesses to the death and resurrection of Jesus.

Philip asked the obvious: “Show us the Father,” eliciting Jesus’ response, “Have I been with you this long and you still do not know me?” Jesus Christ was himself the key witness that sustained the early church, present to its members in the Eucharist, the Scriptures and through his Holy Spirit.  Believers who kept the faith did so because Jesus entered their lives intimately and enabled them to experience a personal transformation as Christ-bearers, dwelling places for the Trinity, living witnesses to the Incarnate Word, human beings transparent with God.  Every believer is invited to have a lively sense of the presence of Jesus in the world.

Film director Alfred Hitchcock insisted on appearing in all his films as a passerby, a cameo in the corner, an extra in disguise, but identifiable to fans who search for him. He is a model of familiarity we may all recognize some day when we meet Jesus in eternity and realize that we have seen him often, a surprise visitor who appears and disappears in ordinary moments with a wink and a nod to encourage us.  “I have been with you every day, and still you do not know me?”

The Gospels describe the call of the Apostles as occurring when Jesus looks at them and they know he is looking into the depths of their being, who they are but also who they will become.  Peter falls to his knees, knowing Jesus has seen how sinful and weak he is. Jesus lifts him up and chooses him anyway. Matthew is called from his despised tax booth in a moment Pope Francis relates to his own vocation as being “mercied and chosen.”   We are rescued from the long loneliness of human isolation, fully known, loved, invited to accompany the One who promises us a full human life with a divine destiny.  Who can turn away from this kind of love?

Saints Philip and James, either Alphaeus, Zebedee or the brother of Jesus, have their spot on the calendar. But we are all called to be witnesses to Jesus. Each day holds the look of love for us, the knowledge that someone is watching us, encouraging us, helping us to see God in ourselves and in all things.

Column | Always with you

Who are we to judge?

Pope at Angelus: Christians choose fidelity to Gospel over hypocrisy

Healing from the deaths of loved ones