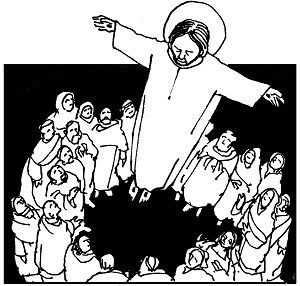 Ascension of the Lord

It has been almost 20 years since the small midtown parish I now belong to was told to close its doors for lack of members, money and ministry. A once vibrant parish surrounded by a supportive neighborhood had fallen victim to the broader pattern of Catholic flight to the suburbs, where new parishes were being built to serve the needs of more upscale but less diverse populations.

A group of parishioners went to the bishop to ask for time to show the viability of their church and the importance of its presence at that location in the city, where the needs were great. They gathered to pray for discernment during the week between the Ascension and Pentecost, using the text in today’s Gospel in which Jesus tells his disciples to “remain in the city until you are clothed in power.”

That pivotal moment led to the gradual revival of the parish, which grew to serve many young families and an international community comprised of some 25 countries of origin, a truly “catholic” expression of the world church and a model for lay leadership, good liturgy and effective social outreach. Though we find ourselves struggling again after Covid and other issues today, I will always remember the surge of confidence that came into the community then because of our time of prayer in the midst of a crisis.

The readings for the Ascension of the Lord focus on the theme of departure and return. Jesus ends his earthly sojourn with the promise that the Holy Spirit would animate his disciples to be his continued presence in the world and in history. Two key aspects of this transfer of power and mission stand out in Luke’s account of the Ascension in Acts and in his Gospel. Both have to do with how and where to find Jesus at work after his departure.

First, they are not to build a shrine or remain focused on his point of leave-taking.  Jesus is not disappearing into heaven, but going on ahead of them into the world, where they will find him.  Luke makes this clear after Jesus’ resurrection when the angels at the tomb tell the women to tell the Apostles that the risen Christ has gone before them to Galilee where they will see him. Or, in today’s Gospel, Jesus tells them to “remain in the city.”

Second, after the Ascension, the Acts account has messengers confront the Apostles who are gazing up into the clouds” “Men of Galilee, why are you standing there looking up at the sky?” There is work to be done. Return to the city and wait there to be clothed in power by the Holy Spirit. Where will they find Jesus now?  Matthew 25 makes it clear that Jesus is now waiting in the poor to be served. He is present and active in every faith community, in the sharing of the scriptures and in the breaking of the bread. He is present in the baptized members of his body, sent to continue his redemptive mission and to witness to him in lives of love and service.

With the Ascension we now enter the same interval of prayer and discernment to await the promise of Pentecost. We have a week to wonder what it could mean for us to fully welcome the power of the Holy Spirit into our lives.

We live in a world torn by trouble and division both inside our county and in the geopolitical framework of nations and economic dependency. Fear and distrust have infected our political and social media. Yet, Jesus tells us that fear is useless and doubt only paralyzes us.  The promise of Pentecost calls us to gather instead of scatter, to unite to support the common good instead of harboring in separate ideological camps set against one another.

Pentecost was a new Creation signaling the end of an old, tired world of conflict and injustice. Are we ready to begin again with God’s help to do the work of building a better world? Are we ready for an earthquake of change, a mighty wind of purpose and the fire of renewal?

We pray: Come, Holy Spirit, fill the hearts of your faithful and kindle in us the fire of your love.

Acceptance of inferiority and the freedom it brings

To pray as Jesus did