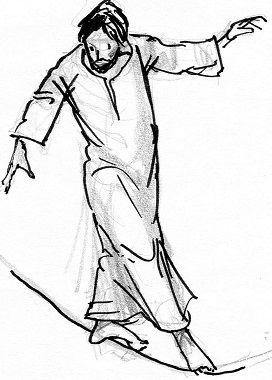 “Jesus was led by the Spirit into the desert to be tempted by the devil” (Matt 4:1).

The story of Jesus’ temptations in the desert recapitulates the story of the Israelites in the desert during the 40 years with Moses after the Exodus. They worshiped a golden calf, grumbled for bread and lost faith in God’s providence. Their failure to be faithful is replaced by Jesus’ obedience under assault from the devil, up to his old tricks trying to seduce him with bread, miracles and power.  The Gospel accounts also served as a warning about Satan’s efforts to undermine the early church with promises of riches, status and worldly power.  History reveals just how real those temptations were as the primitive church evolved after Constantine into Christendom, beset by wealth, power and ambition.

Jesus’ standoff with Satan was over a basic discernment about what kind of messiah he was to be.  After the theophany at his baptism and the thrill of being called “Beloved Son,” Jesus is led by the Spirit into the Judean wilderness to contemplate how he will carry out his mission. The temptations Satan proposes with scriptural citations are counsels about how Jesus can succeed as messiah.  Feed people as Moses did with manna in the Sinai, lead with spectacular signs, reform the world with worldly power.  It was a brilliant strategy, evil appearing as good, surrender disguised as wisdom.

But Jesus also knew the Scriptures, especially Isaiah’s mysterious songs about a suffering servant who would offer his life to restore the image of God to a fallen world, and these were already claiming Jesus’ identity and shaping his message of servant leadership and self-emptying love. Knowing he was defeated, Satan withdrew to wait, as St. Luke’s account adds, for an “opportune moment” to tempt Jesus again. Jesus fulfilled his mission on the cross and by his resurrection, but Satan’s intent has always been an open-ended gambit to subvert servant leadership in the church. Among worldly rulers, moral failure and political corruption often seem like the rule rather than the exception.

Lent invites us all into the desert to be tested in order to know our need for grace in crisis.  As Alexander Solzhenitsyn wrote, “The line separating good and evil passes through every human heart.”  We all know the lure of forbidden fruit and have imagined the lines we might cross if the price were right. Heroes falter and ordinary people quietly compromise, each step into sin a little easier than the one before.   Now is the time to pray for insight and courage to be ready when God asks us to step into the breach, to be faithful to the last.

This is just the first Sunday of Lent. Now is the opportune moment to turn our backs on Satan and set a firm course for Holy Week.

For Lent, read the Gospel, fast from gossip, pope says at Angelus

The God of the living