I call you friends 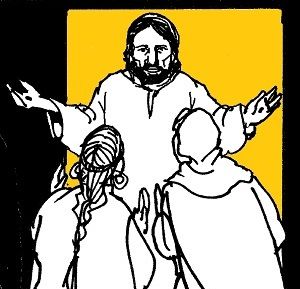 The long history of images for God clearly reflects anthropomorphic projections from nature and human character. God was the source of weather and fertility, and religion was about appeasing divine power to get favorable outcomes.  The biblical poets and prophets presented God as an emerging revelation of the transcendent Other who was also intimately involved in the story of Israel. God was Creator, covenant maker, lawgiver and guide for the nation on pilgrimage through history. God was ineffable, nameless and beyond human control and therefore an object of awe to be obeyed and worshiped.

Jesus’ familiarity with God as not just Father but as his personal Abba must have disturbed religious leaders who saw his message of unconditional love and unlimited mercy as a threat to their roles as mediators and gatekeepers.  Jesus’ emphasis on love over judgment was heightened to the level of blasphemy when his followers began calling him not just a messenger from God but the visible manifestation of the invisible God, the Lord and divine Son of God.

Today’s Gospel passage elevates human access to the ineffable mystery of God even more by calling it friendship, an encounter with Jesus that is both intimate and mutual. As Jesus knows the Abba, so he opens his own relationship to the disciples not as Lord to subjects or Master to servants but as friends. Everything the Father has revealed to the Son is now revealed to them. The union of divinity and humanity implied by the Incarnation is now shared with them in friendship.

The message of the Council of Jerusalem was essentially this same expanded access to God to potentially every human person. The barriers placed by religion between people and God are removed.  Everyone is a member of the Chosen People, having universal and unmediated intimacy with God, whose love has called us into existence and loved us unconditionally simply because we are human beings.  This is the Gospel of divine life, revealed by Jesus, who bridged divinity and humanity by his Incarnation.

Jesus concludes this astonishing teaching with the words: “It was not you who chose me, but I who chose you and appointed you to go and bear fruit that will remain” The fruit we have been sent to share with the world is that we are all more wonderful than we can imagine. God has freely chosen us to be part of the Beloved Community that begins now in this life and will be fully revealed in the life to come.

Column | I call you friends

Hello, I must be going

An Advocate is coming

The Epiphany of the Lord: Gospel to all the nations