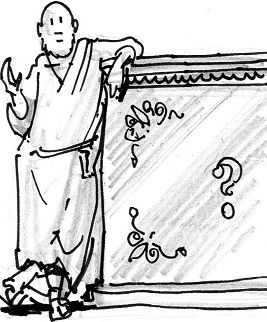 The threshold from reason to faith is perhaps the most difficult one to cross for an intelligent and naturally skeptical mind. Aquinas saw theology and philosophy as pursuing the same reality but knew that logic has its limits and the passage to faith, especially Christian faith, involves a gift that, once accepted, can be explored by human understanding.

No one confronted this threshold as directly as Paul when he arrived in Athens, the cradle of Greek philosophy. Paul took pride in his classical education and rhetorical skills. So, when he went to the Aereopagus, a rocky hill where the high court met amid shrines to various gods, he saw his chance to preach the Gospel when he found an altar dedicated to an “Unknown God,” (revealing, perhaps, how smart the Greeks were to cover all their bases in matters of religion). Paul waxes eloquent in support of natural religion, the logic of unseen powers holding the universe in order. But as he speaks of a man named Jesus, crucified and risen from the dead, his listeners dismiss Paul as just another street preacher.

Paul’s subsequent letter to the Corinthians seems to indicate that he was stung by his failure to impress the sophisticated and skeptical deep thinkers in Athens. He abandons any pretensions to eloquence and embraces the mystery of the cross of Jesus as a “scandal to Jews and as foolishness to the Greeks” (see 1 Cor 1:20-24). He further downplays any wisdom on his part, saying that only by the Spirit can anyone grasp the “wisdom” of the crucified Christ. Paul is so adamant that no human persuasion can convey this wisdom that he even seems to suggest that he has a speech impediment of some kind in order to show that whatever success he has had as a preacher was purely the work of the Spirit.

The human search for truth is, of course, more than intellectual. Life experience of both joy and sorrow, gain and loss, and ultimately the inevitability of death, are the real teachers that invite the mind to proceed from logic and reason to art and faith, and finally to the choice whether to see life as culminating in despair and disintegration or in hope of some deeper mystery beyond death. Paul preached what he experienced – life in Christ, here and hereafter. This the promise we cherish as we approach Pentecost with our whole hearts and minds.

Let's pray to rise above our culture of so many things

Where do we go from here?

Pope hails as heroes parents who risk everything for their kids