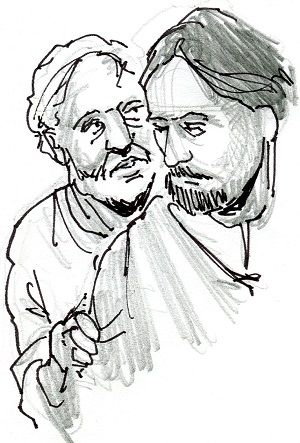 There are few jokes in the Gospels, but we don’t need to read between the lines to sense that Jesus was smiling when he told his disciples what was in it for them.  Peter, usually put forward by the group to ask awkward questions, makes the case for a big payout at the end for all the sacrifices they have made: ‘We have given up everything and followed you.”

Jesus answers by listing in detail these deprivations: “House or brothers or sisters or mother or father or children or lands!” We know that the first four disciples were fishermen who walked away from their boats, their families and future income to accompany Jesus on his miracle tour of Galilee. Matthew gave up his lucrative tax booth, others their livelihoods and families. At this point in the Gospel, they are on their way south to Jerusalem and just beginning to sense the uncertainties that lie ahead.

Emmylou Harris has a song, “Jerusalem Tomorrow,” that capture the quid pro quo of the disciple’s questions about the cost-benefit ratio of their decision to follow Jesus.  In the song, another would-be disciple is impressed with Jesus’ style and hopes to cash in on his popularity.

The disciples must have been reassured when Jesus, still smiling, said they were going to get it all back one hundredfold, adding a hint of the true cost of their commitment.  This largesse would not be without trouble —persecution – on their way to eternal life.

We know from the rest of the story that the disciples were entering the paradox of their lives. In Jerusalem, Jesus would face rejection, trial and execution on a cross. His disciples would go through a wrenching rebirth of faith to carry his message into a hostile world, not without success and filled with the joy of total service to a mystery so much bigger than they could have imagined. Think of a newly ordained snapping on his collar and imagining his first parish, then finding his maturity and meaning in the challenges of caring for 500 families, a school struggling to stay funded, the complexity of real world problems facing him on all sides.  Think of any conscientious Christian wondering about the value of his or her service at a time of frustration and doubt.

Is it worth it?  Jesus’ response is to look at us with eyes that know our hearts, our desire to follow him without knowing all that will be asked of us. Would we have begun the journey if we had known the full cost?  Yet, “To whom shall we go?” Peter will answer this question later for all of us. “Lord, you have the words of eternal life.” (John 6:68).

Will there be miracles today?

Editorial: The Incarnation is both pure grace and a work in progress