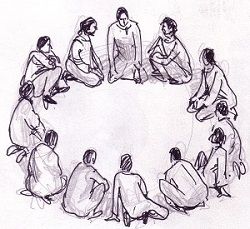 “Jesus summoned the Twelve and began to send them out two by two” (Mark 6:7).

Jesus’ decision to send the Apostles out in pairs shows his understanding that evangelization is a communal effort. As much as the message, the example of messengers working together was essential to the growth of the early church. Jesus also made the Apostles totally dependent on the people they were sent to preach to.  Open doors and hospitality were another way that the message created community.  The Gospel took hold by the witness of love and the signs of healing and spiritual freedom that occurred in every house that welcomed them. As the church grew, what would be affirmed at Antioch was that its success in attracting members was the witness of Christians who loved one another.

Without community, a group can have structure, ritual and programs and still not come alive in the Gospel. A real network of relationships is the foundation for a sustainable, viable faith community.  Even without official status and formal support, faith communities have been known to flourish as long as there was community.

One example of this was the survival of a small underground church for 250 years after Japan expelled Western interests and martyred Paul Miki and his companions in 1597. With only the sacrament of baptism and devotional practices, the laity kept their faith alive for generations until Japan again opened its borders in 1865. Without clergy, hierarchical direction or formal celebration of the other sacraments, people lived out their baptismal identity in community.

This offers some perspective to the question considered at the Amazon Synod and in the summary document Pope Francis will promulgate soon, namely about who can preside over faith communities in circumstances of pastoral need in the absence of clergy. Does the community’s right to the Eucharist and other sacraments depend on a specific, historically determined model of the priesthood, or are other models possible?

The strongest witness we know is martyrdom. The blood of martyrs is the seed of conversion, and we can attribute the endurance of the church in Japan to the memory of St. Paul Miki and his companions. We should also note the witness of missionary Sr. Dorothy Stang and other lay workers in Brazil for its impact on the Amazon Synod and its expected contribution to the universal church.