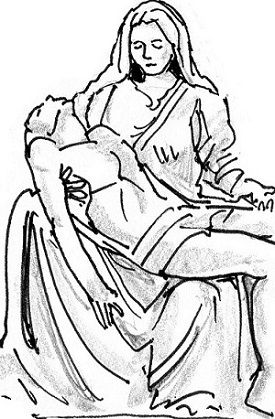 My memory of attending a Catholic grade school with Friday Stations of the Cross during Lent has its own soundtrack. It is the dirge-like melody of the Stabat Mater we sang verse by verse between each Station:

At the cross her station keeping, stood the mournful mother weeping, close to Jesus to the last.

The tune merges in my memory with a story told by author Scott Wright, who accompanied refugees during the civil war in El Salvador as they fled soldiers and helicopter gunships in the jungles, sharing their terror and witnessing their faith. He said the worst suffering of all is to stand by helplessly while someone you love suffers, comparing it to Mary’s suffering at the cross. She could not take Jesus down, only be there with him as he slowly died.

Today’s commemoration of Our Lady of Sorrows invites all of us to bring our most difficult moments together with hers, in hospital rooms, at deathbeds, after phone calls in the night, long-distance or intimate scenes when we stood helpless before the suffering of someone we loved.

Jesus’ role is central as both victim and dispenser of grace. His final hour on the cross was filled with redemptive power. He welcomed a thief into paradise, forgave his enemies and executioners, thirsted, prayed and surrendered himself.  In John’s Gospel, he also entrusted his mother to the disciple he loved and gave him to her as her son.  Mary’s role as mother is expanded to hold every disciple, each of us now being carried and pondered in her heart, broken by suffering to contain an infinite store of love.

Growing up Catholic includes for many of us the practice of saying the rosary, a ritual that has come in and out of my life. I recall hearing my aging parents reciting it at bedtime while watching baseball, counting their blessings and losses inning by inning as they eased toward sleep.

As life comes full circle, it seems a natural way to take Mary into our homes, assured that she will be with us to the last.

In Colombia, bishops, religious listen to Amazonians before synod