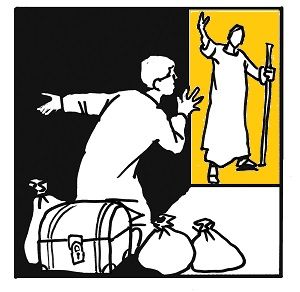 When Pope Francis said he envisioned a "church of the poor, for the poor," he was quoting his predecessor, Pope John XXIII, who expressed the same thought in 1959 before the Second Vatican Council. Perhaps the goal John had in mind by convening Vatican II was to recover the authentic church of Jesus and the first Christian communities from beneath centuries of historical accretion and complexity that had produced an institution so wealthy and powerful that it was hampered from preaching the Gospel. Over 60 years later, Pope Francis, in word and gesture, and now in actual structural reforms, is still trying to do the same thing. One reason he chose the name "Francis" was to emulate and promote the poverty and simplicity of St. Francis of Assisi.

It will not be easy. The story of the rich man who asks Jesus what he must do to inherit eternal life  illustrates the challenge of any conversion that involves letting go of wealth to find God. The man has kept the commandments. He is confident of his efforts to avoid sin. He is rich in virtue and discipline. He has refrained from the obvious violations of piety and social harm, but he wants to do more. He wants to be perfect.

But, when Jesus says, "Go, sell what you have and give to the poor and you will have treasure in heaven," the rich man goes away sad.

Renounce my inheritance? Give up my money and the power that goes with it? What of my financial acumen and philanthropic spirit that could do so much good for the poor? Why throw away everything to join a band of fishermen and other no-accounts following a charismatic preacher to Jerusalem to save the world?

Even the look of love in Jesus' eyes is not enough to tip the balance in the man's heart from wealth to wonderment.

Each of us has a chance to enter today’s Gospel with the same desire to find and follow Jesus. We all have a chance to travel lighter and do what we can to help others. In return, Jesus promises us more freedom and peace of mind than we can imagine. Faith is won by saying yes or lost when we can no longer imagine what might have been.

Third Sunday of Lent: We thirst

In the stars: an epiphany story

Miracles in store for us