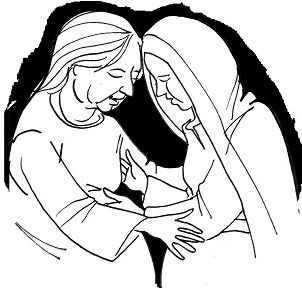 "Blessed are you who believed that what was promised to you by the Lord would be fulfilled (Luke 1: 45).

Luke is sometimes called the Gospel of Women. More women appear in Luke than in the other Gospels and their prominence brings their point of view and themes into the story of Jesus, his parables, the women he healed, his advocacy for widows, and the support women gave him in their role as witnesses and evangelists. They are often the only ones who really understand Jesus, and they remained faithful to him to the end.

Luke’s infancy narratives remind us that the promises made to barren Sarah and the mothers of Samuel and Samson were fulfilled with Elizabeth’s pregnancy. Mary’s visit to Elizabeth recalls the bringing of the Ark up to Jerusalem and David’s royal dance when John leaps for joy in his mother’s womb. The embrace of these two pregnant women confirms the joyful fulfillment of the story of salvation. The essence of the Gospel is first announced in the secret and anonymous places occupied by women in a largely patriarchal narrative.  God is among us. God’s promises are being kept.

Mary’s canticle is a song of praise, but it cannot keep from overflowing with the preoccupation of women that justice be done, the abuse of power and the deprivations inflicted on the poor and hungry be confronted and all suffering be accounted for.  The proud in their conceit will be scattered. Those who sit on thrones to plan and profit from the wars that displace families and terrorize children will be pulled down. Those who starve whole populations to gain some strategic advantage will be sent away empty. Indignation, it has been said, is the strongest form of love.  It drives the Magnificat.

Luke tells us that Mary pondered every experience, knowing its precise weight as she turned it over in her heart. What only women know, the gestational unfolding of the most precious and vulnerable guarantee of our future, is both cause for joy and anguish.  When Simeon took the child in his arms in the temple, he prophesied that Jesus would be a sign of contradiction. He then told Mary that her heart would be pierced as she accompanied her son.  She would bear the full measure of these words when she took her place among the other women at the cross.

Belief in justice is what holds history together, and this means that God, who is just, will make things right. Women were the first witnesses to the resurrection because they would not let go of Jesus. They believed that love was stronger than death.  They believed that what was spoken to them by the Lord would be fulfilled. The Visitation celebrates the passing of this faith from one generation of women to the next. God keeps promises. God hears the cry of the poor. God answers prayers. Luke knew that without the women there would be no church.

Pat is the former editor of our sister publication, Celebration, and he also served as NCR cartoonist. After retirement in 2016, Pat continues to contribute to NCR with his Francis comic strip and Pencil Preaching. Contact him at patrickmarrin@gmail.com