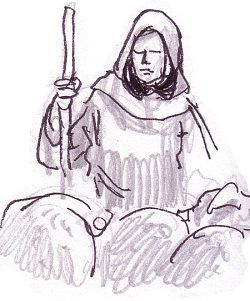 The confrontation between Jesus and the unclean spirit in the synagogue in Capernaum is writ large in today’s Gospel.  Jesus and his disciples have crossed the sea during a violent storm as Jesus slept in the boat. Roused by his terrified disciples, he shows his mastery over nature by calming the storm. As they land near the town of Gerasa in the pagan region on the other side, they are met by a violent, deranged man possessed by a legion of unclean spirits.

If the first exorcism showed Jesus’ power over evil in Galilee, this one demonstrates his universal dominance over all evil spirits. In provocative detail, Mark adds a more political dimension to the story by having Jesus drive out a huge number of spirits, the equivalent of a Roman legion in a place under imperial control and cultural influence. The production of pork, raised by local herders for export or consumption but considered unclean by Jews, is the setting for Jesus’ show of power.

Some scholars suggest that Mark wrote his Gospel for a community of Jewish Christians in Galilee in the decade before the Jewish-Roman war. This catastrophic event altered the landscape of history for both Judaism and the early church. Mark emphasizes Jesus’ efforts to avert the war between the zealots and Rome that destroyed Jerusalem and the temple, killed over a million people and drove much of the indigenous population from the region. Today’s Gospel reflects the rising tensions between messianic movements and the Roman occupation, a collision course Jesus sought to resolve nonviolently.

After the exorcism, which results in the drowning of the swine (an allusion to the fate of the Egyptian army in the Exodus story?) the local people ask Jesus to depart. They are awestruck by his power, but this clash of spirits threatens their livelihood and existence as a Roman outpost. The chained demoniac living among the graves is a symbol of their own imperial captivity, but they are not ready to align themselves with the spirit of Jesus. The healed man begs to leave with Jesus, who orders him to remain to evangelize the region.

Does this strange story offer any parallels for us as we witness cultural and ideological tensions that are now threatening our technologically advanced world?  Who could have imagined that mass media, for all its benefits, could also create separate loyalties so intense that cooperation and dialogue seem impossible?  Legions of citizens, families and even churches seem divided into camps accusing each other of harboring “unclean spirits.”  This occurring during national economic and health crises does not bode well for easy solutions.  It does call us to a season of extraordinary introspection and prayer for wisdom and courage to seek common ground and commit to the work of reconciliation as the essence of the Gospel Jesus proclaimed and gave his life to bring to birth in our world.

Column | We are legion

Acting on the word