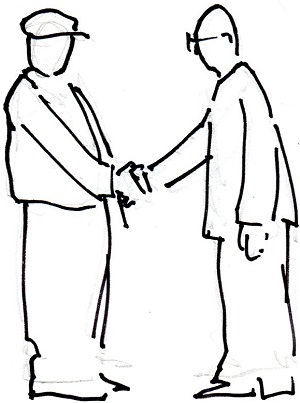 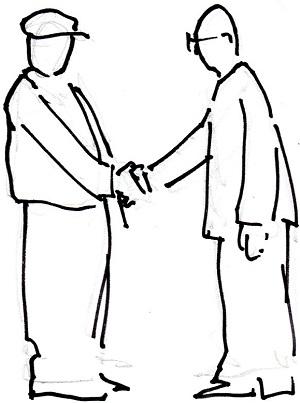 Pencil Preaching will take a short break after this column.   Be back later in July.

“The crowds were struck with awe and glorified God who had given such authority to men” (Matt 9:8).

When Jesus healed a paralytic, a spectacular miracle, his critics found something else to complain about because Jesus had also told the victim that his sins were forgiven.  In effect, he joined the physical healing to the spiritual one as a sign that he had the authority to do both.

The scribes murmured, “Who does this country preacher think he is? Doesn’t he know that only God can forgive sins?

Jesus hears their thoughts and makes an astonishing claim even more dramatic than their objection about him personally. By using the title “Son of Man,” Jesus may have been saying simply that human beings have the power to forgive sins.

If God is all forgiving to begin with, most offenses have little to do with God but are failings within human relationships. Who better to forgive than ordinary people seeking to restore peace within families and with their neighbors? Jesus affirms this authority given to people.

The reason the scribes objected so strenuously to this was that it undercut their role in mediating human forgiveness from God. They were self-appointed confessors and judges who assigned penalties for sin. They controlled access to God and decided what fines and ritual sacrifices appeased God’s anger at sin. They were the official gatekeepers who decided who was in and who was out.

If people can do all of this themselves to make peace with God and one another, then the scribes were out of a job.

There is no question that sacramental forgiveness from a priest as representing God and the community can be enormously reassuring to those seeking healing and forgiveness. But even where absolution is given, the real work of reconciliation must be done by the penitent. Ritual must be followed by reality, and those who have offended others know that it takes more than confession to heal a relationship or make peace with a sinful past.