What kind of fool? 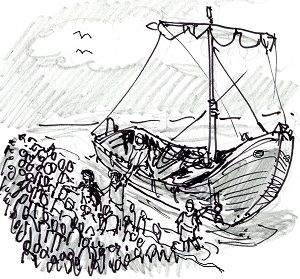 The 1962 song “What Kind of Fool Am I?” from the musical “Stop the World, I Want to Get Off" is the lament of a man who never fell in love. His was the foolishness of someone who could not surrender himself to the mystery of life nor cross the threshold beyond logic to find something bigger and deeper than himself.  It was one kind of foolishness that leads to cynicism and regret.

There is another kind of foolishness, and this is for those who do fall in love, who risk everything to surrender to life. In today’s first reading, St. Paul urges believers in Corinth to become fools for Christ, defying the so-called wisdom of this world that counsels us to save ourselves rather than lose ourselves in the service of God and others. We heard echoes of this foolishness in last Sunday’s cry of Jeremiah that he had been duped and had let himself be duped to take up God’s word, which was like "fire in his bones” (Jer 20:9).

In today’s Gospel, Peter first surrenders his boat to Jesus, who sits in it and teaches the crowds on the shore; Peter then surrenders his better judgment when Jesus tells him to pull out into deep water for a catch when they have already fished all night and caught nothing.  He has come this far, and when Peter witnesses a miraculous catch of fish that nearly sinks their boats, he is himself caught by the mysterious presence of Jesus. He leaves behind his livelihood and the wisdom of this world to follow him.

What did Peter experience? The story implies that his encounter with Jesus is both divine and human. The miraculous catch is a theophany, a glimpse of God, and Peter’s realization that Jesus can see into his soul, including his sinfulness, is so disconcerting that he drops to his knees and begs him to depart from him. Jesus knows him and even more, loves him and wants him to accompany him on his mission. Like Jeremiah, Peter’s heart is on fire and he cannot turn away.  He will be one of God’s fools, ready to give his life to find it again in Jesus.

We cannot stop the world to get off.  Despite its tensions and tragedies, our own failures and disappointments, we are here as part of the problem or part of the solution. Jesus is offering each of us a chance to make our time on this earth make a difference.  We are being called to put out into deep water to lower our nets for a catch. The same love that has captured our hearts compels us to capture others. We are called to be the difference between Chaos or Community, Dr. Martin Luther King Jr’s last book before his assassination. Here is our chance to be fools for love instead of fools who failed to love.

Column | What kind of fool?

The core message of the Gospel is that God loves us

In God we trust