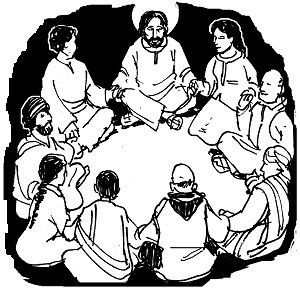 The placement of the Book of Ezra as historical background to today’s Gospel passage from Luke can help us understand why Jesus’ transcendent loyalty to God’s word as the basis for the identity of his followers was so challenging for his Jewish contemporaries.

Jewish blood and obedience to the Law and rituals of Israel were the distinguishing qualifiers to be part of the Chosen People, the family of God. The Book of Ezra described the commitment to strict observance in the post-exilic period after the people returned from Babylon. Persian kings Cyrus and Darius defeated Babylon and were directed by God to restore the Jews to their homeland and to assist them in rebuilding Jerusalem and the temple.

Stung by suffering and displacement, interpreted as punishment for their failure to keep the Covenant, the Jews were determined to insure that such a disaster would never happen again, so temple worship,  racial purity and tribal unity were mandated by the religious leaders, including the priests, scribes and Pharisees in Jesus’ time.

When Jesus’ blood relatives arrived to claim Jesus, it was shocking for him to send word that his disciples and anyone who heard God’s word and kept it were now his “mother and brothers.”  We can imagine the dismay of his family at this, but also the scandal this caused among strict adherents to the post-exilic codes found in Ezra. Jesus’ “liberal” views were not only heretical, they were destabilizing and dangerous for Israel.

The irony was that Jesus’ fidelity to God’s Word was more authentic to the Covenant than the legalism and obsessive liturgical focus of the temple establishment and religious elite, who kept the rules but failed to show mercy. Instead of protecting the security of Jerusalem, the purists were taking the nation toward an even greater disaster than the Babylonian exile. Before the century was out, the city and temple would be destroyed by the Romans and the Jewish nation would scattered to the four winds.

Only a living faith can save us, not ritual or tradition or blood identity. God’s dynamic law of love expressed in compassion, justice and service is how we will be known as disciples of Jesus.

Another historical irony with some bearing on the dangerous tensions being stoked in the Middle East is the fact that ancient Israel was restored after the exile by the Persians, the world power now known as Iran.

Column | What will keep us safe?

A road is a visible sign of a hidden unity

Turn it upside down