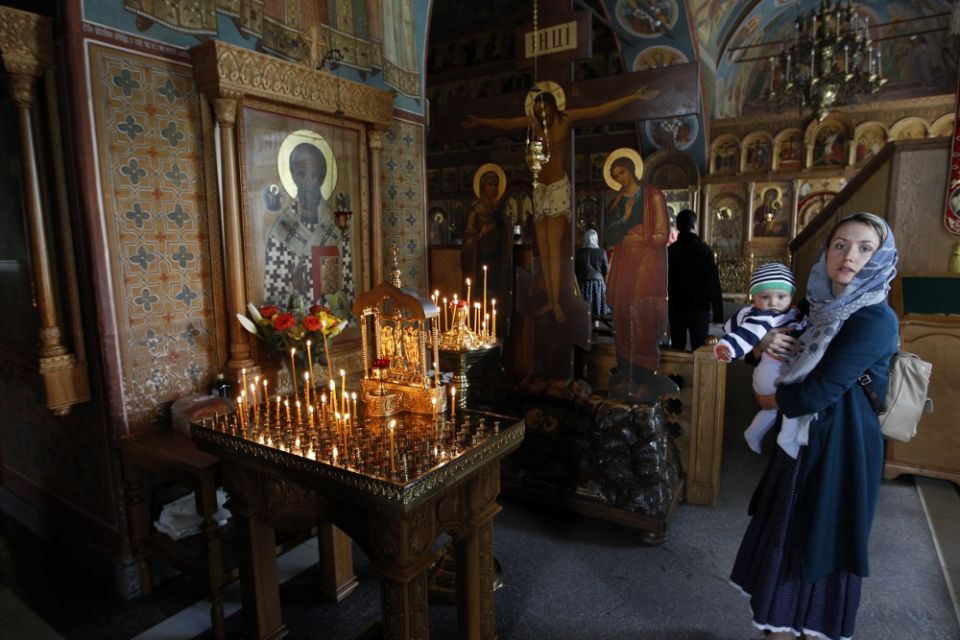 A young Russian Orthodox woman holds her child in a church at Optina Monastery May 27. (CNS/Robert Duncan)

Warsaw, Poland — When the centenary of the Bolshevik revolution falls this autumn, Christian communities across the former Soviet Union will commemorate the persecutions it unleashed upon them.

But they'll also recall the religious meditations born in the country's prisons and labor camps, some of which deserve to rank with the best in Christian history.

"Secular writers like Alexander Solzhenitsyn and Nadhezda Mandelstam may have become the most famous. But themes of witness and martyrdom also run through the gulag literature and are universally recognized and respected."

Though often viewed as an epoch of cultural and spiritual emptiness, Soviet rule produced profound Christian works of prose and poetry, offering vital reflections on a resilient faith.

Long before the turbulent events of 1917, the writer Fyodor Dostoevsky had foreseen where the destruction of religion would lead at the hands of Russia's new revolutionary class, whose communist ideals promised a "kingdom of freedom" on earth.

"The preachers of materialism and atheism, who proclaim man's self-sufficiency, are preparing indescribable darkness and horror for mankind under the guise of renovation and resurrection," Dostoevsky had written prophetically.

"They conceive of arranging things justly. But having repudiated Christ, they will end by flooding the world with blood."

The revolution's mastermind, Vladimir Lenin, had sworn to emasculate Russia's Orthodox clergy — those "agents in cassocks" who had been used by the Tsar to "sweeten and embellish the lot of the oppressed with empty promises of a heavenly kingdom."

But he was contemptuous of religion as a whole.

To call it the "opium of the people" was too kind, Lenin had written in 1909, paraphrasing Karl Marx. It was rather "a kind of spiritual rotgut, by which the slaves of capital blacken their human figure and their aspirations for a more dignified human life."

Even then, Christian believers were astonished at the cruelty shown towards them. "In childhood and adolescence, I immersed myself in the lives of the saints and was enraptured by their heroism and holy inspiration," the 48-year-old Metropolitan Venjamin of Petrograd confided to a prisoner before he was shot as an "enemy of the people." Venjamin had defended the Bolshevik regime's separation of church and state, protesting he was not against it.

"With all my heart, I sorrowed that times had changed and one no longer had to suffer what they suffered. Well, times have changed again, and the opportunity has arisen to suffer for Christ both from one's own people and from strangers."

Nadhezda Mandelstam, whose poet-husband Osip would die at a camp near Vladivostok, was haunted by the anti-clerical brutalities she witnessed in Moscow.

The very word God had become an "object of mockery," Mandelstam recalled, while the new possessors of "scientific truth" claimed god-like authority.

"Not only God but poetry, ideas, love, pity and compassion were hastily overthrown. We were to begin a new life without any nonsense," Mandelstam wrote.

"Christian morality — including the ancient commandment 'Thou shalt not kill' — was blithely identified with bourgeois morality. Everything was dismissed as a fiction."

"We do not serve, and do not wish to serve, any earthly power, for we are, like St. Paul, ambassadors of Christ," the French Assumptionist bishop, Eugene-Pie Neveu, told his congregation at Moscow's St. Louis church.

"Because we live among the great Russian people, which extends its hospitality to us, we in turn must feel gratitude and wish this people peace, prosperity and glory. Render unto God the things that are are God's, and unto Caesar the things that are Caesar's — that is our only 'politics,' the politics of the Gospels."

Neveu's conciliatory words carried little weight. Lenin's regime saw Christianity as a rival ideology, one which believed in the "inner man" when programmed efforts were being made to eradicate him.

"The faithful are still coming to church. Yet it is so sad to hear their laments, watch their tears, be taken into confidence about their shocks," Florent noted. "Why is God allowing all of this? … What can we do to remain faithful, when our families are dispersed, those we love exiled or deported?"

Such questions soon generated a substantial literature, and the conclusions were often bleak.

Polish deportees, returning from the "anti-space and anti-time" of the labor camps, admitted to losing their faith. While some had also found it, preserving a sense of self-worth, Christ's question on the Cross, "My God, why have you deserted me?" had been repeated many times.

Over 360,000 Poles had been deported thousands of miles east on cattle trucks between 1940 and 1941, when the Soviet Red Army occupied eastern Poland. They brought back stories of emptiness and desolation, of conditions where hatred and suspicion reigned, and bodies and spirits could be crushed within days.

Could any link with God be preserved when every physical and psychological weapon was being used to stifle God's voice forever?

The Polish Gustaw Herling-Grudziński had been arrested by the Soviet NKVD police as a student and sent to the camps on espionage charges.

His camp memoir, Inny Świat (A World Apart), published abroad in 1951 with an introduction by the philosopher Bertrand Russell, described how forced labor was used to create a new man existing "below the lowest level of humanity," deprived of memory, identity and dignity.

The old and sick were routinely killed by camp guards, Herling-Grudziński recalled, while others were shot during alleged escape bids, or left to die from cold and starvation.

"The certainty no one would ever learn of their death, or ever know where they had been buried, was one of the prisoners' greatest psychological torments," he wrote. "The barrack walls were covered with names of prisoners scratched in the plaster. Friends were asked to complete the data after their death by adding a cross and date." 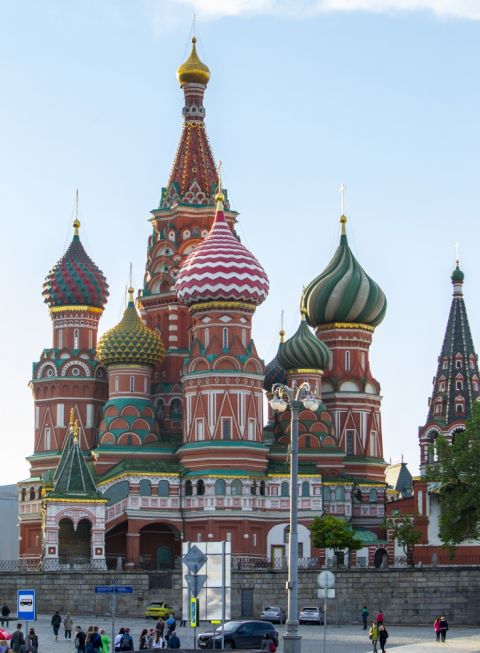 People walk outside Moscow's St. Basil's Cathedral May 25. The cathedral is one of the most iconic churches in Russia and is situated within the Kremlin, the Russian government's seat of power. (CNS/Robert Duncan)

Many prisoners, corrupted by suffering, lost any will to pray. After all, how could God have created a world that so radically denied him, in which virtuous people received no divine protection when struck down by the powers of evil?

But for those who withstood such pressures, Herling-Grudziński was sure, "faith in transcendence" provided a vital support.

Some camp inmates continued to live a religious life, even fasting and receiving the sacraments, and conserving their crucifixes and rosaries.

American Jesuit Fr. Walter Ciszek left Russia in 1963 as part of a "spy-swap" after 15 years' imprisonment and hard labor, making the sign of the cross through the plane window as he flew out of Moscow, the spires of the Kremlin in the distance.

Ciszek had been listed as dead by his order since 1947, and his fellow-Jesuits had said Masses for his soul. He was struck by the "timelessness and purposelessness" he had experienced, but also by the sense of divine providence.

Like the Israelites of the Old Testament, weeping in captivity by the rivers of Babylon, Christians like himself had pondered the age-old questions demanded of God in Psalms 12 and 13, at a time when "everyone utters lies to his neighbor" and "vileness is exalted among the sons of men": "How long, O Lord? Wilt thou forget me forever?"

In the end, Ciszek had seen the sufferings of Christians as a sign of God's love, as it had been to their biblical precursors.

Christians might ask why God had allowed such evil. But there had been persecution before, and the church had always been sustained by God. The fullest freedom always came from submitting to God's will.

"It dawned on me at such times how futile were the attempts of man or government to destroy the kingdom of God," Ciszek wrote later.

"You can close churches, imprison priests and ministers, even set men and churches to fighting among themselves, but you cannot uproot the good seed. … What was I, in comparison with the might and power of the Soviet government? What were any of us, really, in the face of the system around us, with all its organs of propaganda and powers of persecution? Yet, in God's providence, here we were — it was the place he had chosen for us."

Some Christian prisoners were shown kindness by their captors.

Lithuanian Fr. Alfonsas Svarinskas had served a 10-year sentence only to be returned to the camps in 1960, after just two years' freedom, for preaching "anti-Soviet sermons."

But he had encountered unexpected gestures. One Lithuanian KGB agent had given him a New Testament, while another had been demoted for passing on a food package at Easter.

Perhaps experiences like this, however rare, had helped sustain hope that the damage inflicted by communist repression might not be irreparable. 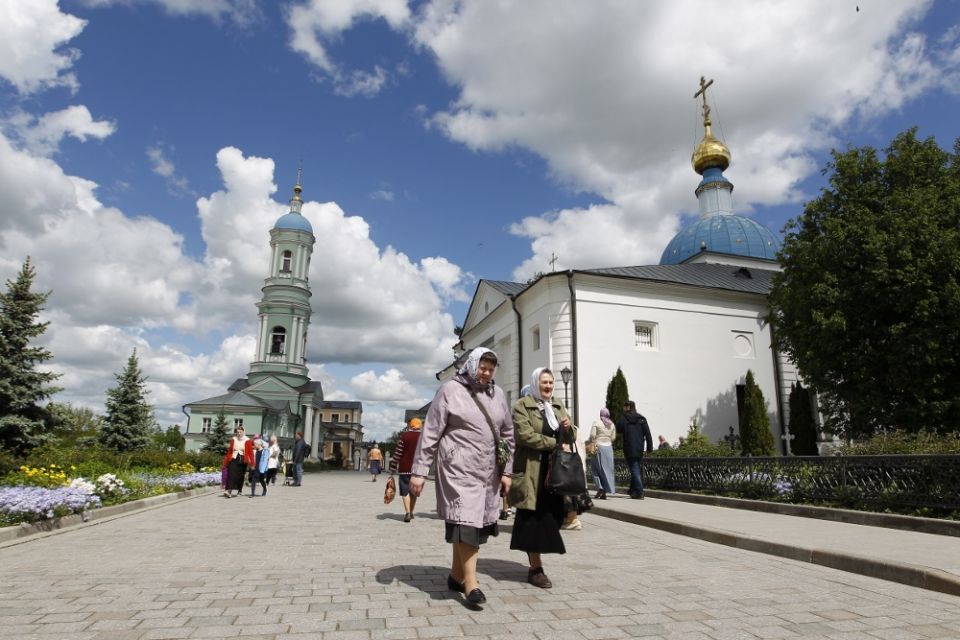 Optina Monastery, one of Russia’s holiest sites and a place of pilgrimage for Orthodox Christians, is pictured May 27. (CNS/Robert Duncan)

Lenin's system of rule had made it hard to live honestly, and even harder to aspire to goodness. That some did, by effort of will, was an important mark of redemption. The heroism and self-sacrifice of the few had compensated for the timidity and weakness of the many.

It would, in the end, be left to those who had suffered and survived to make sense of the 20th century's great persecution.

In Belarus, Cardinal Kazimierz Świątek left a modest account of his "long winter in Stalin's gulag," recalling how he'd used an old cup as a chalice and hidden consecrated hosts in a matchbox, as well as the camp commandant's surprise that a man on whom "there was no need to waste a bullet" had survived the fatigue and hardship.

With communist rule now over, however, Świątek saw a need for forgiveness.

"For most Catholics, it came as a surprise that this forgiveness could be offered by someone who still bore the marks of persecution on his own body," the veteran church leader told NCR many years later.

"Yet never, even when various sentences were passed against me, did I feel any desire for revenge. As people, we must forgive, remembering Christ's words: 'Judge not, that you may not be judged.' Over its 2,000-year history, the church has faced good years and bad, from the first centuries when they threw Christians to the lions, to the persecutions of the French Revolution and Stalinism. But it endured and will endure."

Msgr. Kovalevsky, the Russian Bishops' Conference secretary-general, thinks reflections like this will have a resonance for the revolution centenary. The Christian writings from the prisons and camps, he argues, should be viewed as key part of the church's heritage.

"In every historical period, we can find examples of martyrdom and heroism — and even today, Christians around the world are still dying for their faith," the priest told NCR.

"But these experiences, many in living memory, should occupy a special place in the context of church history. The witnesses and martyrs of the gulag should rank alongside those of Christianity's first centuries."

Survey: 133 percent increase in attacks on religion in past three years