The joy of turtles 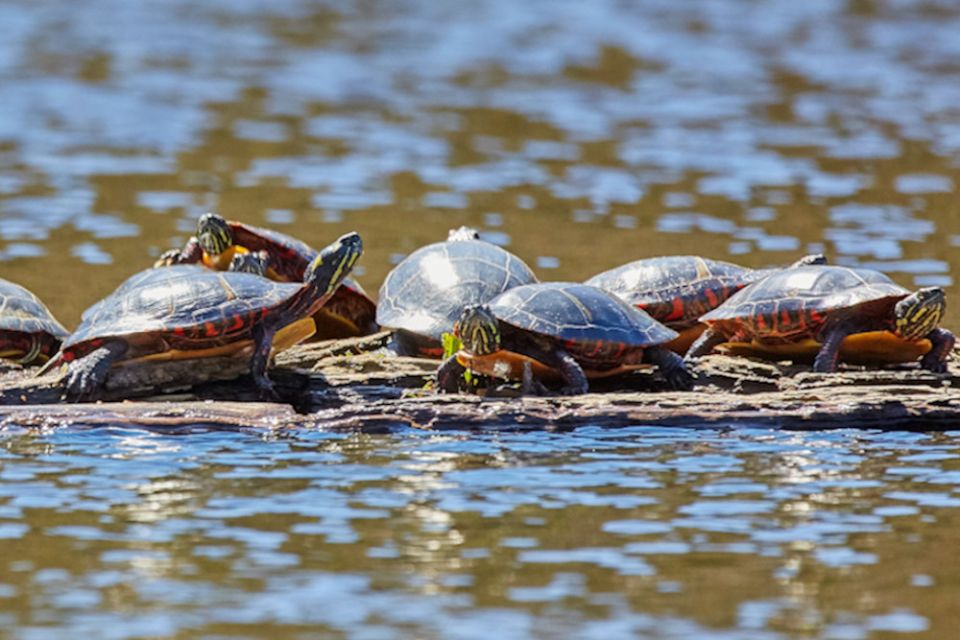 Ten springs ago, a mother turtle laid eggs in our flower bed. It was amazing to watch, as with her powerful legs she dug a hole about a foot deep, deposited the eggs and, within an hour, was gone. She smoothed the soil so perfectly it was as if she had used a whisk broom, erasing all traces of the secret treasure that lay buried deep beneath the earth. Never to return or to watch over the nest, she provided this last gift to the babies, her protective attention to detail.

Thus began my role as a vigil keeper. I studied up on the species of painted turtles and learned that the babies are born completely independent and able to live on their own. They thrive in wetland areas and can live for as long as 30 years. It takes 72 to 80 days for the eggs to hatch. I counted the days, marked it on my calendar and waited, keeping tabs on the nest often. I even took the flashlight and checked many times at night, when it was storming out.

Time passed. The babies did not emerge. I grew disheartened, thinking the eggs had been eaten by insects or had not reached maturity. Following blistering hot days, torrential rains poured down. The soil grew packed like cement, and still I kept vigil despite mounting doubt and feeling I was wasting my time. Day 80 passed and I thought, "Well, that's that. All that hoping and expectation for nothing." On Day 81, the soil was so compact I thought nothing could emerge from it and, feeling the turtles had never had a chance, took my garden spade and carefully turned over the soil.

Much to my surprise, I saw a clod of dirt gently move. What? Kneeling, I began sifting through the rock-hard soil, shocked to see that more clumps of mud were moving slightly. A grin spread across my face as I discovered seven baby turtles just a little bigger than the size of quarters. Carefully lifting them out of the hole, I placed them in a cake pan, whereupon they saw the first light of day ever beyond the dark, underground nest. Proudly, I pronounced the words, "Welcome to the world!"

It was such a sacred journey to care about the turtles, to hope that I might get to witness their emergence and to hold them in my hand for the first time. When I rinsed them with a little water, the mud washed off, revealing their bright orange, yellow and green colors. Only hours old, they grew in vigor, new exquisite creatures that came from nothing 82 days before. I wrote in my journal about how God, in great mercy, gives us new birth into a living hope from 1 Peter 1:3, reminding us to have a little faith and to believe in grace.

When the baby turtles were several days old, my husband and I released them in a nearby pond, following a candlelight prayer ceremony. With flashlight in tow, we said goodbye as they swam off into the depths and disappeared from sight into the inky black night.

I'd become attached to them and quite protective. Now, they were gone and I would never see their lively faces again. A thought entered my mind: "While they are out of sight, they are still present." After all, I could see the pond from our window, where they were thriving. It reminded me of God's unseen presence — invisible but very real just the same.

I continued to feel a sense of wonder and privilege that I had been a part of their saga. More than 20 friends and family wrote to say that they too were touched by it. Each had their own comment on what the story meant to them. One wrote about the wonder of birth and new life, another about resurrection following sadness, still another about how reassuring it is that life's timing is in God's hands — not ours. Another talked about the mother turtle's instinctive faith that in leaving the babies they would be all right, another about understanding what it feels like to try to climb out of a pit of mud.

Still others wrote of the spiritual symbolism of the flashlight as guiding beacon. Another asked for prayers when I released the turtles that she would be comforted in the grief of losing and letting go of her beloved son. I wrote down the names of every single person who responded and when we released the turtles into the wild, I read the list like a litany and offered specific prayers for each person. It was so important to me to do so.

It was such a sacred journey to care about the turtles, to hope that I might get to witness their emergence and to hold them in my hand for the first time.

For many years now, I have pondered the story of the turtles, wondering why it moved people so. I decided it was because of the happy ending. Life is filled with challenges, hardships, suffering and loss for all of us; we've all known heartbreak. The turtles' story ended with joy — a reminder that life is entwined with miracles of nature, messages of hope and simple delights in the moment that bring encouragement to our hearts when we least expect it and need it most.

Perhaps most significant to me was the instinctive desire the baby turtles had for freedom. They sensed that there was more to life beyond the cake pan and continually stood on their hind legs trying to claw the sides. They knew that confinement was holding them back from their true home.

We humans feel a sense of confinement or feeling trapped for many diverse reasons, too. Yet like the turtles, when seeing through the eyes of the soul, we know that earth is but a cake pan when one considers heaven and life beyond the veil.

This story appeared in the March 20-April 2, 2020 print issue under the headline: The joy of turtles .

Column | The joy of turtles

Portland editor wants magazine 'to move and startle and amaze'

The signs of salvation