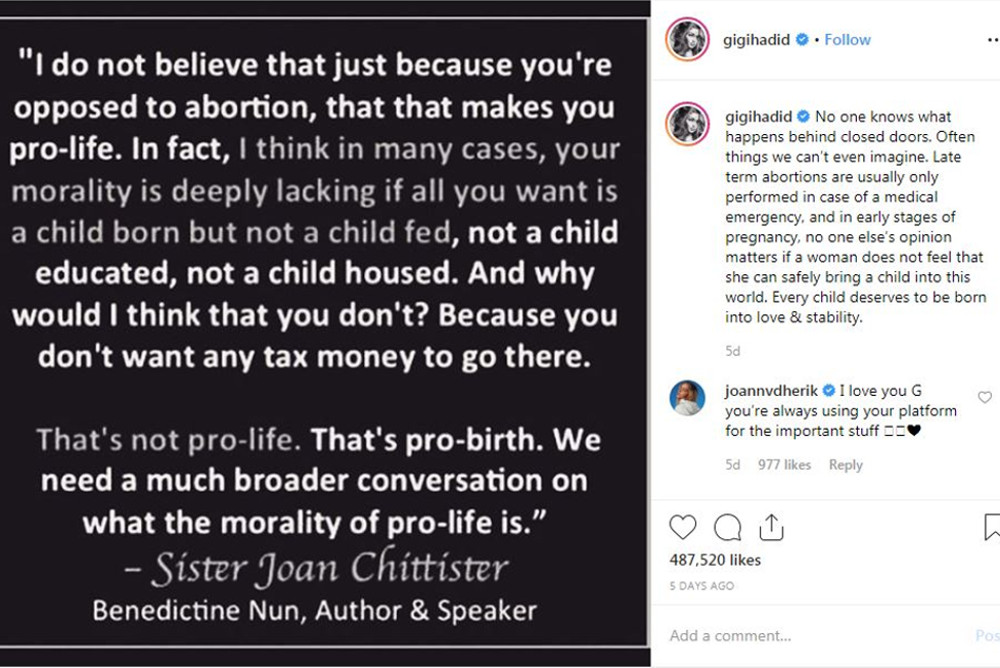 A recent Instagram post earned supermodel Gigi Hadid nearly a half a million likes, but it wasn't a photo of herself or of the latest fashion trend. It was a quote from Benedictine Sr. Joan Chittister on the importance of being more broadly pro-life, not just "pro-birth."

The quote — which Chittister confirmed she said during an interview with journalist Bill Moyers in 2004 — said:

"I do not believe that just because you are opposed to abortion, that that makes you pro-life. In fact, I think in many cases, your morality is deeply lacking if all you want is a child born but not a child fed, a child educated, a child housed. And why would I think that you don't? Because you don't want any tax money to go there. That's not pro-life. That's pro-birth. We need a much broader conversation on what the morality of pro-life is."

Chittister's quote has made the rounds on various social media outlets over the years and has resurfaced in recent weeks as several states have passed laws that severely restrict most or all abortions.

No one is more surprised that she has gone viral than Chittister herself, who thought the interview was something few people would watch. Yet she stands by her critique of a single-issue approach to abortion, which she still sees as "morally inconsistent."

"Do I still stand with that statement? You bet I do, probably stronger than ever, to be frank," Chittister told NCR on May 22.

While she describes herself as pro-life, Chittister questions why some who oppose abortion only seem to care about unborn babies as the sole "defenseless life" worth protecting. After babies are born, "they're ignored," she said.

"You have babies and pregnant mothers on the border. They're innocent and defenseless, but those babies are being separated and segregated," she said.

And many pro-life leaders do not consider defenseless casualties in war, she added.

"We're not worried about pregnant mothers in North Korea or Iran," Chittister said.

The comments that became a meme were part of a wide-ranging interview with Moyers in November 2004 in which he asked about the role of religion, the religious right and moral issues in the previous week's presidential election that re-elected President George W. Bush.

Chittister said the killing of innocent pregnant civilians was equivalent to "military abortion" and issued her call for a broader pro-life perspective. Her first statement, which is not part of the meme, was: "I'm opposed to abortion."

Have things changed since the 2004 interview? Only that anti-abortion activists are "absolutizing" the debate by "allowing no distinctions whatsoever" in laws that have no exceptions for rape or incest, for example, she said.

"It's hard to believe that there is never any medical reason whatsoever — ectopic pregnancies, for instance — that would not indicate that there are some moments when the moral nature of the act at least fits," she said.

Such "absolutizing" seems only to apply to policies that affect women, Chittister said.

"I frankly cannot understand why women's health issues or abortion is absolutely the only life issue that the church has not nuanced," she said.