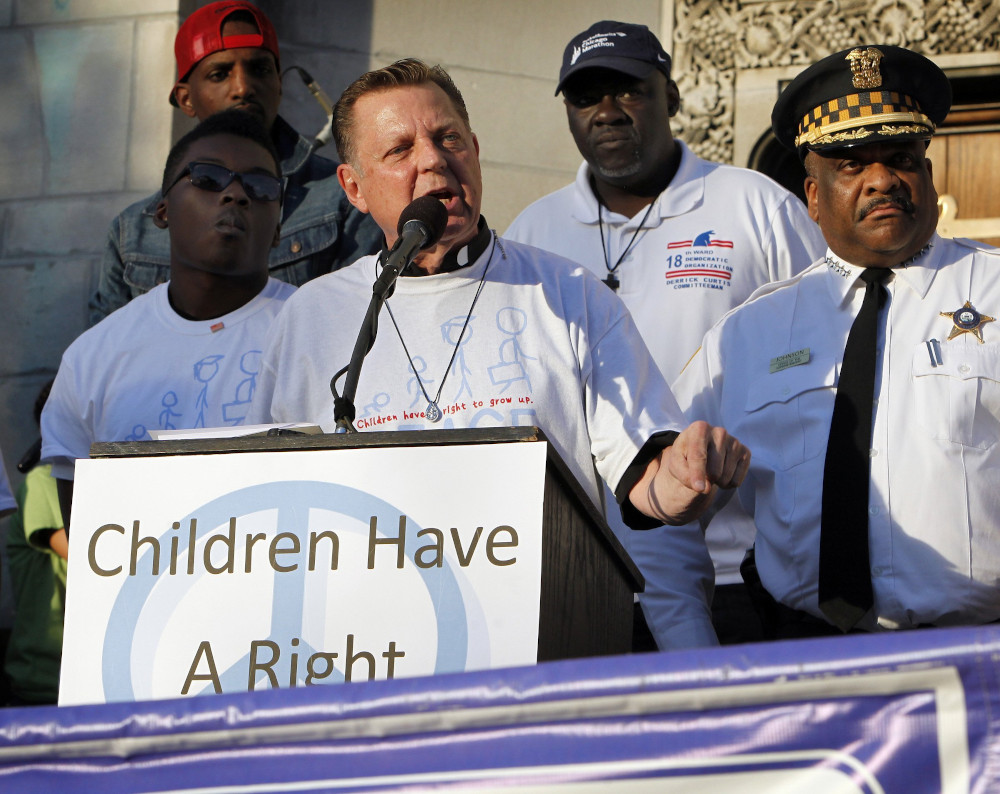 A prominent Catholic parish in Chicago denounced abuse allegations against its popular pastor and demanded an investigation into those allegations be resolved quickly.

"God would not have blessed this ministry for over 40 — close to 50 years — if something dark needed to come to light," Kimberly Lymore, associate minister at St. Sabina Parish, said during a service on Oct. 16.

Fr. Michael Pfleger, the longtime pastor of the predominantly Black congregation, has been temporarily removed from ministry after the Archdiocese of Chicago received an allegation of abuse against him. The alleged abuse of a minor— which comes less than two years after Pfleger was cleared of separate abuse accusations — is more than 30 years old, according to a letter from the diocese.

Pfleger was reinstated as pastor of St. Sabina in May of 2021 after an archdiocese review board cleared him of previous allegations of abuse. Known for his dynamic preaching and activism against gang violence and injustice, Pfleger, who is white, has led St. Sabina since the early 1980s and is one of the best-known clerics in Chicago.

"Let me be clear, I am completely innocent of this accusation," Pfleger wrote in a letter to the parish, which was read during the Sunday Mass. "While I am confident that the new allegations will be determined to be unfounded this process is so unfair and painful to me and to the community I serve."

Pfleger stepped down in January 2021 after two brothers accused him of abusing them 40 years earlier when they were minors, but he was later reinstated. The new allegations also involve abuse of a minor, this time from more than 30 years ago. He has denied all allegations.

Church members responded to his past suspension over abuse allegations by staging rallies on his behalf and threatening to withhold donations to the archdiocese.

The popular priest is no stranger to controversy. He took a leave of absence in 2008 after criticizing then-presidential candidate Hillary Clinton during a church service and then was suspended in 2011 during a clash with former Chicago Cardinal Francis George, who tried to reassign him.

"As is required by our child protection policies, the allegation was reported to the Illinois Department of Children and Family Services and the law enforcement officials," Cupich wrote. "The person making the allegation has been offered the services of our Victim Assistance Ministry and the archdiocese has begun its investigation and we will do our best to keep you informed."

After reading the letter, Walsh crumpled it up and seemed ready to discard it, then said, "Whoops, sorry."

"Now let's hear from the man," Walsh said, before having Lymore come up to read a letter from Pfleger.

After reading Pfleger's letter, in which the priest criticized the archdiocese for treating accused priests as "guilty until proved innocent," Lymore said the parish remained loyal to its pastor and committed to its ongoing ministry.

In an email to RNS, Lymore said she did not see Walsh crumple the cardinal's letter and could not speak to his intentions. She also said in a phone interview that the church does not believe the allegations are credible.

During the service on Oct. 16, church member Glenda Lashley prayed for the person making the allegations of abuse, that they would be released from "whatever manipulation spirit is controlling them."

A statement on behalf of Walt Whitman Jr., director of the Soul Children of Chicago, a choir that rehearses at St. Sabina, was also read at the service, as the allegation of abuse involves someone who had been involved with that choir.

"Dr. Walter Whitman and the Soul Children denounce the recent allegation and support Father Pfleger as a man of integrity," read the statement, which is posted on the parish's Facebook page.

He said he was dismayed at the response by St. Sabina to the allegations, adding that church leaders still refuse to hold abusers accountable.

"For any church official, any church administrator to dismiss allegations that have been brought forth or to treat them as a piece of trash shows how ignorant they are toward clergy sex abuse survivors and to the scandal itself," he said.

During the service Walsh turned his sermon into a full-throated appeal in support of Pfleger, comparing him to the biblical figure Moses. He urged the congregation to continue to pray for their pastor.

Then he had the congregation turn to the web camera at the back of the church and raise their hands in prayer.

"Father Mike, this is your army," Walsh said. "These are your warriors. This is the persistence of a people who believe in the power of God. Who have faith and who want you to know that you're not going to go through this alone."