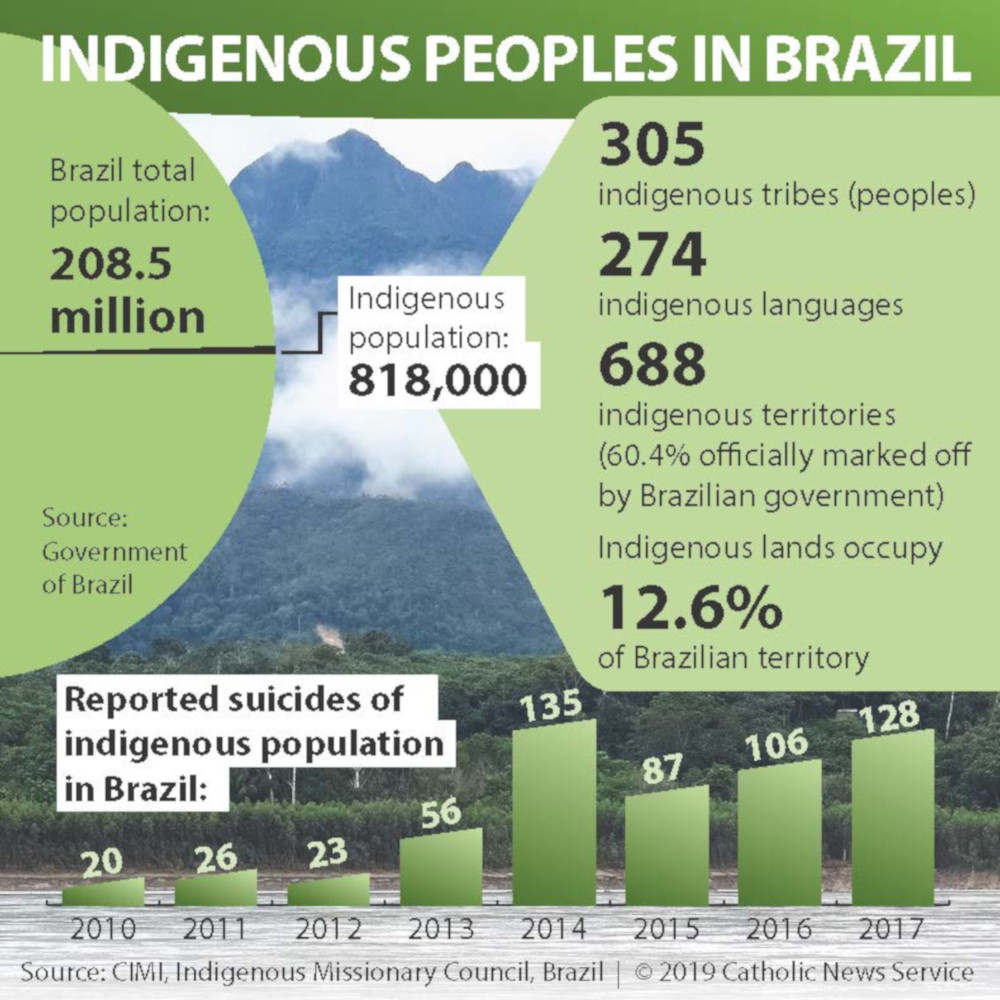 Pressure from land conflicts and decline of expectations and perspectives have led the indigenous populations in Brazil to register some of the highest suicide rates in the country, said the Indigenous Missionary Council, linked to the Brazilian bishops' conference.

"It's terrible," said Roberto Liebgott, lawyer and one of the coordinators of "Violence Against the Indigenous Peoples of Brazil," released in late September by the missionary council, known by its Portuguese acronym as CIMI.

"There is judicial insecurity, due to the delay of land demarcation, as well as an overwhelming insecurity about the future due to the violence suffered by the indigenous," said Liebgott.

A World Health Organization report released Sept. 9 showed the rate of suicide in the Brazilian population in 2016 was 6.1 deaths per 100,000 inhabitants, but the rate of suicides among indigenous was more than double that, it said.

Missionary council officials noted that, based on official government data, there were 101 suicides among indigenous in Brazil in 2018, but Liebgott said that these are only partial numbers. "The Ministry of Health released a partial number, the final number we will probably only have in 2020," said the council's corroborator.

Anthropologist Lucia Helena Rangel, who along with Liebgott conducted the research for the missionary council's violence report, said, "In the last decade, the deterioration of the social/economic situation of the indigenous populations has increased, and we have seen an increase in suicides."

Rangel said that, since 2015, the situation has deteriorated even further.

"There has been a very strong, generalized and explicit rejection of the indigenous population," she said.

This stress of fighting for the demarcation of land, fighting off farmers and loggers from already designated territory and being moved around and clustered together with other groups of indigenous has been overwhelming, said Rangel.

One of the most representative cases has been of the Guarani-Kaiowa population in southern Mato Grosso do Sul state. Since 1960, the state has placed more than 45,000 indigenous together from different groups – although they are from the same tribe – in eight reserves.

"There are indigenous today living on the side of highways, along the fences of huge farms, waiting for their ancestors' lands to be demarcated so they can return to their 'home,'" said Rangel.

"Some have been living in these conditions for years," she said, adding that she believes the lack of prospective land demarcation only increases tension and conflict among the indigenous peoples, leading many to despair and some to suicide.

The anthropologist sees two possibilities for these indigenous: either give up all together or combine forces and fight.

"We have seen mobilizations both here and abroad in support of these indigenous, which makes me hopeful. The (Oct. 6-27) synod in Rome may help call even more attention and may help these vulnerable populations," said Rangel.