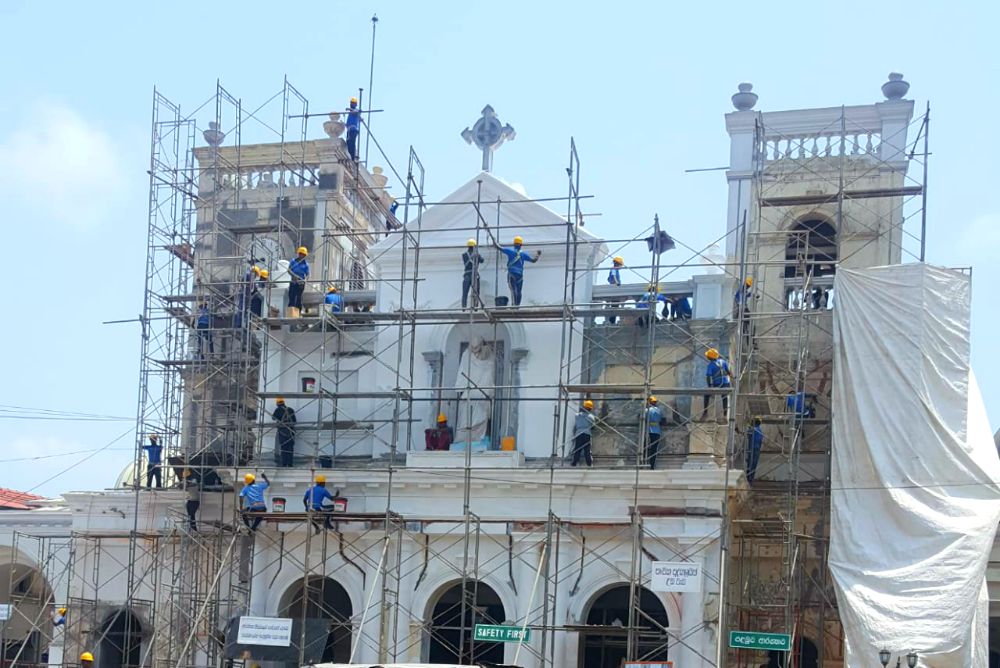 Churches in the Archdiocese of Colombo, Sri Lanka, resumed Sunday Masses on May 12, three weeks after a series of bomb blasts killed hundreds.

"It was a great solace for our family to attend Mass in our parish church after three weeks. We had never missed a Sunday Mass in the past," said Kishan Peiris, who attends St. John the Baptist Church in Kalutura, around 25 miles south of Colombo, the nation's capital.

Peiris, an informational technology professional, said he offered the Mass for the soul of his uncle who was killed in the bomb blast in St. Sebastian's Church in Negombo, 23 miles north of Colombo.

The resumption of Sunday Masses in the Colombo Archdiocese was announced on May 9 by Cardinal Malcolm Ranjith, head of the Catholic Church in Sri Lanka. The cardinal left it to the other 11 bishops in the country to decide when to resume Masses in their respective dioceses after reviewing security concerns.

All of the country's bishops, along with Sri Lankan President Maithripala Sirisena, attended the May 9 press conference. The president said the country was back to normal with the arrest of more than 150 suspects and the death of the bombers, who were either killed by the bombs or by police.

Ranjith also promised to reopen Catholic schools in the archdiocese on May 14, signaling a return of normalcy.

Sunday Masses in Catholic churches across Sri Lanka were first canceled by Ranjith after attacks on Easter, April 21, killed 258 people, mostly churchgoers. The Islamic State has claimed responsibility for the bombings.

Besides St. Sebastian's Church in Negombo, St. Anthony's Shrine in Kochchikade, a Colombo suburb, was targeted. Also attacked was a Protestant church in Batticaloa on Sri Lanka's eastern coast, 200 miles northeast of Colombo.

The blasts also wounded more than 500 people with many still undergoing treatment in various hospitals.

On May 13, sectarian clashes were reported from various parts of the country, especially from Christian-dominated regions such as Negombo and Chilaw, 30 miles north of the capital.

A day earlier, a mob reportedly attacked several mosques and Muslim shops in Kurunegala, around 60 miles northwest of Colombo, forcing the government to again impose curfew throughout the country. The government also blocked social media platforms to stop the spread of rumors.

Masses resumed in Colombo churches on May 12 amid high security. Soldiers and police, armed with automatic rifles, were seen guarding churches. Parking near churches was banned.

Roshni Fernando, who attended Mass with her family at St. Mary's Church in Dehiwala, downtown Colombo, said parishioners had to undergo screening, body checks and identity verification by the army, police and parish security teams.

"I have never had such a difficult entry to our own parish church, a place which we always considered as safe and peaceful," Fernando, 32, told NCR. "However, I felt really happy and fulfilled after attending the Sunday Mass."

The Colombo Archdiocese advised churches to appoint vigilance committees comprising of parishioners who will liaise with police and security forces to ensure security of the congregation, said Fr. Edmond Thilakarathna, spokesman for the Sri Lankan Church.

The priest told NCR that the security is still a concern in the country as intelligence reports indicate fresh attacks on Christians. 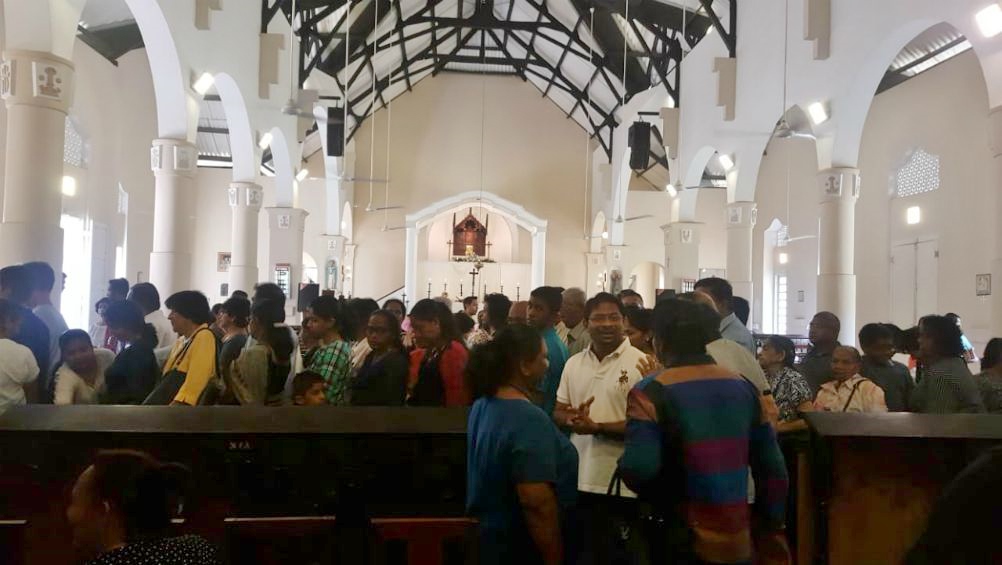 Most churches started the Mass with a special prayer for the victims of the attacks. A healing ceremony was also organized to counsel the faithful.

Ranjith repeatedly reasserted that the church does not consider Muslims as enemies of Christians and the Easter attack was "an act of some youth who were brainwashed by jihadist ideology."

Shyami Sirivardane, a Catholic who is married to a Buddhist, told NCR that the cardinal's call for peace at the Mass has had great impact on his Buddhist friends.

Fr. Lawrence Ramanayaka, director of Caritas Colombo, the church's social justice arm, said the organization is helping families affected by the bombings. The government also announced compensation to the families of the dead and the injured, he told NCR.

Caritas Colombo has joined the Conference of Religious Major Superiors in Sri Lanka to develop a master plan for socioeconomic and psychological support of the affected families. Each family has been put under the care of a team comprising a priest, a nun, a psychologist and a lay person.

"The immediate priority is to support families that have lost earning members, help children who lost their parents to continue education, and offer continuous emotional and psychological support to bereaved families," Ramanayaka said.

Donations are pouring in from communities and institutions across the country. Catholic communities abroad are also supporting the church's efforts to rehabilitate and rebuild the affected community.

The blasts occurred as the Sri Lankan church was leading a reconciliation process through Caritas Sri Lanka and Conference of Religious Major Superiors between minority Tamils and majority Sinhalese. The two leading ethnic groups in the country were engaged in a civil war for 26 years, starting in 1983, that has left more than 100,000 dead.

Several cases are now pending before the Human Rights Council, an international court, on human rights violations committed at the end of the war.

K. Theivenddrarajah, senior program manager of Caritas Sri Lanka, claims the church's efforts have helped improve relations between the two communities. "There have been no ethnic clashes reported anywhere since the end of the war," he told NCR.

Sr. Niluka Perera, leader of the justice and peace commission in the Our Lady of Charity of the Good Shepherd congregation, said the congregation pioneered special camps for both Sinhala and Tamil children creating positive results.

"Later, the major superiors' body took over the program and reconciliation process is still underway," she told NCR. 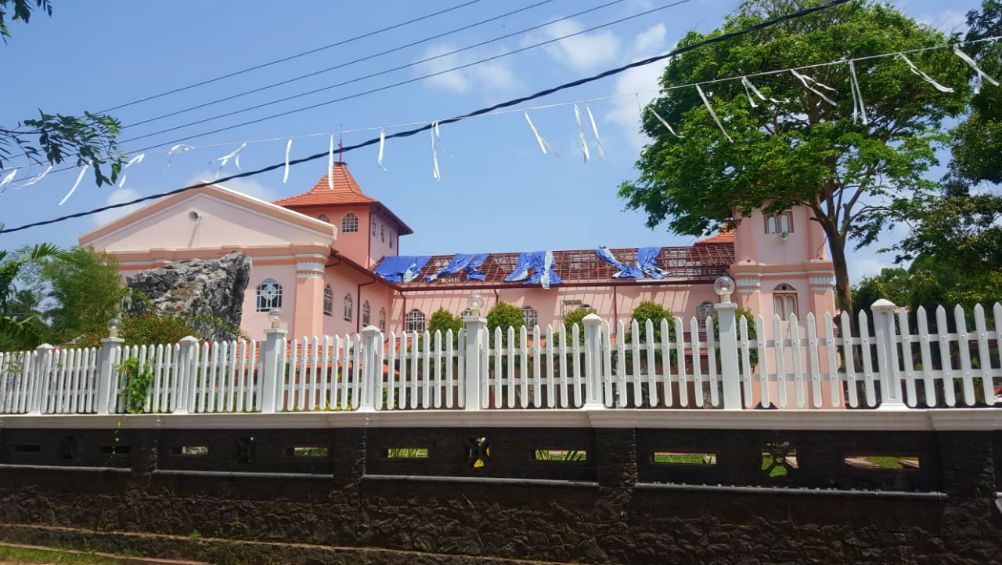 Sri Lanka now faces a new challenge from Islamic State and associated jihadi organizations in the country. The police have seized weapons, swords and bombmaking equipment in raids across the island and have arrested more than 150 suspected terrorists.

"There was intelligence information from India and U.S. about the possible attacks on churches and hotels on Easter day, but the local government failed to take any precautions," alleged Ranjith during his special Mass on April 28. He has repeated the allegation on several occasions.

But the Sri Lankan Supreme Court declared the president's action illegal and allowed Wickramasinghe to continue as prime minister.

"This lack of coordination between two heads of the state has weakened the country's security conditions," Nuwan Bulathsinhala, a Negombo-based political observer, told NCR.

[Thomas Scaria is a senior journalist based in India who worked until recently in Sri Lanka with an inter-governmental organization. He writes for Matters India, a news portal that focuses on religious and social issues and collaborates with Global Sisters Report.]